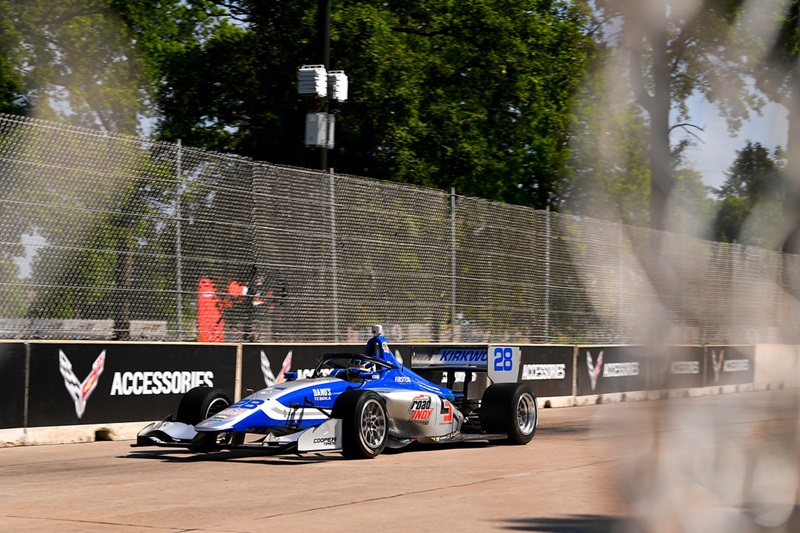 Kyle Kirkwood will start from pole position for the first of two Indy Lights Presented by Cooper Tires races this weekend at The Raceway at Belle Isle after posting the fastest time in qualifying this afternoon for Andretti Autosport. This is the second Cooper Tires Pole Award of the season for Kirkwood, from Jupiter, Fla., who also set the pace during qualifying on the series’ earlier visit to a temporary circuit on the streets of St. Petersburg, Fla., in April.

Fellow rookie Linus Lundqvist (Global Racing Group with HMD Motorsports), from Stockholm, Sweden, will start on the outside of the front row, while championship leader David Malukas (HMD Motorsports), from Chicago, Ill., will line up fifth after rebounding impressively from a crash during the opening practice session this morning.

Kirkwood, 22, who is seeking to become the first driver to win championships on all three levels of the Road to Indy development ladder after securing the Cooper Tires USF2000 Championship crown in 2018 and the Indy Pro 2000 Championship Presented by Cooper Tires title the following year, laid down a marker by posting the fastest time in this morning’s practice at 1:24.2423. He found almost a full second in the closing moments of this afternoon’s 30-minute qualifying session, topping the charts with a lap at 1:23.2582, an average speed of 101.612 mph.

“This is a fun track, it’s everything I expected it to be – it’s just a lot hotter than I expected it to be,” said Kirkwood. “This car doesn’t absorb the bumps as well as an Indy car or a GTD car does, so it’s tough out there, very physical. That’s one of the track’s main characteristics. We started off with a bit of an edge since we’re able to apply some of the Andretti Indy car setup information because the two cars are fairly similar. But it seems as though everyone else has figured it out because Linus really kept me on my toes. It was the same thing that happened this morning in trading times back and forth with Alex Peroni. He’s unreal on street courses. He did well in Europe and he’s doing well over here. But we’ve learned the track quickly, I’ve got a good car and I’m driving well, so happy to get another pole for the team. Tomorrow, my goal will be to keep our pace, race well, make no mistakes and, of course, lead that first corner.”

Lundqvist, who already has won twice this season, was only 0.1716 of a second slower, and will start from the front row of the grid for the fifth time in seven attempts.

Indy Lights veteran Toby Sowery, from Cambridge, England, backed up his performances last month on the Indianapolis Grand Prix road course by being third fastest today for Juncos Racing. He will be joined on the second row of the grid by Australian rookie Alex Peroni, who equaled his best starting position of the young season for the Carlin team.

Following contact at Turn 13 four laps in to the opening practice session which resulted in significant damage to the #79 entry, Malukas and his HMD squad impressed by posting the fifth quickest time. He will line up on the third row alongside Singapore’s Danial Frost of Andretti Autosport.

Tomorrow’s race will see the green flag at 12:10 p.m. EDT, immediately prior to the first of two NTT INDYCAR SERIES races this weekend. A separate qualifying session tomorrow at 9:30 a.m. will set the grid for Sunday’s second Indy Lights encounter. Coverage can be found on Peacock Premium in the U.S., on REV TV in Canada and internationally on The Race YouTube channel, the Road to Indy TV App and at RoadToIndy.TV and indylights.com.