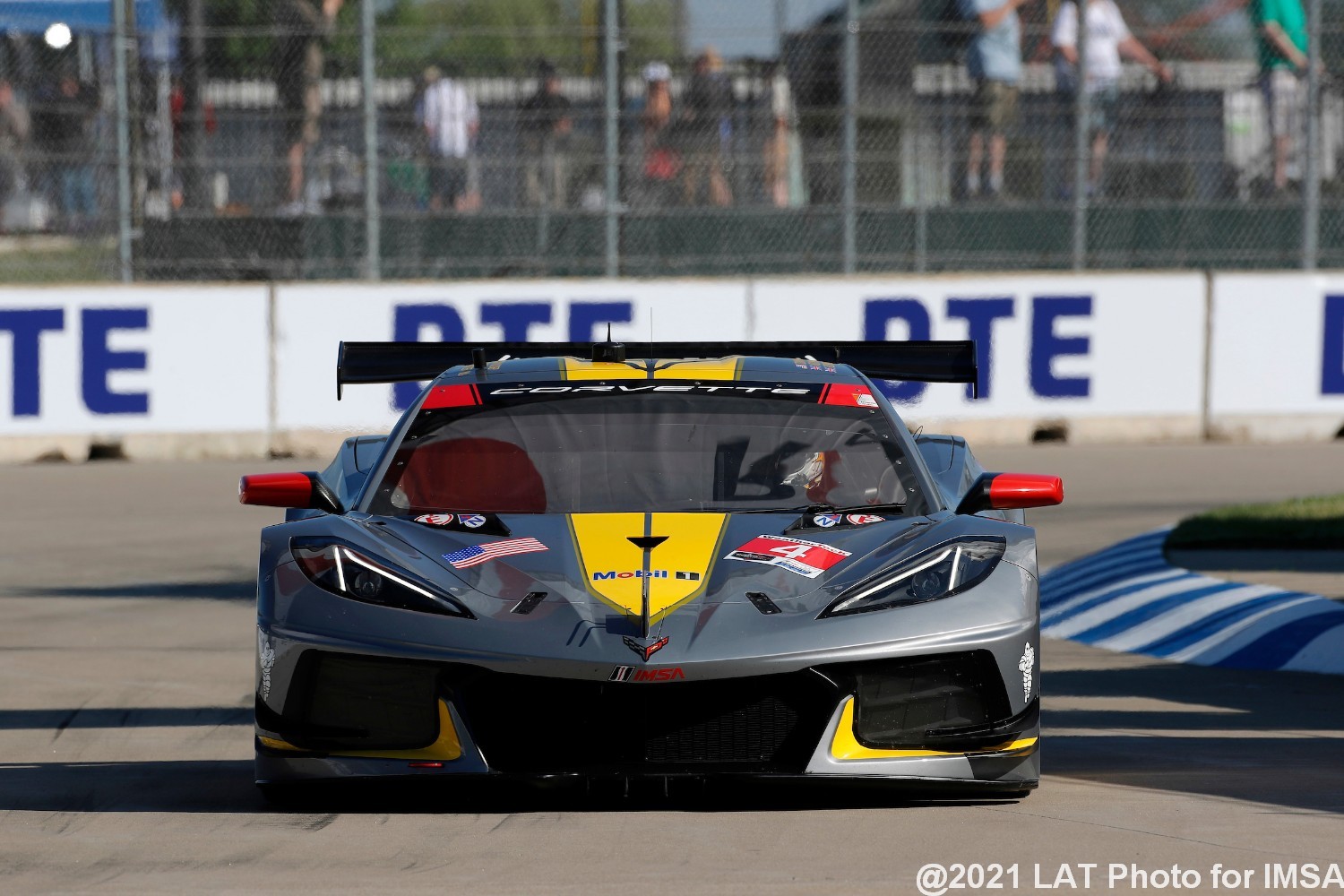 Nick Tandy set the fastest time for Corvette Racing ahead of the Chevrolet Sport Car Classic on Friday, just beating out Jordan Taylor in a battle of mid-engine Chevrolet Corvette C8.Rs.  No other GTLM cars showed up for the race in protest.

Corvette Racing’s home event became possible with the move of the 24 Hours of Le Mans from mid-June to mid-August. It’s the team’s first IMSA race since the Mobil 1Twelve Hours of Sebring in March and is a nice warm up ahead of a busy stretch of four races in six weeks, plus the return to Le Mans.

NICK TANDY, NO. 4 MOBIL 1/SiriusXM CHEVROLET CORVETTE C8.R – GTLM POLE-WINNER: “It wasn’t easy. Driving around any street circuit is pretty challenging. We had a tough practice this morning but we managed to make some changes for qualifying. This Corvette was on rails. We took it easy at the start and brought in the tires nicely. To grab the pole is a great thing for our team on our side of the garage. In a home race and in front of the whole General Motors and Chevrolet, it’s awesome to do.

“The thing to do in order to improve for the rest of the season is to treat this as a full race event. OK, there are only two cars in our class but we will execute as a normal race. There will be inter-team competition. We want to put on a show for the fans and show them what the Corvette C8.R can do on the racetrack.

“It’s great for the team and Corvette Racing to be here and show this car off to people who perhaps wouldn’t have been able to see it at a different track. There are a lot of people from Chevrolet and across the company who have been working on the street car and the race car. Hopefully there will be some of them who will get to see the car in action that wouldn’t have been able to otherwise. It’s a huge event for us, and we are thankful the schedule and IMSA allowed us to show off this great race car.

“We are treating this as a bonafide race event. We’ve been way for quite awhile since Sebring and we didn’t race Mid-Ohio. The schedule is going to get very busy coming up looking at the doubleheader at Watkins Glen and then a few additional races in a short time. Operationally, we wanted to get back in the swing of things. The briefing in qualifying was to make the car as fast as we possibly could and drive it as fast as we possibly could because we will go to another street circuit later this year. It was good fun driving on this street circuit for the first time this morning. Putting sticker tires and low fuel this afternoon made it that much more enjoyable.”

JORDAN TAYLOR, NO. 3 MOBIL 1/SiriusXM CHEVROLET CORVETTE C8.R – QUALIFIED SECOND IN GTLM:“It’s been very helpful being on track today. It’s the first time we’ve run this Corvette on a street circuit, so before we go to Long Beach it’s good to get some testing done here. Things like the car over the bumps and small little details like launch controls, throttle positions and engine mapping. There is work going for reliability also. The more miles we can put on the C8.R the better ahead of Le Mans.”