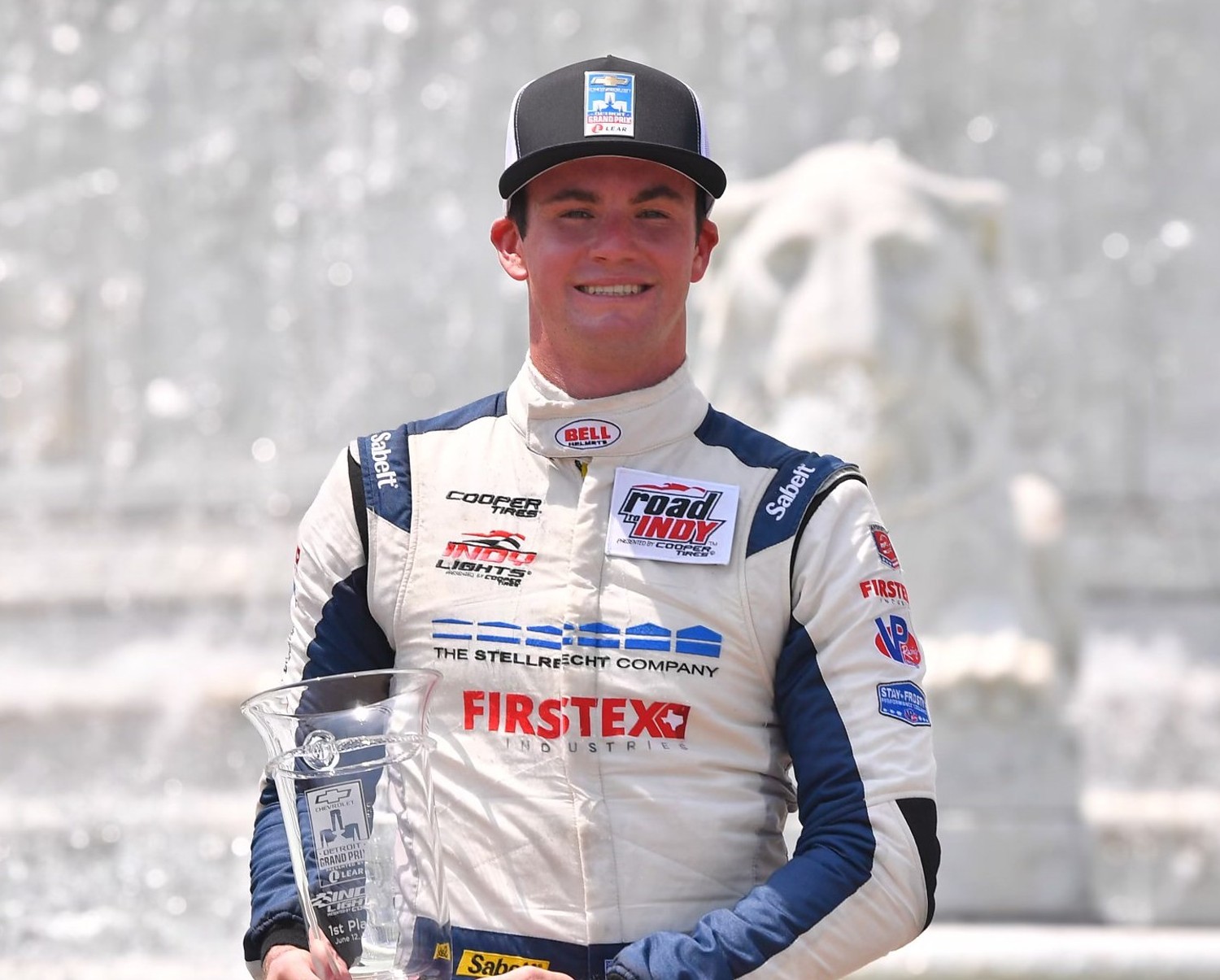 Kyle Kirkwood, driving for Andretti Autosport, today won the opening leg of the Indy Lights Grand Prix of Detroit Presented by Cooper Tires double-header at the challenging The Raceway at Belle Isle Park. The native of Jupiter, Fla., led throughout the 25-lap race, albeit under pressure for the entire distance from Sweden’s Linus Lundqvist, who finished just over a half-second in arrears for the Global Racing Group with HMD Motorsports team.

Kirkwood, who earned his opportunity to graduate into Indy Lights by winning the 2019 Indy Pro 2000 Championship Presented by Cooper Tires, started on the pole position after securing his second Cooper Tires Pole Award of the season during qualifying on Friday.

After the first attempt at a start was waved off due to the field not being in close enough formation, Kirkwood took full advantage of his inside front row starting position to lead into Turn One. The rest followed largely in grid order with Lundqvist in second ahead of Sowery, Australian Alex Peroni (Carlin) and David Malukas, from Chicago, Ill. The championship leader did well to qualify fifth after making a mistake only a few laps into the opening session on Friday morning, inflicting heavy damage to his HMD Motorsports Dallara-AER IL-15.

Kirkwood increased his advantage over Lundqvist to as much as 1.8 seconds inside the opening four laps as the leaders gradually increased their pace. Each of Kirkwood’s first 10 laps around the demanding 2.35-mile, 14-turn temporary circuit was quicker than the previous one, but still Lundqvist remained a factor in his mirrors.

All of the top four runners – plus Denmark’s Benjamin Pedersen (Global Racing Group with HMD Motorsports), who was running eighth after losing a position at the start to Robert Megennis – took a turn at posting the fastest lap during the opening eight tours before Kirkwood and Lundqvist began to assert their authority.

Each time one would go faster, the other would respond. Kirkwood, though, remained in control at the front, and even though Lundqvist kept piling on the pressure – and was able to establish a new lap record at 1:22.4535, an average speed of 102.603 mph, Kirkwood kept his cool and his advantage. His eventual margin of victory was 0.5174 of a second.

Sowery couldn’t match their pace in third, but was nevertheless pleased to have earned his third successive podium finish, with Peroni hot on his tail.

Malukas maintained his championship lead with a steady drive to fifth after holding off a late challenge from Singapore’s Danial Frost (Andretti Autosport).

The closest battle of the race took place in their wake with Megennis and Pedersen exchanging places a couple of times before the Dane slipped down the order. Megennis then had his mirrors filled by both last year’s Indy Pro 2000 champion, Sting Ray Robb (Juncos Racing), from Payette, Idaho, and Italian-Canadian Devlin DeFrancesco (Andretti Steinbrenner Autosport) who had started 11th. An incident in Turn Five with a couple of laps remaining inflicted damage to the cars of both Robb and Megennis, which allowed DeFrancesco to move into seventh thereby earning the Tilton Hard Charger Award.

A separate qualifying session earlier this morning determined the starting positions for tomorrow’s eighth round of the Indy Lights Presented by Cooper Tires season. It was Lundqvist who set the fastest time at 1:23.5678, despite a couple of red-flag stoppages. The Swede’s third pole of the year will give him an opportunity to continue the unbroken streak of wins from the pole this year when the race begins at 10:35 a.m. EDT.

Coverage can be found on Peacock Premium in the U.S., on REV TV in Canada and internationally on The Race YouTube channel, the Road to Indy TV App and at RoadToIndy.TV and indylights.com.

Provisional championship points after 7 of 20 races:

Kyle Kirkwood (#28 Road to Indy/Cooper Tires/Construction Contractors’ Club-Andretti Autosport Dallara-AER IL-15): “It’s crucial that we got the pole yesterday and this win today to get maximum points. It’s going to be close at the end of the season. We rolled off the truck quick, which is everything at a track like this. It gave us a nice edge and gave me plenty of confidence, and I learned the track quickly because the car was so good. The track changes so much so it’s hard to make a change to the car and predict what the car will do. This is the first time we’ve run on a track that had three different tire compounds (from the INDYCAR and IMSA series). I spoke with James Hinchcliffe and Rinus VeeKay and they said that their cars are starting to gain front grip and we are too, so we might have to tune to that for tomorrow. It’s hard to pass here, but hopefully we can make something happen from third.”

Linus Lundqvist (#26 HPD/Global Racing Group/FX Airguns/Paytrim/JULA-Global Racing Group w/HMD Motorsports Dallara-AER IL-15): “This series is so close that around a track like this, it’s hard to overtake. Your only chance is if the guy in front makes a mistake or if the tires fall off massively, and neither of those things happened today. I had to be a bit defensive with Toby early, but then we got into a rhythm and tried to put some pressure on Kyle. I used the push-to-passes that I had toward the end, but he was just a bit too quick for us today. We got better and better throughout the race so hopefully we can push even earlier tomorrow since we know the tires can handle it. But it was definitely hot out there, especially with all the bumps – it was nice to be in the fountain at the end. It makes it special, there’s no track like this.”

Toby Sowery (#51 m-start/Kumpf-Juncos Racing Dallara-AER IL-15): “We’ve never been here before, so every lap counted in practice and qualifying. You have to make sure everything you do is going in the right direction. We’re all on the same page, but (some of these guys) raced Indy Pro 2000 last year and I had a season off. We’re working on that consistent progression because that’s what wins championships. I’m pretty hot and sweaty now, but it’s good fun – it’s physical and it’s a challenge. My hands are sore, but the INDYCAR guys have it a lot worse than us.”