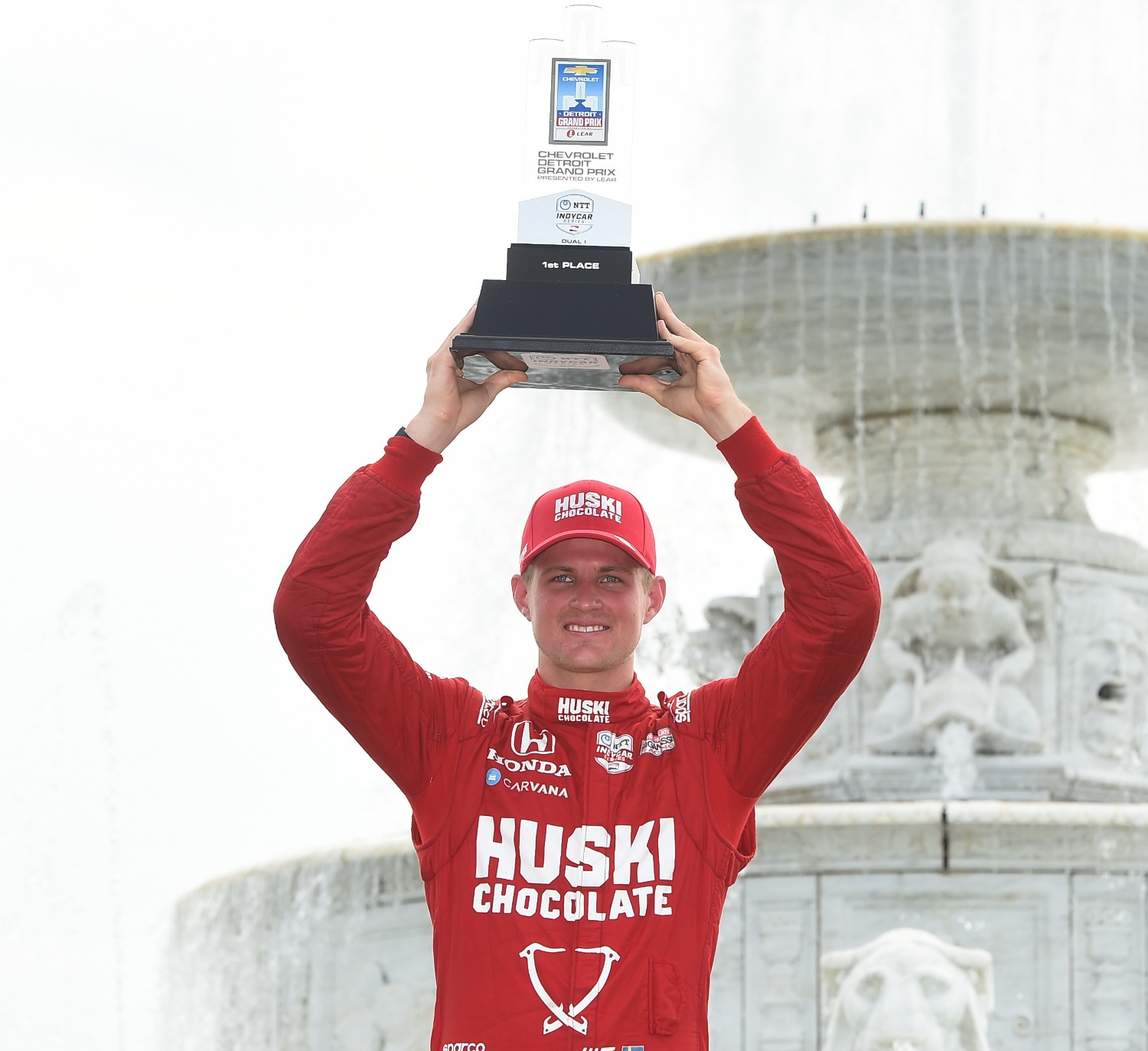 After the 2nd red-flag and a 3-lap shootout, #8 Ganassi Honda driver Marcus Ericsson held off Ed Carpenter’s Rinus Veekay by 0.69s to win his very first IndyCar race in the first half of the Detroit GP doubleheader.

Ericsson had not won a race in a decade, since his GP2 days.

Ericsson took the lead on pit lane when the No. 12 Verizon 5G Team Penske Chevrolet of leader Will Power would not restart after the red flag period on a humid, sunny day with an air temperature of 80 degrees. That apparent electrical control unit malfunction completed Ericsson’s charge from a disappointing 15th starting position, as the last five laps of the race – including two under caution – were the only circuits Ericsson led all day.

Swedish driver Ericsson pulled away from VeeKay’s No. 21 Sonax/Autogeek Chevrolet over the closing three laps under green of the 70-lap race, winning by 1.7290 seconds at an average speed of 93.509 mph. NTT P1 Award winner O’Ward was third in the No. 5 Arrow McLaren SP Chevrolet, 1.9105 seconds behind Ericsson.

“For once, things fell my way,” Ericsson said. “It feels really good. For Will, I feel really bad for him with the way it ended for him. He did a tremendous job today. But it was my day today, and it was about time.”

Polesitter Pato O’Ward passed Takuma Sato with 2 laps to go to get the final podium position.

Will Power, who was leading when the 2nd red flag came out with six laps to go when Romain Grosjean hit the wall, looked like he was going to win, but the Chevy engine in the #12 Verizon 5G car would not restart on pit lane.

Earlier the race was red-flagged after 27 of 70 laps due to a scary accident involving Arrow McLaren SP driver Felix Rosenqvist.

Rosenqvist was running alone when his throttle stuck wide open sending him head-on into the tire wall in Turn 6. The force was so great the concrete wall behind the tire wall was knocked over.

He was awake and alert with no life-threatening injuries, but he was placed on a backboard and sent to the hospital for x-rays on his legs and back.

Formula One veteran Ericsson also became the seventh different winner in the first seven races this season, a feat last achieved in 2017 and a milestone reached only in five prior seasons in the series’ century-long history. He is the fourth first-time career winner in 2021, joining Alex Palou, O’Ward and VeeKay.

Power and Ericsson were the dominant drivers in the closing stages of the race. Less than a second separated them once Power took the top spot on Lap 54 when leaders Rahal and RLL teammate Santino Ferrucci – on a different pit stop cycle – pitted on Lap 53.

A hotly anticipated closing duel between 2014 series champion and 39-time INDYCAR SERIES race winner Power and Ericsson vanished when Grosjean hit the wall in Turn 9 on Lap 64. Series officials decided to halt the race under red-flag conditions, with all cars entering the pits. After a break of seven minutes, 29 seconds, the race resumed – without Power at the front of the field.

His ECU apparently malfunctioned, and his Team Penske crew could not start the car. The crew quickly installed a new ECU, and a dejected Power returned to the track and finished 20th, three laps down.

“It was very disappointing in how the race ended for us. Everyone on the No. 12 Verizon 5G Chevy team worked incredibly hard to put ourselves in position to get a win that we desperately needed. There are definitely things that can be looked at when there is a red flag that late in the race. It’s something that we have to put behind us, though, because we have another race tomorrow and we have shown we have a car that can win.”

“I’m mad at IndyCar because I’m the first car in and they wait for the last car to come to get a fan on that car and it roasts the ECU,” said Power.

“And just going red flag for starters… like, the guys up there in race control never listen to any drivers. They never listen. They don’t care.

“We’ve given them so many good suggestions and they don’t care.

“I worked my arse off today, [just] to have this happen. Like I’m screaming on the radio, ‘We need a fan, get a fan…’ because ECU always overheats.

“They wait for everyone. These guys have still got air coming in their car.

“You work your arse off in this sport, so much money goes into it and it’s just dumb decisions like that.

“If it’s not a yellow they throw, it’s some stupid idea like this, a red flag.”

Visibly animated, Power threw his towel down in disgust after being cost a possible 40th series win.

It was a tough day for the top two drivers in the standings entering this race, Chip Ganassi Racing teammates Palou and Dixon. Palou finished 15th after starting last in the 25-car field in the No. 10 The American Legion Honda, while Dixon ended up eighth in the No. 9 PNC Bank Grow Up Great Honda.

Palou led Dixon by 36 points entering this event, but that lead was sliced to just 15 over O’Ward, who leaped over Dixon into second. Palou has 263 points, O’Ward 248 and Dixon 237. VeeKay is fourth with 231.