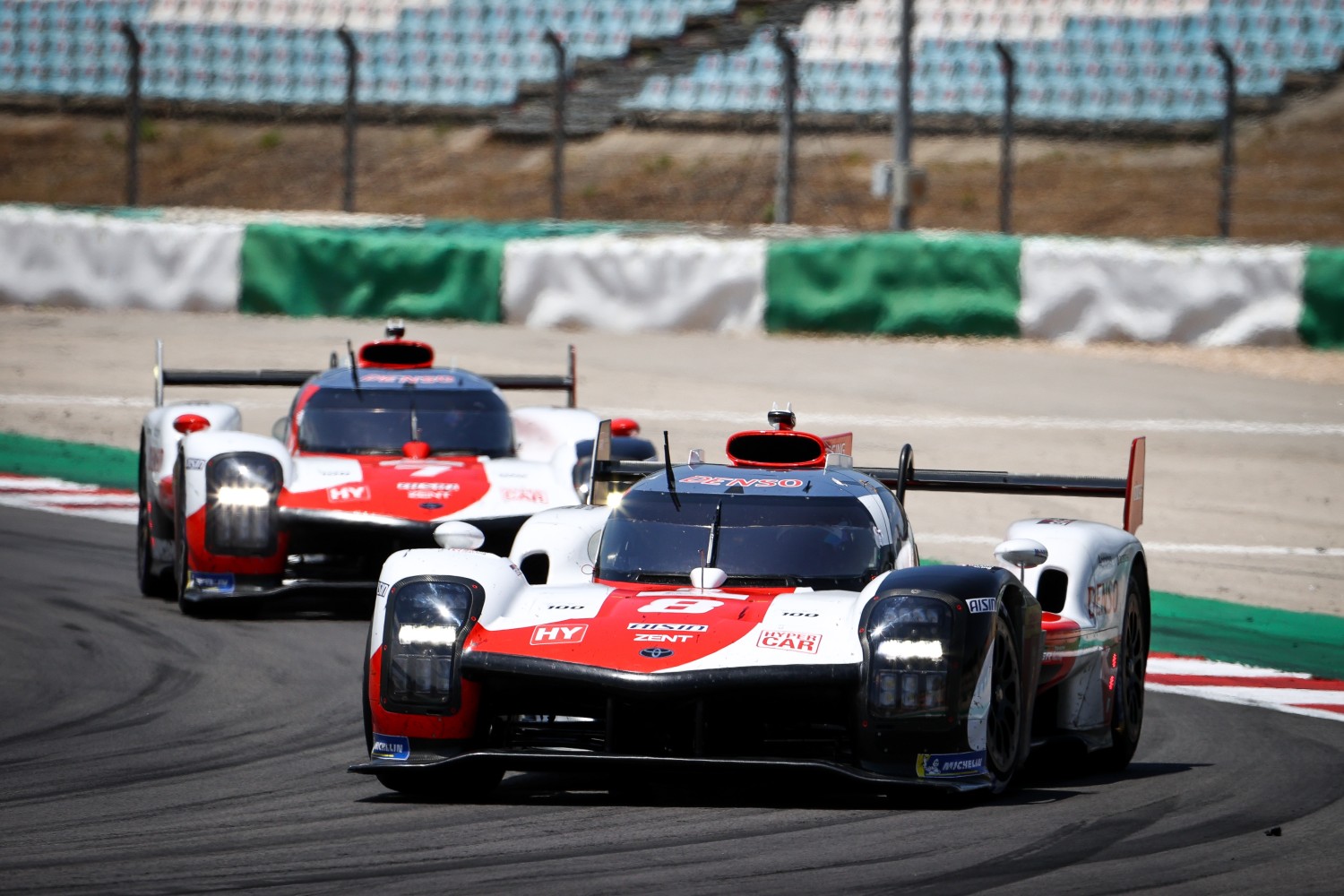 TOYOTA GAZOO Racing celebrated its 100th World Championship sportscar race with a one-two victory for its new GR010 HYBRID Hypercar in the 8 Hours of Portimao following a flawless performance in Portugal.

After missing pole position on Saturday, the team responded in style to win the second round of the 2021 FIA World Endurance Championship (WEC) and earn its 32nd victory from 100 races in the series.

Sébastien Buemi, Kazuki Nakajima and Brendon Hartley, in the #8 GR010 HYBRID, won a race-long battle with their team-mates to take victory by 1.8secs from World Champions Mike Conway, Kamui Kobayashi and José María López in the #7 sister car.

With a second win from two races in 2021, following victory in the season-opening 6 Hours of Spa-Francorchamps, TOYOTA GAZOO Racing has extended its teams’ World Championship lead to 22 points. In the drivers’ standings, the #8 crew hold a 20-point advantage over #7 with four races remaining.

Following an exciting Hypercar battle at Spa last month, WEC’s first visit to Portugal witnessed another close battle. Every second counted from the moment Sébastien took the start behind the pole position Alpine with José in third.

Only 10 seconds separated the top three at the first fuel stops. Sébastien then briefly lead when the #36 stopped earlier. The Alpine requires additional pit stops over the eight hours due to a smaller fuel tank, but consequently benefits from a lighter fuel load and shorter stops.

When Mike and Brendon took over their respective cars at the first driver changes, shortly before the two-hour mark, an incredibly close race developed at the front. Only 10 seconds separated the top three, led by the Alpine from the #7 and #8 GR010 HYBRIDs, after 75 laps.

Early in his stint, Brendon was delayed badly behind an LMP2 car, just as Sébastien had been earlier, and this cost the #8 car second place. Mike was able to pass but during the next fuel stops, Brendon reclaimed the advantage by pitting a lap earlier. Then he again lost out to Mike due to heavy traffic.

As half distance approached, Kamui and Kazuki took over driving duties with a full pit stop advantage over the Alpine. That meant Kamui lead by 10secs from Kazuki.

The team therefore appeared to have the race under control until an LMP2 car got stuck in the gravel with just under three hours remaining. As a consequence the safety car closed up the field and brought the Alpine back into contention.

When racing resumed with two-and-a-half hours remaining, the Alpine soon took second from Kazuki and pressured leader Kamui before pitting. The GR010 HYBRIDs responded and rebuilt their advantage. The #7, in Jose’s hands, emerged as the leader ahead of Sébastien, who was saving fuel.

A full course yellow slowed the race with 30 minutes to go and José brought the #7 in for a short fuel stop. He returned to the track just three seconds behind Sébastien in the #8, setting up a tense finish. When José closed up to the #8 car, team policy allowed him the opportunity to take the lead and pull away. However, Sébastien was able to stay directly behind so José was asked to reverse the order as per protocol.

Alpine Elf Matmut, who started today’s race in pole position, placed third after taking the fight to Toyota and leading large sections of the race. It marks Nicolas Lapierre, Matthieu Vaxiviere and Andre Negrao’s second consecutive podium for the French outfit. The team are 22 points adrift of Toyota in the team standings.

Ryan Briscoe was next to take over at the wheel of the Glickenhaus 007 Hypercar but was involved in three car incident alongside two LMGTE Am cars after two hours, forcing the car into the pit for repairs. Romain Dumas re-joined the race but the car was shortly back in the pits to fix a slipping clutch. The team successfully got the car back on the track so the brand-new Hypercar could continue to gather data ahead of the next event at Monza.

The FIA WEC will now take a short four-week break before the championship resumes for round three at Monza, Italy, next month.

Ferrari claimed a clear 1-2 finish in the LMGTE Pro category at the 8 Hours of Portimão to take the lead of the World Endurance GTE Manufacturers’ Championship from Porsche.

The No. 51 AF Corse Ferrari pairing of James Calado and Alessandro Pier Guidi led the majority of the race after Calado hunted down the pole-sitting No. 92 Porsche driven by Neel Jani in the second hour.

It meant that Ferrari took a conclusive win to bring birthday cheer for James Calado, who celebrated his 32nd birthday in the best manner possible – with champagne on the podium.

The victory though was hard-fought as the AF Corse Ferrari team had to contend with blistering on the Ferrari 488 GTE EVO’s tires throughout the race as temperatures at the Algarve International Circuit soared.

However, both Calado and Pier Guidi were able to manage the challenges expertly and despite some final hour fuel-saving they were able to claim the bumper 38 points and vault Kevin Estre and Neel Jani in to the lead of the points standings.

Ferrari’s successful day was rounded off when the No.52 car driven by Miguel Molina and Daniel Serra also hunted down the No.92 Porsche in the fourth hour and followed its sister car home for a deserved 1-2.

This was settled in the final hour when the Ferrari was able to complete its final stop under a full-course yellow period which finally repelled the No.92 Porsche in its efforts to fight them off.

Porsche placed third and fourth as, like Porsche it struggled with some tire blistering in the early and middle stages of the race.

This meant it was powerless to defend from the attacking Ferraris and ensured that Kevin Estre, Neel Jani and Michael Christensen had to settle for third position. The other Porsche 911 RSR-19 of Gianmaria Bruni, Richard Lietz and Frederic Makowiecki completed the order in fourth place.

There was a double celebration for Ferrari as the Cetilar Racing squad took a popular first class win in the FIA WEC with its distinctive blue 488 GTE Evo machine.

Roberto Lacorte, Giorgio Sernagiotto and Antonio Fuoco powered to victory to become the first ever all-Italian trio to win in GTE Am with a Ferrari.

It was a fierce battle throughout the duration of the race with multiple leaders at varying stages but it ultimately came down to a straight fight between the Cetilar Ferrari and the No. 56 Team Project 1 Porsche of Riccardo Pera, Egidio Perfetti and Matteo Cairoli.

After excellent stints by both team owner Lacorte and Sernagiotto, it was left to Fuoco to fight wheel-to-wheel with both Cairoli and then Pera in the final exchanges.

The Porsche at one stage appeared to have the win in the bag but a late race penalty for an incident with the Real Racing Team LMP2 car was applied and meant Cetilar were able to win by just 5.8 seconds.

Completing the LMGTE Am podium was the No.54 AF Corse Ferrari driven by Francesco Castellacci, Thomas Flohr and Giancarlo Fisichella. They claimed their best result since the 8 Hours of Sebring in Match 2019.

The LMP2 category saw an epic battle as there were a number of lead changes throughout today’s 8-hour race, which was held in warm and sunny conditions.

However, it was JOTA who took a memorable 1-2 result as the No. 38 Oreca-Gibson belonging to Antonio Felix da Costa, Anthony Davidson and Roberto Gonzalez made a well-calculated overtake on the team’s sister car in order to move into the top spot, just minutes from the checkered flag.

Tom Blomqvist, Stoffel Vandoorne and Sean Gelael finished second after epic fightback in race to the line, with the trio eventually finishing just three seconds adrift of their team-mate’s car. Blomqvist, who was spun around on the first lap, looked like he would keep da Costa at bay in final stages but local hero made a sensational move to edge ahead when it mattered most.

Pole-sitters United Autosports USA looked competitive throughout today’s race but the reigning LMP2 Champions’ advantage dissipated early on following a safety car development. Paul Di Resta, Wayne Boyd and Phil Hanson all put in sensational stints but lost out on a top two position as different tire strategies played out. The Anglo-American team eventually finished third and it marks the 200th podium for the squad.

Fourth place was awarded to Team WRT who had a drama-filled race, which saw the team fight back after taking two penalties – one for pitlane speeding and a later one for a blue flag infringement. All three drivers – Charles Milesi, Ferdinand Habsburg, Robin Frijns – put in stellar stints but the time lost from the penalties proved too much to be able to fight for a podium spot.

Fifth in category was Polish-flagged squad Inter Europol Competition with its drivers Alex Brundle, Kuba Smiechowski and Louis Delétraz. It was the team’s second fifth place finish in a row. In the first two hours of the race, the car ran as high as second but due to tire problems in Delétraz’s second stint, the team were forced to settle for fifth.

After a solid race, the Richard Mille Racing Team trio belonging to its all-female line-up of Tatiana Calderon, Sophia Floersch and Beitske Visser took a credible sixth place – one spot ahead of RealTeam Racing who finished seventh.

Elsewhere, Racing Team Nederland were leading in the early stages of the race but contact for Job van Uitert alongside the Ferrari of Alessandro Pier Guidi caused rear-left suspension damage, leading to a lengthy stint in the pits. The team eventually finished eight.

In the LMP2 teams’ standings, it’s JOTA who now lead the standings as the No. 38 JOTA car lies seven points ahead of the No. 22 United Autosports USA crew. The No. 28 JOTA crew is third with a total of 43 points.