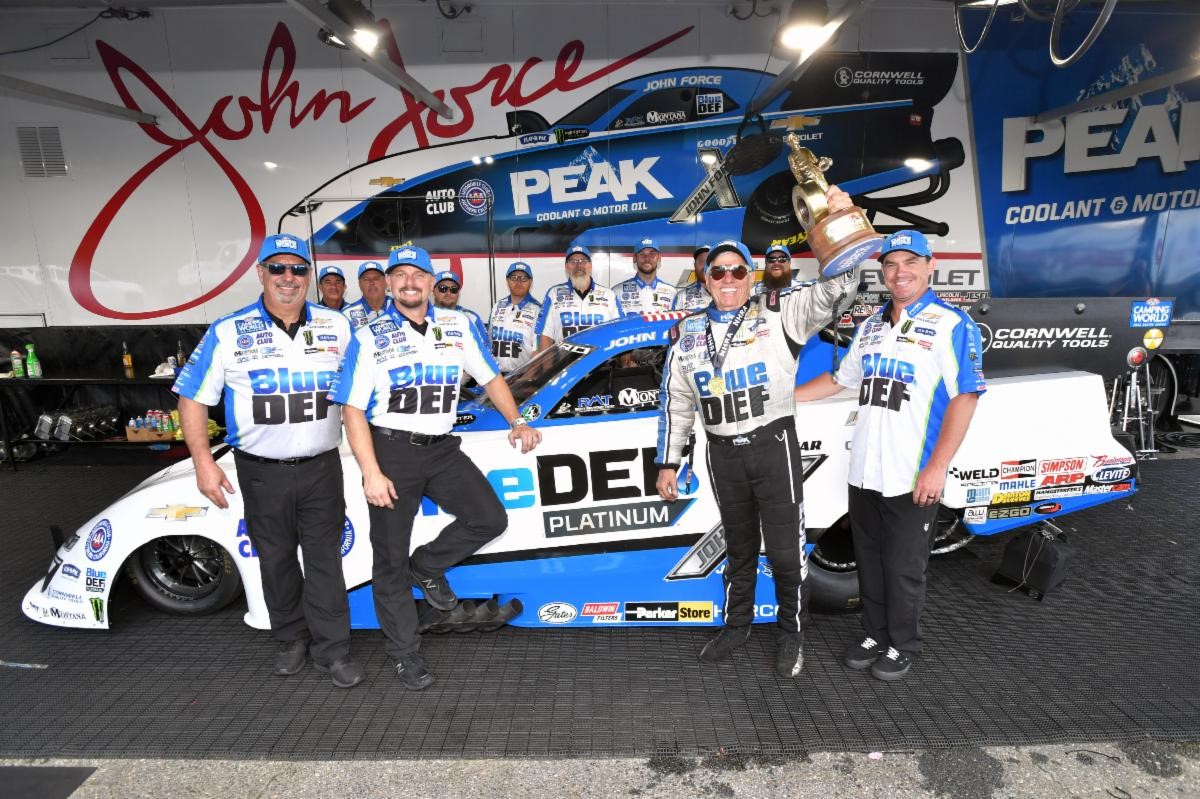 For the seventh time in their careers, John Force and Robert Hight met in the final round. Force and the PEAK / BlueDEF PLATINUM Chevrolet Camaro SS Funny Car are now 4-3 against Hight and the AAA New England Camaro as they picked up their second win of the season, 153rd of Force’s career at the TascaParts.com NHRA New England Nationals at New England Dragway. Brittany Force and the Flav-R-Pac dragster team made an early exit in the first round but remain in the top five in points.

Lined up against team president and three-time world champion Robert Hight in the final round, Force would maintain his consistency running 3.972-seconds at 327.51 mph to defeat the AAA New England Chevy’s 3.993 at 323.35 marking Force’s 26th season where he has won two or more NHRA national events.

“This win represents team effort. You have to look at both of these cars and Brittany’s dragster, they all have PEAK on them and AAA and Monster, Flav-R-Pac, Chevy and all the people that take care of me, that’s what it’s all about,” said Force, who is now second in points, only 15 out of first. “Robert helps me so much trying to help me back in the driver’s seat where I don’t suck so bad and, right now, I’ve got a car and I won today, and I did my job. I want to thank all the people in Epping for coming back and I want to thank Daniel Hood for a great tune-up, and Tim Fabrisi for fixing the cockpit in my car.”

Entering the day in the No. 10 qualifying spot, it was a pedalfest for Robert Hight and the AAA New England Chevy boys as they picked up the first-round victory over Alexis DeJoria. Hight handled the AAA hot rod to a 4.336-second pass at 287.78 mph defeating DeJoria’s 4.717. In the second round, Hight matched up with longtime rival and New England favorite Bob Tasca III. Tasca lost traction at the start for Hight to drive away with a 3.972-second run at 324.36 mph.

“Really wanted this one for AAA New England. We all really wanted it. This crew, Jimmy Prock and Chris Cunningham, they worked hard. We went some rounds and got better but not the result we wanted,” said Hight who is fourth in points. “You always want to be the ones winning but I’m glad it stayed in the John Force Racing family. John’s been working hard too; all of our teams have been and we’re dominating and that’s ultimately what you want. Next weekend in Norwalk, it’ll be us.”

Brittany Force and the Flav-R-Pac team had a side-by-side race against Antron Brown in the first round but came up short when they dropped a cylinder to run 3.843-seconds at 319.mph that was bettered by Browns 3.773 at 324.98.

“We ran a 3.843 pass with a cylinder out and got beat first round here at New England Dragway,” Force said. “This Flav-R-Pac Monster Energy team has had a tough couple of races lately so we’re hoping to turn our luck around at the next one in Norwalk, Ohio.”