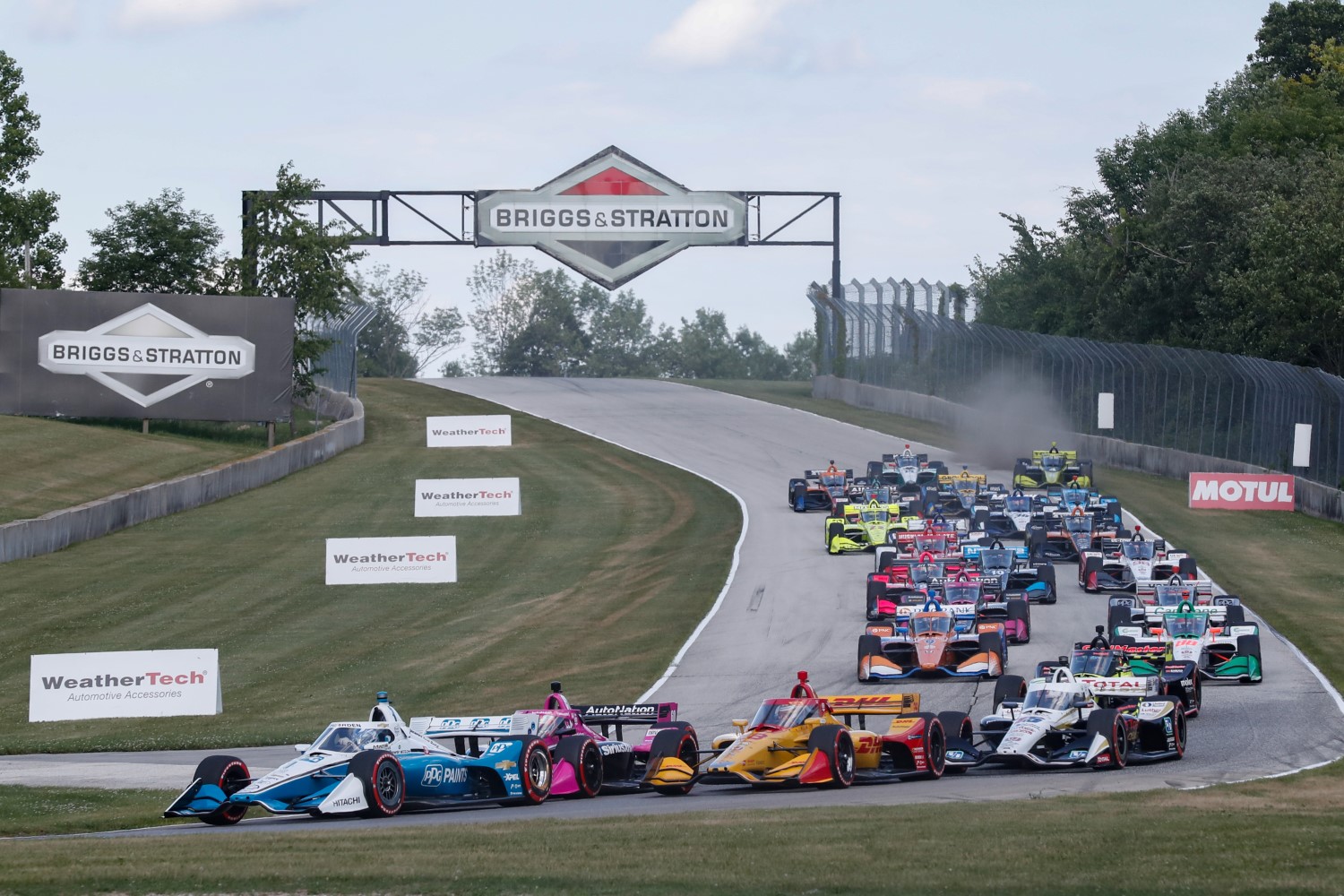 There is a new championship leader and new challenges ahead as the NTT INDYCAR SERIES begins the second half of this competitive season.

Pato O’Ward’s victory in the second race of last weekend’s Chevrolet Dual in Detroit pushed the Arrow McLaren SP driver into the series lead heading to the REV Group Grand Prix presented by AMR on Sunday, June 20 at the Road America circuit in Elkhart Lake, Wisconsin. O’Ward is one point ahead of Chip Ganassi Racing’s Alex Palou with eight races remaining. Practice begins at 5 p.m. (ET) Friday (live on Peacock).

However, the initial focus of the Road America weekend centers on two injured drivers and their replacements.

Ed Carpenter Racing’s Rinus VeeKay will not be medically cleared for this event following Tuesday’s surgery to repair a broken left clavicle injured in a cycling accident Monday. VeeKay, fifth in the season standings, is being replaced in the No. 21 Direct Supply Chevrolet by 2019 Indy Lights champion Oliver Askew, who replaced Arrow McLaren SP’s Felix Rosenqvist in the second Detroit race after the Swede was hospitalized in a crash in Race 1. As Rosenqvist is still not ready to return to the No. 7 Arrow McLaren SP Chevrolet, he will be replaced by Kevin Magnussen, a veteran of seven Formula One seasons who won last weekend’s IMSA WeatherTech SportsCar Championship race at Detroit’s Belle Isle circuit.

VeeKay is the second ECR driver in six years to suffer such an injury. In 2016, Josef Newgarden broke his clavicle in a crash with Conor Daly at Texas Motor Speedway. Newgarden returned to the car 12 days later at INDYCAR’s next event — ironically, it was at Road America. If VeeKay follows a similar recovery timeline and can manage the pain, he could be back for the Honda Indy 200 at the Mid-Ohio Sports Car Course (July 2-4).

VeeKay is one of seven INDYCAR drivers to win a race this season. He captured his maiden series victory in the GMR Grand Prix on May 15 at the Indianapolis Motor Speedway road course.

Magnussen, 28, started 119 F1 races for the McLaren, Renault and Haas teams from 2014-20. His best finish came in his first race – second place in the Australian Grand Prix for McLaren. He spent four years as a Haas F1 teammate of INDYCAR rookie Romain Grosjean, who now drives the No. 51 Nurtec ODT Honda of Dale Coyne Racing with RWR.

This weekend’s field stays at 25 car-and-driver combinations as NASCAR Cup Series and sports car driver Cody Ware makes his series debut in the No. 52 NURTEC ODT Honda of Dale Coyne Racing with RWR. Ware completed his first INDYCAR laps earlier this year in a test at Sebring International Raceway and recently participated in a rookie test day at Road America.

In addition to the INDYCAR SERIES, the REV Group Grand Prix weekend includes all three levels of the Road to Indy program.

Sunday’s 55-lap INDYCAR race opens with the television broadcast at noon (ET) on NBC Sports Network. The INDYCAR Radio Network will have all the action on INDYCAR.com, the INDYCAR Mobile App powered by NTT DATA and SiriusXM 205.

O’Ward became the first INDYCAR driver to win multiple races this season, ending a run of seven different winners to start the year. The way O’Ward muscled past four other standout competitors in the final seven laps of Sunday’s race illustrates the strength his No. 5 Arrow McLaren SP Chevrolet should have in the second half of the season. He also snared a third-place finish the weekend’s first race, one of six top-four finishes in eight races this season.

A return to Road America should push O’Ward’s confidence to yet another level. He won his initial NTT P1 Award for last year’s second race at the picturesque 14-turn, 4.014-mile circuit, then finished second to Rosenqvist – then driving for Chip Ganassi Racing – in the race. That effectively was O’Ward’s breakout moment in INDYCAR, and he has seven top-three finishes since then. He has a pair of poles this season and has won two of the past five races.

O’Ward was not surprised to learn he had taken the series points lead when asked about it just after driving away from the field late in Sunday’s Detroit race.

“Yes, I can (believe it),” he said firmly. “The (crew has) been doing a great job. They deserve this. There’s still so much to go; we just need to stay on it and continue pushing.”

Like O’Ward, Palou (No. 10 NTT DATA Honda) is in his second full INDYCAR season and is in the championship fight for the first time. Palou won the season-opening Honda Indy Grand Prix of Alabama at Barber Motorsports Park on April 18 and has remained in the top three of the standings since. He finished 15th and third, respectively, in the Detroit races. He earned his first career podium in Race 1 at Road America last year.

How will Kevin Magnussen do?

He never tested or race an IndyCar.  Yet former F1 driver Kevin Magnussen is being thrown directly into the fire subbing the last minute for an injured Felix Rosenqvist – on loan from Chip Ganassi Racing where he is driving in IMSA this year.

He has been wanting to get into IndyCar and now he gets his first break, even though it is last minute.

Magnussen said it will be a “big challenge to go straight into a race having never driven an IndyCar before”.

“But I couldn’t say no to the opportunity,” he added.

Road America stands out as a track where INDYCAR champions reign.

The circuit in central Wisconsin, which opened in 1955, has hosted 31 races for U.S. open-wheel racing’s top division, and 25 times the winner was either a champion at the time or soon would be. That included a streak of 13 consecutive years from 1986-1998.

There are a handful of conspicuous absentees on the 2021 win list who all could contend for victory Sunday at Road America. The Team Penske trio of past season champions – Josef Newgarden, Simon Pagenaud and Will Power – each are looking for their first victories. So is the Indy 500-winning duo from Andretti Autosport – Ryan Hunter-Reay and Alexander Rossi. The Rahal Letterman Lanigan Racing duo of Graham Rahal and two-time Indy 500 winner Takuma Sato also are still looking to enter Victory Lane for the first time this season.

An impressive variety of winners is a trend that started at the end of the 2020 season. Stretching back into last year, there have been nine different winners in the last 10 NTT INDYCAR SERIES races, adding Power (Harvest GP-2) and Newgarden (St. Petersburg) from last October.

INDYCAR returns to its regular three-round knockout qualifying session, which will air live on Peacock, NBC’s streaming service, at 2:30 p.m. (ET) Saturday. NBCSN will televise the replay at midnight.

Unlike in Detroit, there will be two 45-minute practices, at 5 p.m. (ET) Friday and 11:10 a.m. (ET) Saturday. A final 30-minute practice, which serves as the race warmup, will be held after qualifying Saturday at 5:30 p.m. (ET). All practice sessions can be viewed on Peacock.

Indy Lights, Indy Pro 2000 and USF2000 will have two races each, the first on Saturday and a second on Sunday.

The rest of the season

O’Ward and Palou are separated by a single point with Dixon, a six-time series champion, 36 points out of the lead in third. Newgarden is fourth in the standings, 51 points behind O’Ward. VeeKay and Pagenaud (No. 22 Menards Team Penske Chevrolet) both are five points behind Newgarden.

Sunday’s race at Road America is the first of four permanent road course events to end the season. There are two temporary street races remaining with a short oval remaining. The schedule:

Firestone tire allotment: Seven sets primary, four sets alternate for use during the race weekend. One additional set of primary tires may be used by teams fielding a rookie driver. Teams must use one set of primary and one set of new (sticker) alternate tires for at least two laps in the race.

INDYCAR Radio Network broadcasts: Mark Jaynes is the chief announcer alongside analysts Davey Hamilton and Nick Yeoman. Jake Query and Michael Young are the turn announcers with Ryan Myrehn and Joel Sebastianelli in the pit lane. The REV Group Grand Prix will air live on network affiliates, SiriusXM 205, indycar.com and the INDYCAR Mobile app powered by NTT DATA. All NTT INDYCAR SERIES practices and qualifying are available on SiriusXM 205, indycar.com and the INDYCAR Mobile app.