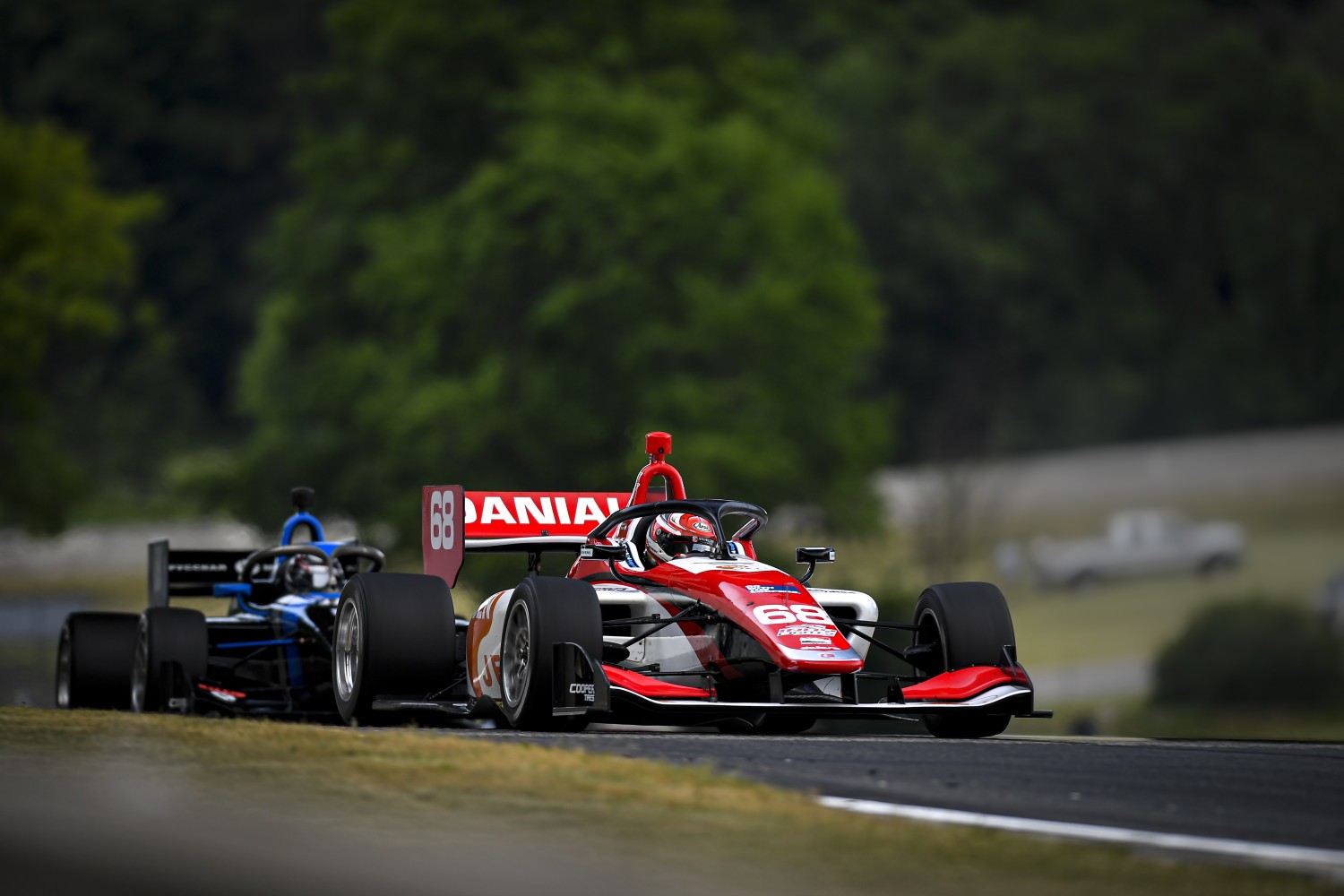 A busy day of practice and qualifying at Road America for the three Road to Indy Presented by Cooper Tires open-wheel driver development series saw pole positions decided for four of the six races which will be held this weekend as part of the REV Group Grand Prix NTT INDYCAR SERIES event.

Two separate qualifying sessions for the intensely competitive Cooper Tires USF2000 Championship saw Brazilian Kiko Porto narrowly top a 25-car field on both occasions to claim pole for both of the weekend’s races for DEForce Racing.

Frost is Hot in Indy Lights

Danial Frost clearly enjoys driving at Road America. Two years after making his Road to Indy debut at the scenic Wisconsin road course in USF2000 in 2018, Frost claimed victory in the opening race of the 2020 Indy Pro 2000 season. This afternoon, Frost, 19, driving for Andretti Autosport, added his first career Indy Lights pole with a best lap of 1:55.5938, an average speed of 125.010 mph.

“I’m really happy, I didn’t expect this,” said Frost, who was eighth fastest in practice this morning and whose previous best qualifying effort came on the streets of St. Petersburg, Fla., where he started fourth. “I pushed a bit harder and was able to get the lap in, but it’s surprising how large the gap is to the rest of the field. We only had two laps to get it in and the team did a great job on strategy. It means a lot; we’ve been working hard to get to the top step and we’re one step away from that first victory. We’ve had good results here in the past and it’s a track I really enjoy. I’ve had a lot of momentum and confidence here, especially with the win last year, so that plays a part – but we’ve worked hard to extract the most out of myself and the car and it paid off. I can’t thank the team enough. I’m just going to go hard at the start and focus on my own race tomorrow.”

David Malukas, from Chicago, Ill., has a stellar record at this home circuit, scoring his first Road to Indy pole position in USF2000 in 2017 and his first Indy Pro 2000 victory in 2018, but he had to be content with second on the grid today for HMD Motorsports. Malukas currently trails Swedish stablemate Linus Lundqvist (Global Racing Group with HMD Motorsports) by a solitary point after eight races.

Italian-Canadian Devlin DeFrancesco also netted a career-best third on the grid for Andretti Steinbrenner Autosport, narrowly ahead of Andretti Autosport teammate Kyle Kirkwood, from Jupiter, Fla., who swept both races last weekend at The Raceway on Belle Isle Park in Detroit, Mich.

Lundqvist, the points leader, has to be content with the fifth starting position for tomorrow’s opening race – the Cooper Tires Indy Lights Grand Prix of Road America Powered by AER – which will go green at 3:05 p.m. CDT.

Coverage can be found on Peacock Premium in the U.S., on REV TV in Canada, and internationally on The Race YouTube channel, the Road to Indy TV App and at RoadToIndy.TV and indylights.com.

Sulaiman Back on Top in Indy Pro 2000

The fastest nine Indy Pro 2000 drivers were separated by a fraction over half-a-second at the conclusion of a tense 20-minute qualifying session around the challenging 4.014-mile, 14-turn circuit, with Manuel Sulaiman topping the charts at 2:04.5286, an average speed of 116.045 mph. Sulaiman’s performance netted Juncos Racing’s fifth consecutive pole position after teammate Reece Gold, from Miami, Fla., had claimed the honors in each of the most recent four races.

Today’s pole was the fourth in Indy Pro 2000 for Sulaiman, now taking part in his second full season at this level, but his first of the 2021 season. Sulaiman also started on pole for one of the two Indy Pro 2000 races last year at Road America.

“It’s good to see the team at the front of the field again,” said Sulaiman. “We worked hard for this and I hope to continue with this momentum. It’s taken some time for everything to come together, but the team and I work well together and they deserve this. This track is a bit abrasive, which means the tires come in quickly, so you really only have one chance to get that perfect lap. We’ll keep pushing, work hard to finish the job and get the win tomorrow. We need to have a good start and have a clean race.”

Russian Artem Petrov (Exclusive Autosport), who last year claimed his first Indy Pro 2000 victory at Road America, will share the front of the grid with Sulaiman.

Jacob Abel, from Louisville, Ky., posted his best qualifying performance to date for his family-owned Abel Motorsports team and will be joined on row two of the grid by Gold, who is still seeking his first victory of the season.

Jack William Miller, from Carmel, Ind., also netted a career-best grid position since stepping up to Indy Pro 2000 with Miller Vinatieri Motorsports. The top four cars were separated by just 0.1380 of a second.

The green flag for the first of two races which comprise the Cooper Tires Indy Pro 2000 Grand Prix of Road America Powered by Elite Engines will fly at 12:10 p.m. CDT tomorrow. Global live streaming can be found on the Road to Indy TV App and at RoadToIndy.TV and indypro2000.com.

Kiko Porto, from Recife, Brazil, entered the weekend second in the USF2000 points table, seven points out of the lead, although today he added two more points to his tally as a result of posting the fastest time in both 20-minute qualifying sessions for DEForce Racing.

“I can’t describe this moment, to get two poles in a weekend is just perfect,” said Porto. “This is my first weekend at Road America and I love this track! It’s so fast and a very long track, but I was P1 in the first test yesterday so I have gotten very comfortable. The team did a great job, we were able to compare the data from last year and they gave me a great car – and my teammates as well. We are 1-2-3 for the second race. We just have to keep pushing. The championship is so close and we need to focus on that. This is a hard track to race on since the straights are so long and there’s a lot of drafting, so it’s hard to open a gap. I’m not sure about my strategy yet, but I have a good car and good teammates near me, so I think we have a good chance to win. They are very fast and experienced, and I’m comfortable racing hard with them so it will be fun.”

Remarkably, given how close the times were in practice this morning when the top six drivers representing three different teams all recorded times within one tenth of a second, DEForce Racing secured the top two starting positions for the first of two races and then went one better by sweeping the top three in qualifying for Race Two. Nolan Siegel, 15, from Palo Alto, Calif., was second fastest in qualifying for both races, while Prescott Campbell, from Newport Beach, Calif., annexed the third position for Race Two.

Cape Motorsports’ Michael d’Orlando, from Hartsdale, N.Y., was “best of the rest” in both sessions, taking third on the grid for the first race and fourth for Race Two.

Sundaramoorthy’s teammate Josh Pierson, from Wilsonville, Ore., improved from seventh in the first session to fifth in the second, ahead of Josh Green (Turn 3 Motorsport), from Mount Kisco, N.Y., and top rookie Thomas Nepveu (Cape Motorsports), from Oka, Que., Canada. Kohlbecker and Sundaramoorthy were eighth and ninth fastest for Race Two.

The first leg of the Cooper Tires USF2000 Grand Prix of Road America Powered by Elite Engines will start at 11:15 a.m. CDT tomorrow. Global live streaming can be found on the Road to Indy TV App and at RoadToIndy.TV and usf2000.com.