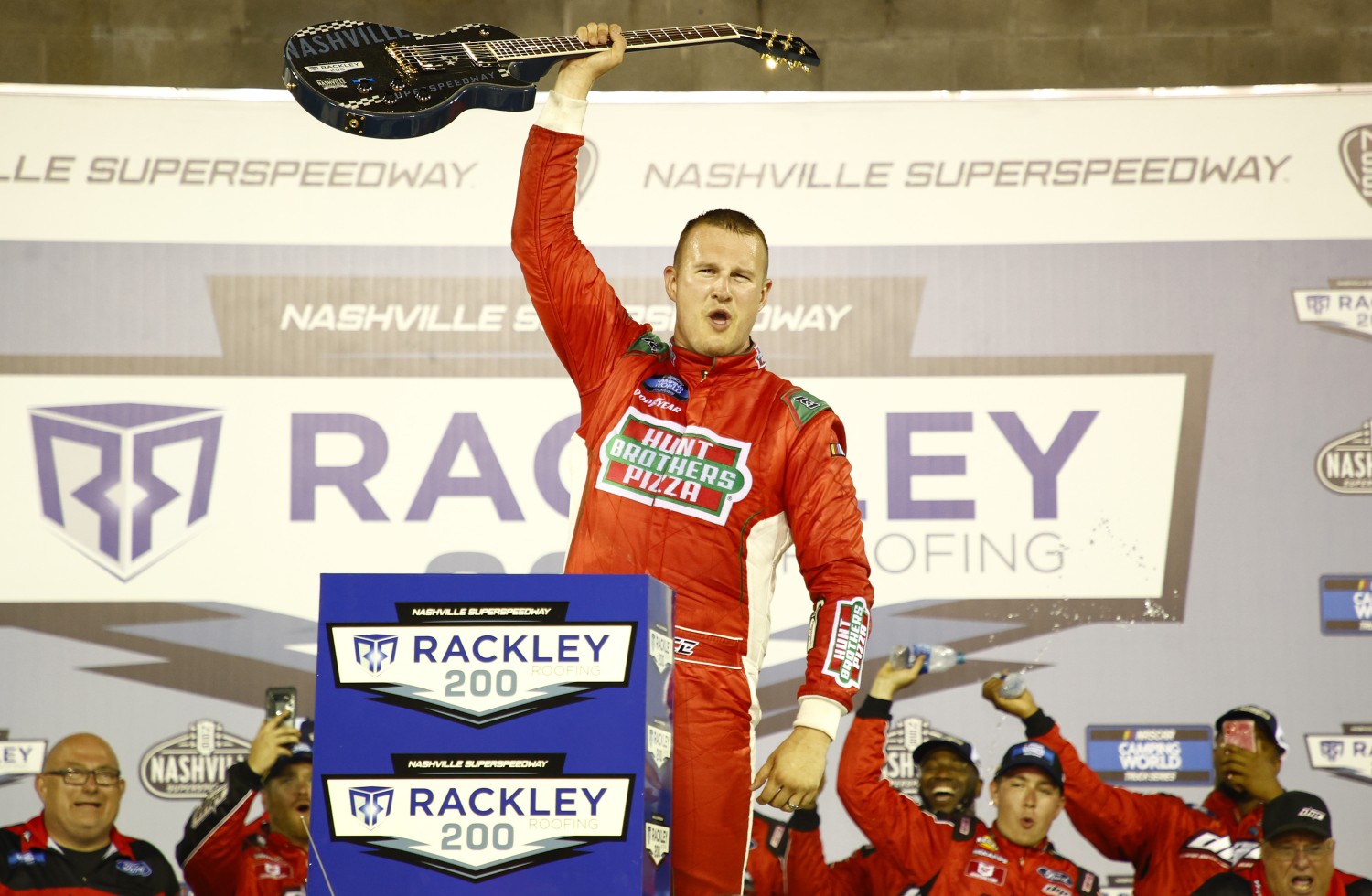 Ryan Preece took the lead from Grant Enfinger with seven laps remaining in the Rockley Roofing 200 at Nashville Superspeedway to earn his first NASCAR Camping World Truck Series victory Friday night in his first race in the series.

Preece, the 30-year old Connecticut native who competes full-time in the NASCAR Cup Series, is only the fifth driver in history to win in his truck series debut.

Preece, driving the No. 17 Ford for Team DGR, outdueled David’s son Todd and Grant Enfinger in the final laps to earn the win.

“This truck was awesome,” said Preece, who led eight laps, including the final seven. “I know I was aggressive and pulled some big blocks. Just super proud of this opportunity. You don’t get them very often so you have to take advantage of it.”

“I was just taking the guidance from [crew chief] Chad [Johnston] and my teammates and told them I’d be better in the race than I was in qualifying and practice. And fortunately, I lived up to that.”

Preece’s teammate Todd Gilliland – who started at the rear of the field following a pre-race inspection violation – rallied all the way to second place, passing Enfinger with four laps remaining.

“It stings not to get that last spot especially because I was under the 17 [Preece] and got too loose, but that’s racing,” said Gilliland, whose father David served as his crew chief after his normal crew chief was suspended as part of the inspection penalty.

The Preece-Gilliland work gave Ford its first one-two finish of the season. Enfinger finished third followed by Zane Smith and Stewart Friesen, whose top-5 finish was only his second top 10 in the past eight races of the season.

Preece, who drives the No. 37 JTG-Daugherty Chevrolet in the NASCAR Cup Series, was one of three full-time Cup Series drivers entered Friday – all wanting to get some extra laps at the 1.333-mile Nashville track which is hosting its first Cup race Sunday. Chip Ganassi Racing’s Ross Chastain finished 22nd and Hendrick Motorsports’ William Byron finished last in the 36-truck field, his No. 27 Chevrolet truck experiencing a motor problem shortly after the Stage 1 break.

A slow pit stop during that stage break forced him to play catch-up, but he rallied back inside the top 10. His race ended early after contact with the Josh Berry truck sent Kraus’ No. 19 Toyota hard into the wall with only 40 laps remaining.

Nemechek’s 10th-place finish retained the lead in the championship standings for the second-generation driver. A four-race winner so far in 2021, he leads Rhodes by 78 points with only three races remaining to set the 10-driver Playoff field.