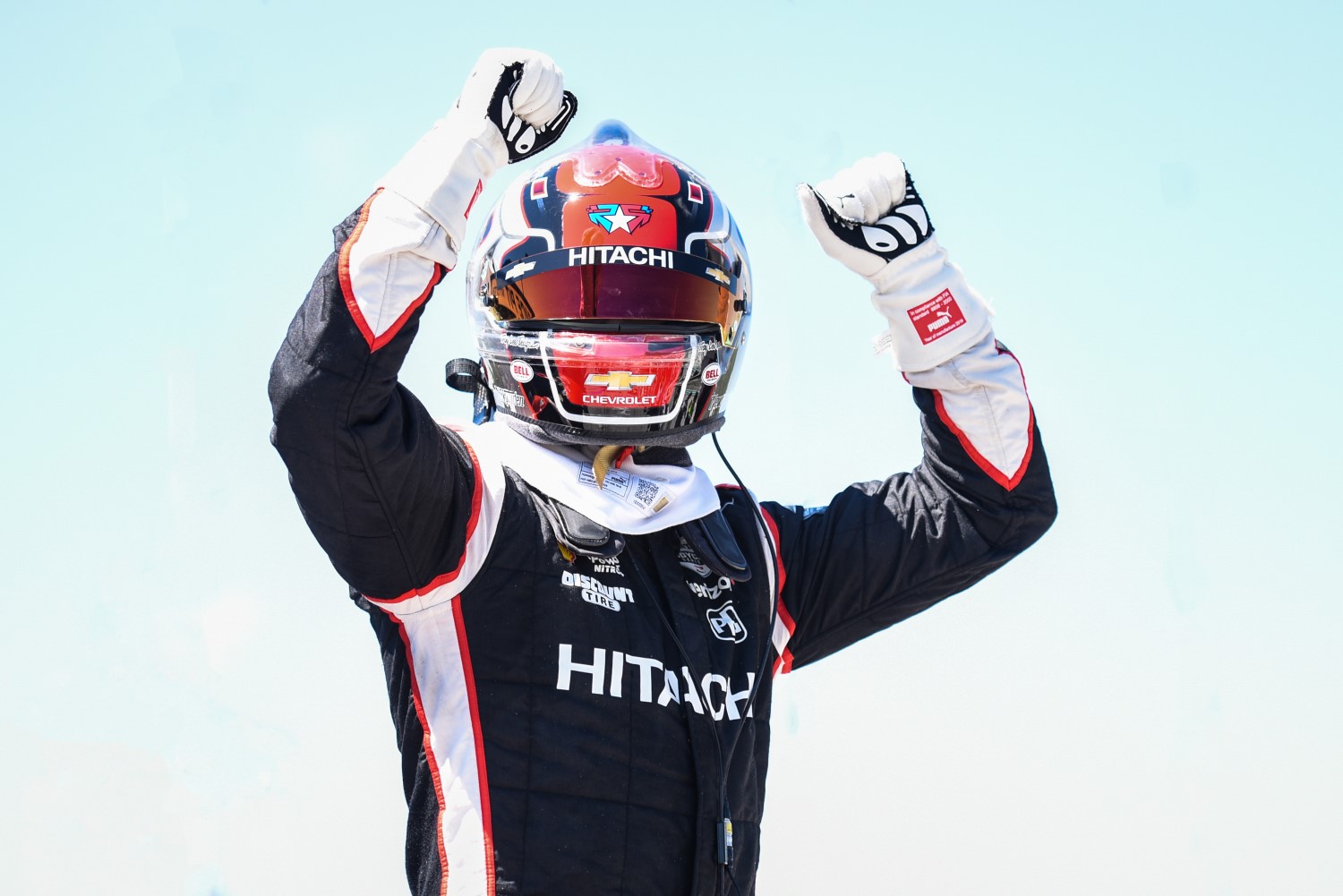 Josef Newgarden  edged out Colton Herta and Jack Harvey to win pole position for tomorrow’s REV Group Grand Prix at Road America. It was the 13th career pole for the driver of the No. 2 Hitachi Team Penske Chevrolet, who also captured pole for the second race of the doubleheader last week in Detroit.

Interestingly, Newgarden managed to win pole without putting on a set of Firestone Red tires in the Firestone Fast Six session.

Newgarden was the only driver in the Firestone Fast Six who elected to use new Firestone primary “black” tires for the entire final round of qualifying instead of used primary tires or the grippier, but less durable Firestone alternate “red” tires. That paid off with a best lap of 1 minute, 46.0186 seconds in the No. 2 Hitachi Team Penske Chevrolet on the 14-turn, 4.014-mile course.

“We knew this morning this was what we were going to do,” Newgarden said. “I didn’t know where everyone else was at, but this was my plan in the morning. Everybody was on board with it. Just happy to see it work out. I’m a little surprised more didn’t do that. You need to mix it up. It was going to be hard to make used tires work.”

It was the second pole of the season and second straight for Newgarden, who finished second in Race 2 of the Chevrolet Dual in Detroit last Sunday after winning the NTT P1 Award. Newgarden, from Nashville, Tennessee, earned his 13th career NTT INDYCAR SERIES pole after leading the morning practice and learning an important lesson for the three-round qualifying session.

“We knew this morning this was what we were going to do,” Newgarden said. “I didn’t know where everyone else was at, but this was my plan in the morning. Everybody was on board with it. Just happy to see it work out. I’m a little surprised more didn’t do that. You need to mix it up. It was going to be hard to make used tires work.”

Will Power was fourth with Alex Palou and Simon Pagenaud completing the top-6. Qualifying session results below.

O’Ward will need to charge from almost midway through the field if he wants to earn his third victory this season in the No. 5 Arrow McLaren SP Chevrolet. O’Ward was eliminated after the second round of qualifying and will start 10th after a best lap of 1.46.1069.

“We just haven’t found the right balance since practice one,” O’Ward said. “We were OK with the cooler temperatures this morning, but any time it gets a little bit warmer, we’re not in the window.”

Another title contender, six-time and reigning series champion Scott Dixon, will need to work even harder than O’Ward to race to the front Sunday. Dixon will start 13th in the No. 9 PNC Bank Grow Up Great Honda after he was eliminated in the first round of qualifying. Dixon is third in the championship, 36 points behind O’Ward.

Dixon lost about 15 minutes of track time in the morning practice due to repairs of his chassis undertray in the pits after he ran over debris in the fast, sweeping Carousel corner.

“It’s frustrating with how compact these weekends are, and if you lose any kind of sequence of it, the roll-on effect is pretty big,” Dixon said. “It is what it is; you can’t do anything about it. It was something on the track, something I couldn’t avoid in a corner that I couldn’t really avoid.”

Dale Coyne Racing with RWR driver Romain Grosjean made it into the Fast 12 for the fifth time this season during qualifying for tomorrow’s REV Group Grand Prix presented by AMR and placed himself seventh on the starting grid, missing out on the Firestone Fast 6 by half a tenth of a second.

AR1.com spoke with Kevin Magnussen, driving the Arrow McLaren SP #7 entry for the injured Felix Rosenqvist, after the former F1 driver had the first qualifying session for IndyCar completed.   Magnussen maintained a smile after a not so successful Q1 session.

“I was not completely happy with my qualifying.  I think I tried to take a massive step in one step to the front drivers, and instead I ended up taking two back.  I should have probably been more patient.  And taken another step.”

“It was difficult because we chose to go out on blacks for one lap only and then go for three laps on the reds.  It was kinda my decision to do that.  I think it was not the right decision.  We probably should have done the same as everyone else, go out and get heat into the blacks.  Get a good feel.  Then come in and  go out and push for two laps on the reds.  And then you are in the rhythm.”

“I did not put it all together, but I am here to learn.  Tomorrow is a long race where I can make up positions if the pace is there.  It is super tough when you are stepping into it like this.  Coming into qualifying, I only had 18 laps in an IndyCar.  It was never going to be that easy.”

We spoke to another driver making his first start in an IndyCar, Cody Ware, driving the Dale Coyne Racing w/Rick Ware #52,  after the NASCAR driver had completed the first qualifying session for IndyCar.

“It went a lot better.  Practice this morning was a bit of a struggle.  We tried to  go pretty aggressive, make some changes based on the track conditions for yesterday.  But we have a lot different track  today.  Thankfully, we went back to our notes from the test because the track conditions were fairly similar to that.  It paid off, we were up over a couple of seconds in practice.  So we definitely made all the changes we needed to and feel that we can actually go racing and have some fun with some guys tomorrow.”

“The biggest challenge for me was I have never driven in any series that had an option tire, a special set of tires that you can use to qualifying or for driving during the race.   My biggest adjustment was getting used to the red set of option tires.  We ran both of our sets in qualifying.  So after the first run, we figured out a few things that I can do to learn and pick up some speed.  And we were actually able to put that together for our second run.  I was very happy because we are actually making some progress.”

WHAT DID YOU AND YOUR TEAM KNOW THAT OTHERS DIDN’T KNOW TO GO OUT ON PRIMARY BLACK TIRES?

“We knew it this morning that this was what we were going to do. I didn’t know where everyone else was at, but I knew this was my plan this morning and everyone was onboard with it. Gavin was inline, and Tim was as well. Just happy it worked out. I’m a little surprised more didn’t do that. The degradation has been the talk of the weekend. The tires are wearing out. So we needed to mix it up I think. It was going to be hard to make used tires work. It was a huge drop off on second runs. Doesn’t matter what tires you are using. I was really happy with that. Car has been phenomenal. Gavin did a great job. Boys did a great job. Super happy for Hitachi. Second pole in a row. We’ve got to get them a win though. But this is a great day. Team Chevy has done such a good job for us, I would like to get them a win. Obviously, we were good last weekend, we just didn’t close the deal. So we are going to work on that tonight and hopefully, we can finish it off tomorrow.”

DID YOU AND TIME TALK ABOUT LAST WEEK. OBVIOUSLY, THAT IS HIS DEPARTMENT?

“I back our decisions every time. I’m always pleased with what we do. I think I have the best of best as far as what we are doing strategy-wise. Tim is aces and I have a great crew behind me. I never question it. It didn’t work out. People have been asking me constantly, what do we need to do. Do we need to change our approach? I’m going to maintain that we are doing just fine. We’ve had speed all year. It hasn’t worked out 100% on some of these weekends, and that is INDYCAR racing. It’s very difficult to get everything to line up. But that’s what makes the series so exciting. But it can be a little infuriating because everything has to go perfect for you. I think we are doing the right thing. We will try and conjure up the right plan for tomorrow. I think we keep doing what we’ve been doing.”

WHAT IS IT ABOUT YOU AND THIS PLACE? THIS IS YOUR THIRD POLE HERE.

“I definitely love Road America. This is one of the best tracks in the world.

Not just North America. As far as racing a car, you can’t beat this place. The crowd is always big here. I just think the support for INDYCAR racing is massive in this part of the country. This is one of my favorite tracks. It doesn’t matter where you are in the world. This is one of the best places to drive and INDYCAR.”