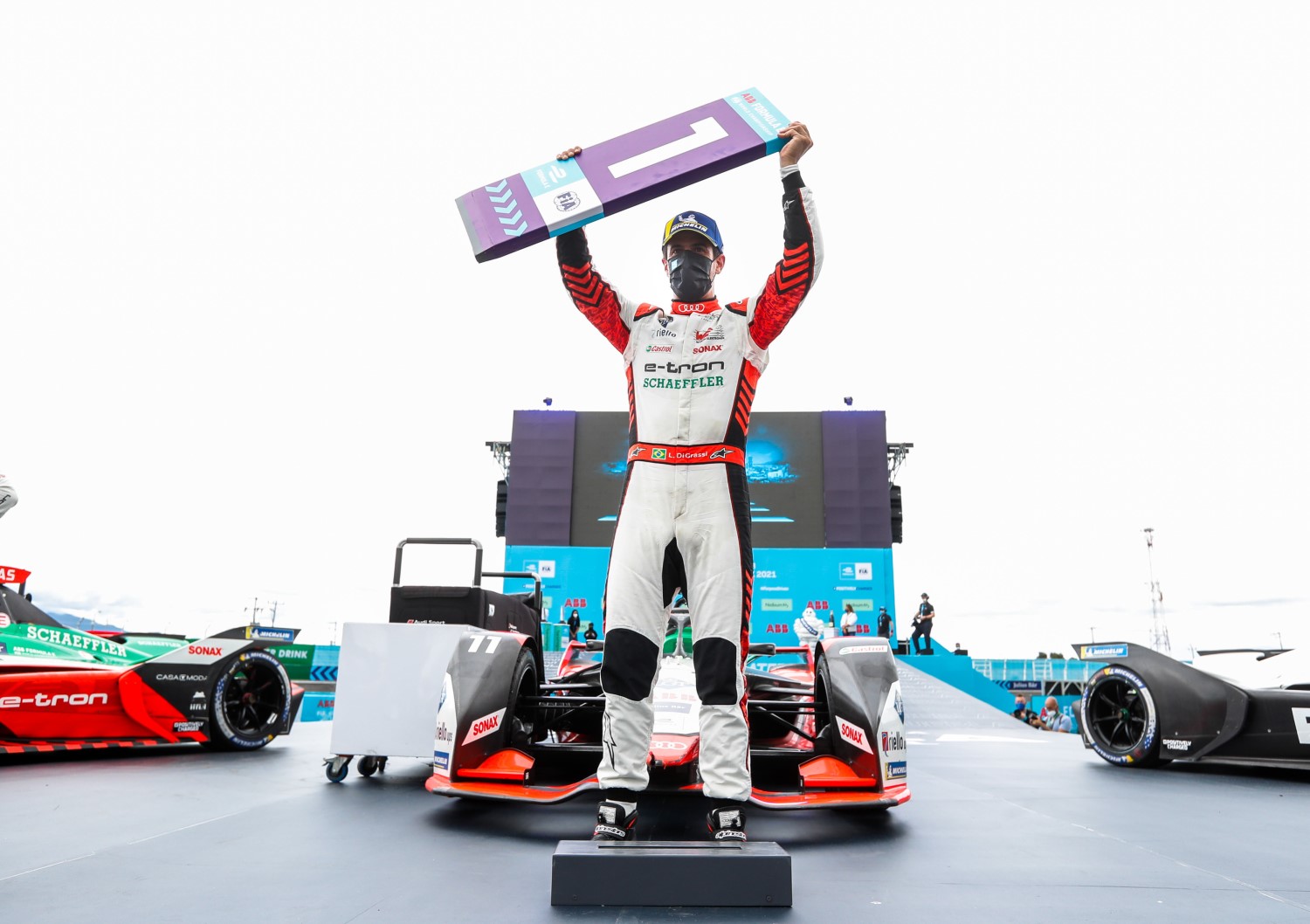 Lucas di Grassi took the race win in the CBMM Niobium Puebla E-Prix Round 8, leading home a one-two for Audi Sport ABT Schaeffler, ahead of teammate Rene Rast – both Audi drivers having driven coolly through the upper order to the front of the pack.

It had looked like a maiden victory was on the cards for TAG Heuer Porsche, with Julius Baer Pole Position sitter Pascal Wehrlein leading the contest from the off, only for the Porsches to be disqualified for failing to declare their tires which left di Grassi and Rast one and two, with ROKiT Venturi Racing’s Edoardo Mortara rounding out the podium.

Championship front-runner Frijns came into contact with compatriot Nyck de Vries mid-way through the contest (Mercedes-EQ), which ensured neither would end the day with points – Frijns being slapped with a 10-second penalty.

“Mexico feels like a second home to me, I love being here. This was an entirely different track from the one in Mexico City, but it is great that we managed to make this event happen here during a pandemic. My team worked relentlessly to come here and turn this season around. This track doesn’t make overtaking easy, you have to take every chance to overtake without losing energy. I feel sorry for Pascal, he did a fantastic race. It happened to me in Rome, so I know how it feels. From now on, we need to keep doing our work and try to test the car as much as we can.”

“We had the pace all along despite not having an ideal start to the season, but we are back. We need to keep our head down and continue to work hard to turn this season around. We deserved the 1-2 today. In qualifying we didn’t look very competitive, but that changed during the race. Tomorrow we need to improve our performance in Qualifying and aim to score some points for the team.”

“I am extremely happy to be back on the podium today. During the break we studied all the data gathered from the first half of the season and learned from our mistakes. The team is putting everything in place. In the championship we have to face big manufacturers, but we have a good engineering team and a good powertrain, and we can be just as competitive.”

Amiel Lindesay, Head of Porsche Operations Formula E: “Pascal did a flawless job today. After setting pole position, he was the first across the line in the race. Unfortunately, we made a mistake that cost us our first Formula E victory. Such things must not happen. We’ll work through this incident together. We’re a team after all: We win and we lose together. Tomorrow is another day. We’ll come back even stronger.”

Pascal Wehrlein, Porsche works driver (#99): “It’s hard to find the right words for what happened today. After qualifying on pole, we deserved the first win and we did it too on this track. Ultimately, a mistake was made in the tire registration, which wouldn’t have changed the performance. In my opinion, disqualification is a very tough penalty. But now we’re looking ahead and we’ll attack again tomorrow.”

André Lotterer, Porsche works drivers (#36): “That was not an easy day for us. First of all, it’s a shame that Pascal and our team were denied today’s victory. After such a convincing performance, we were not rewarded for it, unfortunately. My race was a mixed bag. I didn’t feel particularly comfortable in the car today so it was difficult to maintain my position. We get another chance on Sunday.”