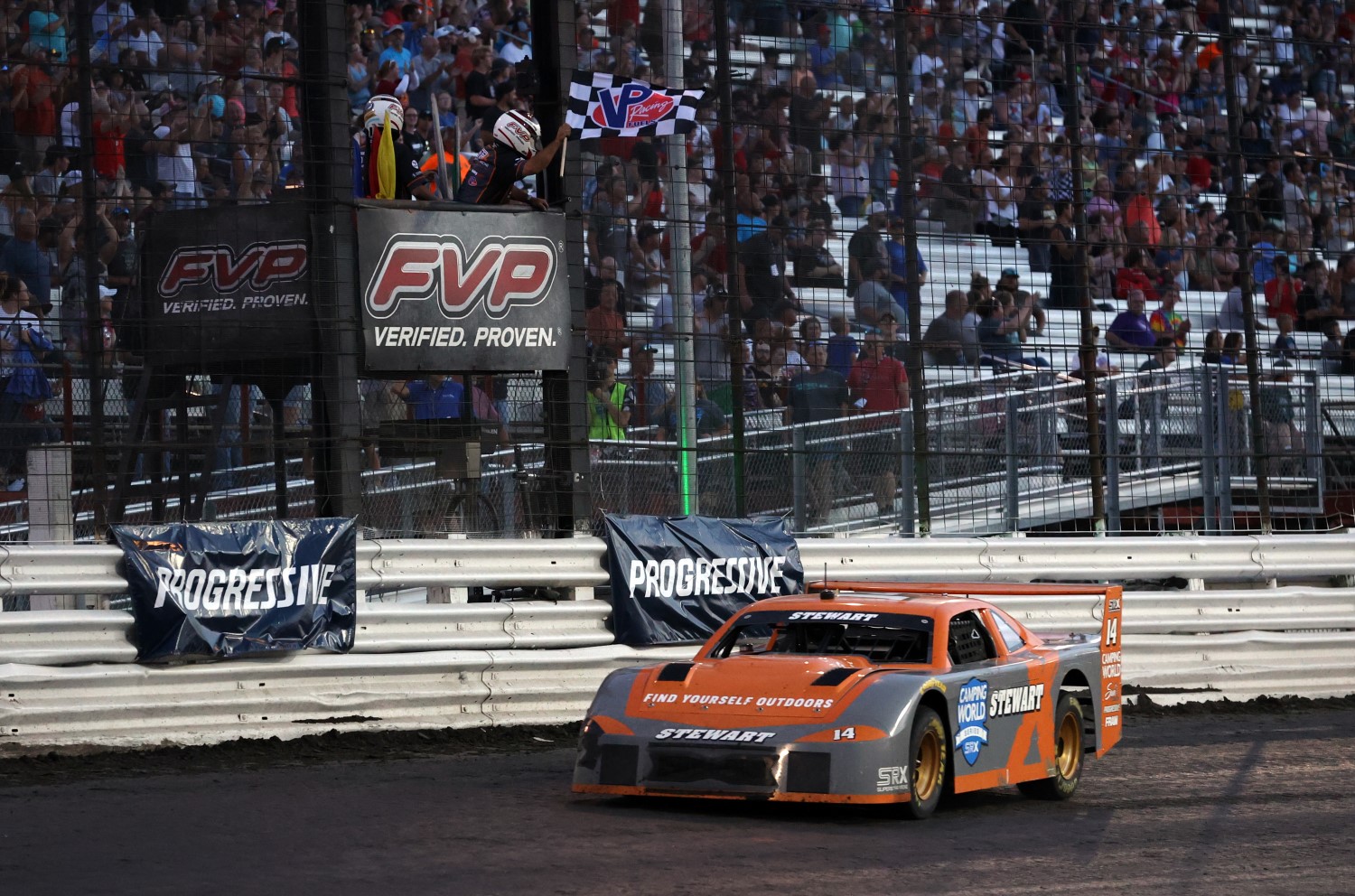 “It’s the first time I’ve been in victory lane at Knoxville,” said Stewart, who has witnessed his sprint car drivers at Tony Stewart Racing win the prestigious Knoxville Nationals 11 times. “This is where I’ve watched Donny Schatz and Steve Kinser and the greatest of the greats in sprint car racing. This is the place I’ve always wanted to be, for sure, so this is pretty cool.

“This is the Sprint Car Capital of the World, and I want to thank the Knoxville staff and all the fans. They’re not used to tin tops, and if they see tin, they want to see it on top of the cage, not surrounding the cage. Just appreciate the fans and everybody for letting us come here.”

Stewart won the first heat race and finished fourth in the second heat race to line up first in the feature event. He led the first 13 laps until Michael Waltrip took the top spot, but Stewart reasserted himself on lap 21 and held the point for the final 30 laps.

“My goal coming into this race was to prove to everyone that I deserved to be here. I feel like we did that tonight, running second to Tony Stewart, that’s a huge accomplishment for me,” said Deegan, a three-time winner in the NASCAR K&N Pro Series West – one of which came on dirt Feb. 28, 2019 at the Las Vegas Motor Speedway Dirt Track. “I feel like we just ran a clean race, we just wrapped the bottom, stayed consistent, ran my line and finished second.”

Deegan substituted for Tony Kanaan, as a schedule conflict prevented him from competing at Knoxville. The 19-year-old Deegan will fill in for Kanaan again July 10 at Slinger (Wis.) Speedway as Kanaan is slated to race in his native Brazil.

Francis is the winningest driver in the 55-year history of the SCCA Trans Am Series, all while being just 23 years old. He is the youngest champion in Trans Am history and is the youngest professional driver to win seven consecutive championships. Francis finished fourth in the Camping World SRX Series season-opener last Saturday night at Stafford (Conn.) Motor Speedway.

“Not too bad for my second-ever dirt race,” Francis said. “We were just kind of riding around there trying to save the tires as much as I could. The car wasn’t as good in the feature as it was in the heat races, so I was just trying to keep the back end underneath me and just try to save it as much as I could, try to keep my position and I really had an awesome battle with Hailie out there. I was trying to get to the back of Tony’s bumper to try and get by him, but you can’t be happier than this. It was an awesome race. The car’s a little beat up, but I can’t wait to get to the next one.”

The victory marked Stewart’s third win of the season – all of which have come on dirt. He began 2021 by winning the final feature of the inaugural Wild Wing Shootout 410 sprint car event Jan. 24 at Arizona Speedway in San Tan Valley and then the All-Star Circuit of Champions 410 Winged Sprint Car feature April 15 at Virginia Motor Speedway in Jamaica.

“I thought our drivers did a fantastic job. I watched a lot of great racing tonight,” said Ray Evernham, co-founder of the Camping World SRX Series. “I’m happy for the guys who won, but you know me, I’m worried about the people who didn’t and I want to know what they thought.

“I felt like, for our first race on dirt, it was pretty respectable, really. We had a couple of little problems, but no really big issues, and I think the fans saw some great racing. We’ve got to work on our cars’ cooling a little bit. I think we need more right-side fiberglass, for sure, but other than that, I thought it was a really good race.

“We’ll go ahead and review the format, time-wise. I really want to know what the fans thought, what the drivers thought. I’m not afraid to tweak this thing to get it right.”

Swanson is a native of Kingsburg, California, who resides in Indianapolis. His five USAC Silver Crown championships (2014, 2015 2017, 2018 and 2019) are the most in series history, as are his 30 career Silver Crown wins and 31 Silver Crown poles. Swanson holds the Silver Crown record for most consecutive wins (five) and he is the all-time series leader in podium finishes and laps led. In four of his last five Silver Crown starts at Eldora, Swanson has finished in the top-five. He is still searching for that elusive first win at Eldora, with second place in the 2015 4-Crown Nationals his best finish at the half-mile, dirt oval.

Speed is one of the most versatile drivers in motorsports. His career began with his climb up the American open-wheel ladder and it took him all the way to Formula One in 2006 and 2007, after which he turned his attention to American stock car racing, where the Manteca, California-native rose to the elite NASCAR Cup Series as a driver for Team Red Bull. Over the last decade, Speed has made his mark on the worldwide Rallycross stage, winning three Summer X Games gold medals from 2013 through 2015 for Team USA and five consecutive Rallycross championships from 2013 through 2017 for Andretti Autosport.

After Eldora, the Camping World SRX Series returns to pavement July 3 at Lucas Oil Raceway near Indianapolis. It then ventures north to SlingerSpeedway on July 10 before its season finale July 17 at the Nashville Fairgrounds Speedway.

Every Camping World SRX Series race is broadcast live at 8 p.m. ET on the CBS Television Network with streaming live on Paramount+ Premium.

Camping World SRX Series Championship Standings (after Round 2 of 6):