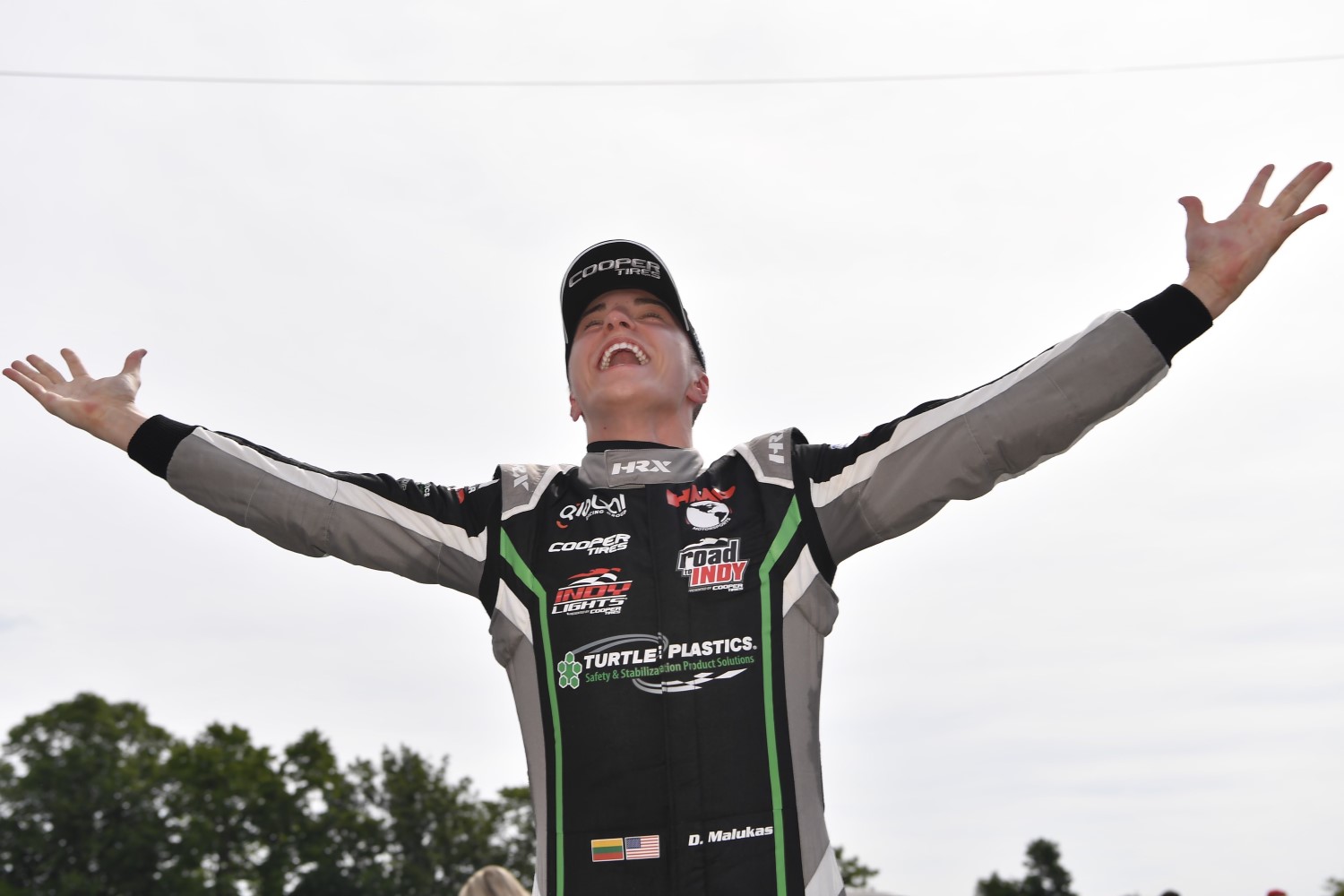 The battle for the Indy Lights Presented by Cooper Tires championship – and a scholarship valued at almost $1.3 million to ensure entry into a minimum of three NTT INDYCAR SERIES races in 2022, including the Indianapolis 500 – took another twist today in the second leg of the Cooper Tires Grand Prix of Road America Powered by AER. Sporting new colors on his HMD Motorsports Dallara IL-15, David Malukas, from Chicago, Ill., rebounded from a disappointing Saturday at his home track to score another emphatic victory. It was enough to move him back into the championship lead – the fourth lead change in as many races at the halfway point in the 20-race season.

Robert Megennis, from New York, N.Y., backed up his strong podium performance from yesterday by finishing second for Andretti Autosport, while rookie teammate Daniel Frost, from Singapore, had to be content with third – his first podium result in Indy Lights – after starting from pole position.

Frost started from pole for the second successive race after securing the Cooper Tires Pole Award during qualifying on Saturday morning, but the quest for his maiden victory was made a little harder when Malukas, who started second, used the draft and then slipped past on the inside line as they headed into Turn One for the first time.

There was a brief caution period following an incident on Lap Two which saw Englishman Toby Sowery’s early charge for Juncos Racing ended by a looping spin and light contact with the wall in Turn Six due to a slight tap from Australian Alex Peroni (Carlin). Afterward, Malukas put his head down and took advantage of the battling between teammates Frost and Kyle Kirkwood, from Jupiter, Fla., to edge away in the lead.

After claiming the championship lead yesterday by virtue of his fourth win of the season, Kirkwood piled the pressure on Frost, only to suffer a suspension problem which sent the double Road to Indy Presented by Cooper Tires champion grass-cutting at Turn 14. Kirkwood limped back to the pits for repairs, then gave a glimpse of what might have been by being comfortably the fastest car on track in the closing stages. Unfortunately, he was already four laps down to the field, and had to settle for an unrepresentative 12th place.

As Malukas pulled away in the lead, Frost instead came under pressure from Megennis, who used his AER engine’s push-to-pass feature to draw alongside Frost as they accelerated up the start-finish straight to begin Lap 15. The pair battled side-by-side for the next two turns before Megennis managed to make the move stick in Turn Five.

Megennis pulled away in second to cap his excellent weekend, leaving Frost to narrowly fend off another challenge from Peroni in the closing stages. Peroni’s performance was particularly noteworthy by the fact he had been obliged to make a pit stop for repairs during the earlier caution period following his incident with Sowery.

Former championship leader Linus Lundqvist, from Stockholm, Sweden, ended a disappointing weekend by overtaking Italian-Canadian Devlin DeFrancesco (Andretti Steinbrenner Autosport) for fifth place a couple of laps from the finish. It was enough to move Lundqvist into a tie for second with Kirkwood in the points table.

A little farther back, rookie Christian Bogle, from Covington, La., continued his recent rapid progress by moving up from 13th on the grid to finish eighth and claim his third Tilton Hard Charger Award.

The second half of the 20-race Indy Lights season will kick off in two weeks’ time at the Mid-Ohio Sports Car Course in Lexington, Ohio, on the July Fourth weekend, once again in conjunction with the NTT INDYCAR SERIES.

Provisional championship points after 10 of 20 races:

David Malukas (#79 HMD Trucking-HMD Motorsports Dallara-AER IL-15): “Road America means so much to me. I’ve been here since I was a little kid watching my dad race. It really is my home track so it’s very emotional. I’m usually quite calm but I was so happy on the radio at the checkered flag. It may have looked boring but it was such a mentally stressful race. I really wanted to get that win, especially for all the Turtle Plastics people that were here. Fastest turtle on track!

“The start was looking similar to yesterday but Danial wasn’t expecting me to go to the inside this time. After I got the lead, it was just head down and try to stay out of push-to-pass range. The (Cooper) tires were amazing, I had plenty of speed. I’m so glad that we got another win and the points lead back. I hope we can keep it going.”

Robert Megennis (#27 Sirius/SailPoint/Data Robot/Juniper/Cybereason-Andretti Autosport Dallara-AER IL-15): “That was a blast! I had another bad start so I had to pass a bunch of cars but it was an awesome race. We had such good race cars. I did my best to manage the tires and save the push-to-pass so we could get by Danial in the end and it paid off. If I hadn’t made those early mistakes, I think we had the pace to win this race, we were the fastest car out there, but I know we’ll be back. It’s great to have such an overall solid weekend and build on that. We’ve got our stride back, Andretti got its stride back, so I think you’ll see a lot more of us up front.”

Danial Frost (#68 DEN-JET Andretti Autosport Dallara-AER IL-15): “Today was a much better day. It was nice to come out of that first lap clean. Malukas got me at the start and was able to maintain that for the entire race. It was a great battle with Robert. He did a great job and was able to get past me in the end. Seeing Robert fully send it on the outside was pretty interesting! We dueled it out but were very respectful in our side-by-side action. I think we still have some work to do on the car, but I’m hoping to get to the top next race weekend.”