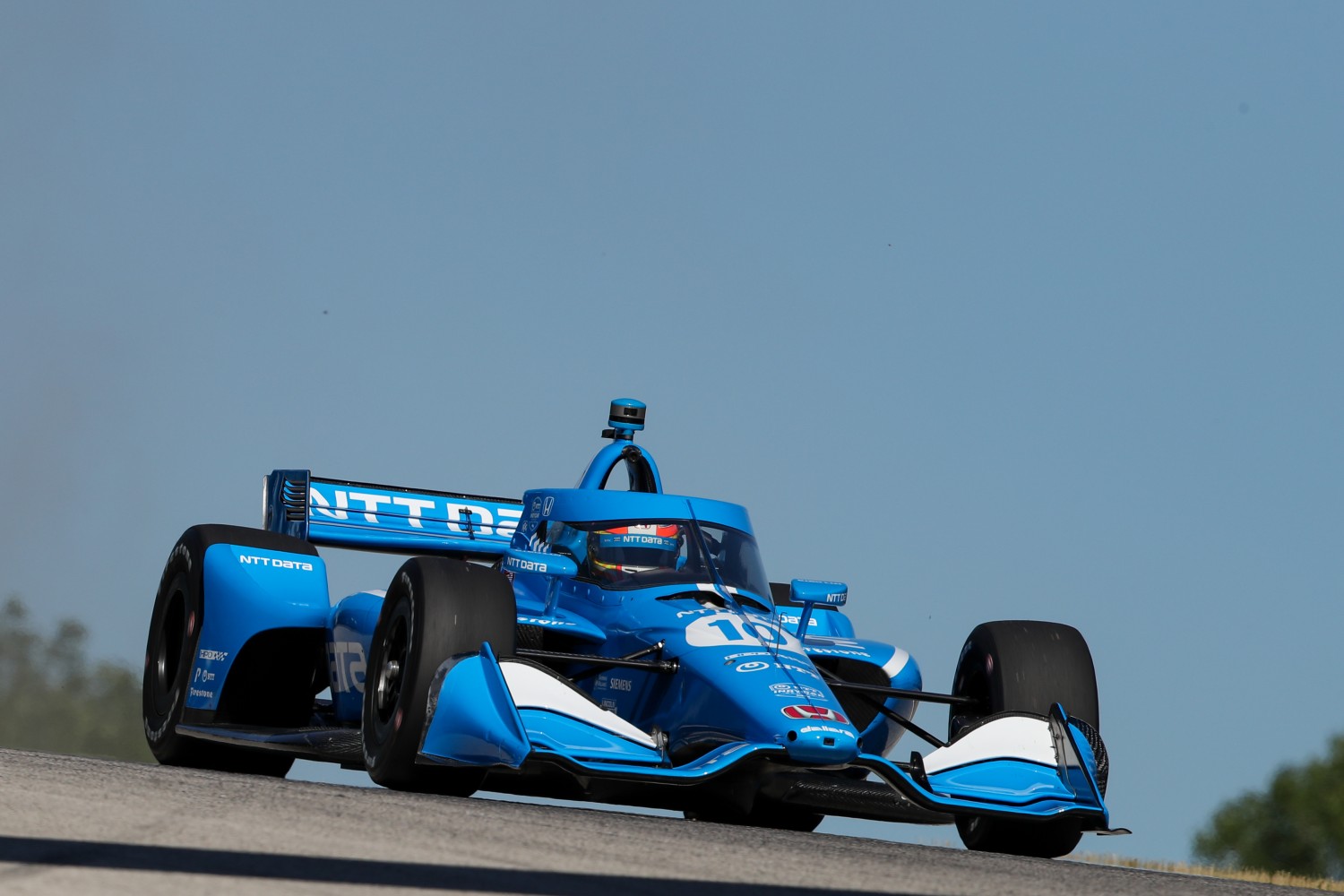 Polesitter Josef Newgarden led 32 of 55 laps on the 4.0-mile Road America circuit but his Chevy engine gave up the ghost on the last green flag start with 3 laps to go, handing the Rev Group GP to Alex Palou.

Until Newgarden’s engine issue, Palou in the #10 Ganassi Honda had nothing for Newgarden #2 Penske Chevy despite a couple of cautions that allowed Palou to close right up on the back of Newgarden.

But as they say, it’s not over until it’s over.

Palou easily held off the most talented Andretti Autosport driver, Colton Herta, who finished 2nd, 1.91s behind in his #26 Gainbridge Honda.

It was Palou’s 2nd IndyCar win of the year, and he takes the point lead with 349 over Pato O’Ward who has 321.

“It always feels awesome even if it’s your lucky day or just because you have really good pace,” Palou said. “We’ve been close. Indy road course, Detroit, Indy 500, and today I was like, ‘Oh, no, we need to get that win.’ A win is a win. It’s always the best thing.”

“Down the front straightaway, as soon as I got to fifth gear, I tried to shift to sixth, and it didn’t take the selection, so I was stuck in fifth,” Newgarden said.

“I was trying to get it up to sixth gear, and it wouldn’t go. Then I got stuck in fifth in Turn 1. I finally got it to go down, and I just could not get it to upshift after that. I got it to first, essentially, and tried to stay out of the way.”

Will Power was 3rd for Team Penske  and the final podium position.

The move of the race had to be when Grosjean, in the underfunded Dale Coyne Honda,  out-drove Alexander Rossi with a gutsy pass on the California in Turn 5 late in the going.

“Top five at Road America, what a day, what a race,” said Grosjean.

“We had some pretty cool battles out there. It was a wild race, but we made some really good setup changes from the warm-up to the race and the Nurtec ODT car felt good. I managed the tire degradation fairly well. I’m really pleased with the work of the team, so hopefully we’ll have more fun racing at Mid-Ohio in a couple of weeks.”.

Newgarden led a race-high 32 laps in the No. 2 Hitachi Team Penske Chevrolet and looked to be poised for his and Team Penske’s first victory of the season on a restart at the end of Lap 53. But Newgarden’s car suffered a mechanical problem when the green flag flew, and Palou blew past him on the outside before Turn 1 on Lap 54 for a lead he wouldn’t surrender.

Meanwhile, Newgarden limped the final two trips around the 14-turn, 4.014-mile circuit with his compromised car and ended up a disappointing 21st as the last car on the lead lap.

It was the second straight Sunday of despair for Newgarden, who was passed by O’Ward for the lead with three laps remaining in Race 2 of the Chevrolet Dual at Detroit and ended up finishing second at Belle Isle after leading 67 of 70 laps.

“Down the front straightaway, as soon as I got to fifth gear, I tried to shift to sixth, and it didn’t take the selection, so I was stuck in fifth,” Newgarden said. “I was trying to get it up to sixth gear, and it wouldn’t go. Then I got stuck in fifth in Turn 1. I finally got it to go down, and I just could not get it to upshift after that. I got it to first, essentially, and tried to stay out of the way.

“I’m not sure what happened. Disappointing for all of us. I knew we had a great car all day.”

Newgarden, Palou, Herta and Power all were on the strategy of starting with alternate tires and switching to primaries after their first pit stop, biding their time for a final race for the checkered at the end after other drivers on different strategies cycled through their final stops.

Newgarden was running second, about seventh-tenths of a second ahead of third-place Palou, when leader Oliver Askew – on a different fuel strategy – pitted from the lead in the No. 21 Direct Supply Chevrolet on Lap 51.

But Newgarden’s gap to Palou was erased on the same lap when Ed Jones spun in Canada Corner after the left rear tire on his No. 18 SealMaster Honda appeared to deflate. That triggered the last full-course caution, setting up the final restart duel between Newgarden and Palou that never materialized due to Newgarden’s technical problem.

There were seven different leaders and 11 lead changes, mainly due to daring fuel strategies from teams lacking the pace of the frontrunners. But the dramatic finish was the culmination of a no-holds-barred race that featured ferocious battles for position throughout the field, with cars hip-checking each other and kicking up plumes of dirt off course during the duels.