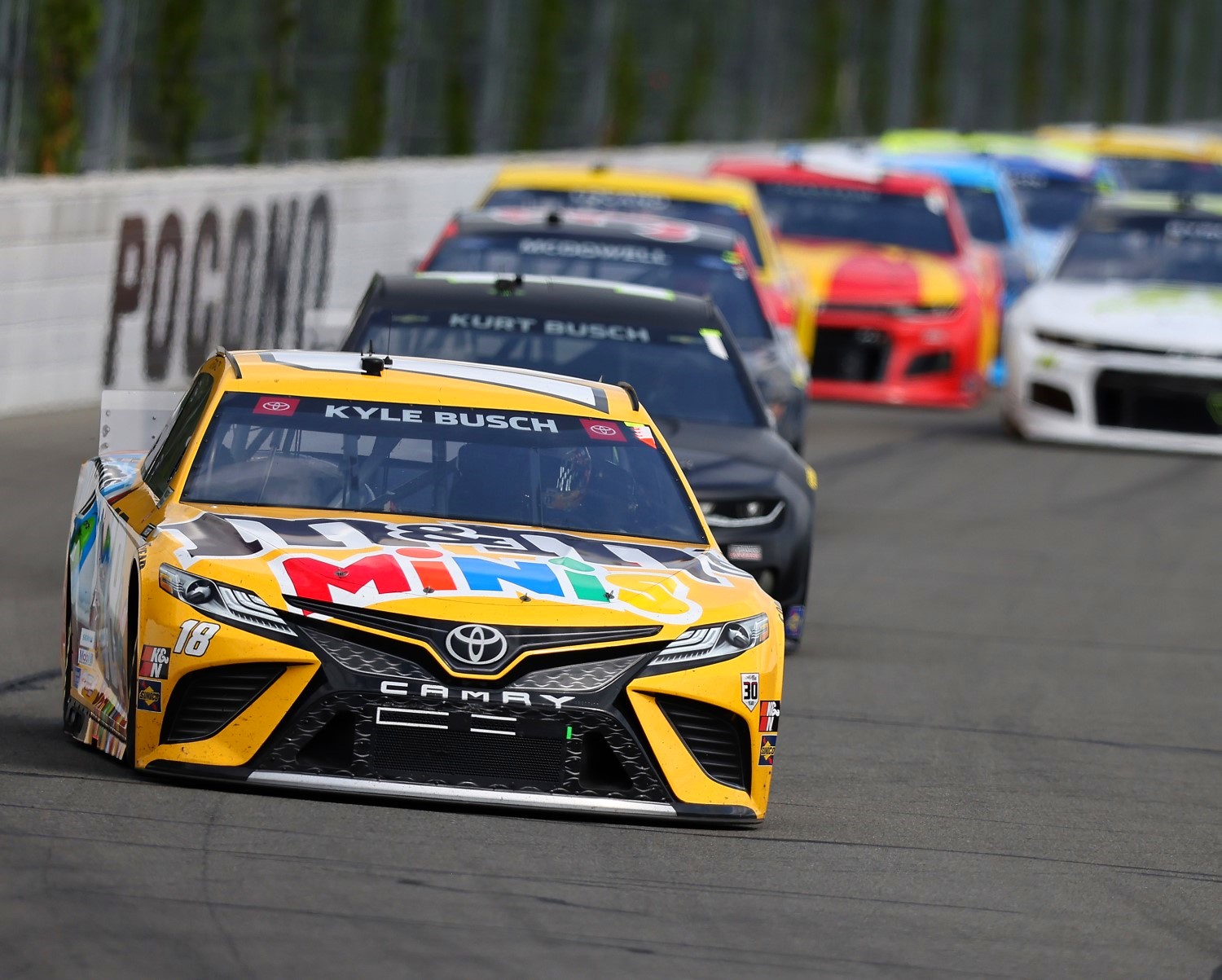 Kyle Busch, running on fumes, his #18 JGR Toyota stuck in 4th gear, won the Explore the Pocono Mountains 350 NASCAR Cup race at Pocono Raceway Sunday as car after car ran out of fuel and had to pit in front of him.

Kyle Larson also nursed his #5 Hendrick Chevy home 2nd on fumes 8.6 s behind. Larson was running his backup car after his primary car was wrecked while leading on Saturday in the last turn of the last lap.

Brad Keselowski was leading in his #2 Penske Ford but had to peel off to refuel and recovered to finish 3rd.

Kevin Harvick and Bubba Wallace rounded out the top-5.

Busch led 30 of the 140 laps in the Explore the Pocono Mountains 350, pushing the No. 18 Joe Gibbs Racing Toyota to an 8.654-second margin of victory as the gas tanks of some fellow competitors — Denny Hamlin and William Byron among them — sputtered to empty. His fourth win at the 2.5-mile Pennsylvania track was the 59th of his Cup Series career.

Brad Keselowski placed third, and Kevin Harvick and Bubba Wallace completed the top five in order as Pocono hosted its second Cup Series event in as many days. For Wallace, the finish was his best of the season and the first top-five result for 23XI Racing.

Busch, Saturday’s runner-up, encountered major issues with his shifter, which initially starting popping out of gear but then became stuck in fourth gear — severely hampering his pit stops and eventually burning out the clutch on his No. 18 Toyota. In the end, gas mileage made the difference and Busch went 46 laps on his final tank of fuel.

Xfinity Series regular Justin Allgaier was a late-hour substitute in the Spire Motorsports No. 77 Chevrolet for Justin Haley, who was shaken up after heavy contact in Sunday’s Xfinity event. Allgaier finished 25th in his first Cup Series start since last July.

Larson, also on a fuel-saving strategy in the closing laps, rallied for a runner-up finish after early contact with Hamlin’s car dented the nose of his No. 5 Chevrolet. On a pit stop under caution, Larson’s crew raised the hood of the car, pounded out the damage and secured it with tape.

“It’s a surprising finish for us,” Larson said. “Our HendrickCars.com Chevy was really loose for a majority of the race. Then we got a lot of nose damage there on one of the restarts. Was off on speed, I felt like after that.

“(Crew chief) Cliff (Daniels) and everybody did a really, really good job managing the race, coached me through saving fuel there at the end. Was hoping that the 18 (Busch) was going to run out. I saw the 11 (Hamlin) running out. I was, ‘OK, they’re teammates, they got to be close to running out.’

“The 18 did pit a lap after us under caution. That actually probably won them the race. But, yeah, second-place finish… I thought we would be outside of the top 20 (at) a lot of points throughout the race today. We’ll take it. Happy about the effort, for sure, all weekend.”

Brad Keselowski led a race-high 31 laps but had to pit for fuel on Lap 132 of 140. As drivers ran out fuel over the final three laps, Keselowski held third at the finish, one spot head of fellow Ford driver Kevin Harvick.

“We ran a really good race but just didn’t have enough fuel to make it to the end like those other guys did,” Keselowski said. “They beat us on power and fuel mileage. We have a lot of work to do to keep up with those guys.

“I’m really proud of (crew chief) Jeremy Bullins and the team. They had the setup really well, and it put us in position and we ran a great race today and maximized our day.”

Bubba Wallace ran fifth, the first top five for the 23XI team that debuted this year under the co-ownership of Hamlin and NBA superstar Michael Jordan.

Despite finishing 14th after running out of fuel, Hamlin retained the series lead by four points over Larson. Sunday was another hard-luck story for the driver of the No. 11 Toyota.

“I mean, you’re trying to win or you’re trying to get the best finish that you can,” Hamlin said. “But ultimately, we just didn’t save enough. The 18 I think came in and got topped off because he had transmission issues. That was essentially the race.”

Q: I don’t know where to start with this one. Kyle Busch winning at Pocono. Have you ever had a more bizarre win in your life? Stuck in fourth gear for a hundred some laps.

KYLE BUSCH: Yeah, stuck in fourth gear. About out of gas (laughter). Just saving, just riding, playing the strategy the best we could with what was given to us.

Just can’t say enough about everybody on my team, everybody at Joe Gibbs Racing, Toyota, TRD, all the work they’re putting in. Sometimes these races aren’t always won by the fastest car, but I felt we had the fastest car. Even though we were in the back and behind and having to come through and persevere through being stuck in fourth gear, no clutch, all that stuff. It’s all burned out. Nothing left in this M&M’s Minis Camry.

It was awesome today. Thanks to Rowdy Energy, Interstate Batteries, Stanley, Reem, everybody that works on this car. A lot of our M&M’s friends are here today, so it’s really cool to have them here back at the track. Thanks to Rowdy Nation, all the Kyle Busch fans up there supporting and pulling for us. Really great to pull off another win here at Pocono. Feels good.

Q: At one point you were like, Should we pack it up and head home today? At what point did that switch for you?

KYLE BUSCH: You know, I don’t know. You don’t know, you know? The biggest thing was trying to time the restart right. Leave pit road, come back around, be at full speed by the time the field takes the start/finish line. We were a little bit off on that. We were from here to pit road off on that. That’s about all we could do. That’s all you could think about doing in that situation, just thinking through any opportunity and obstacle that’s on you. That’s just what we did.

Again, great job to my team. Thanks to Ben Beshore. Thanks to Matt the fuel guy for getting it full. That’s a big important one today. Really great to take home another checkered flag.

Q: You saved enough to get here. How did you do it?

KYLE LARSON: I don’t know. It’s surprising finish for us. Our HendrickCars.com Chevy was really loose for a majority of the race, then we got a lot of nose damage there on one of the restarts. Was off on speed. I felt like after that.

Cliff and everybody did a really, really good job managing the race, coached me through saving fuel there at the end. Was hoping that the 18 was going to run out. I saw the 11 running out. I was, Okay, they’re teammates, they got to be close to running out.

The 18 did pit a lap after us under caution. That actually probably won them the race. But, yeah, second-place finish, I thought we would be outside of the top 20. A lot of points throughout the race today; we’ll take it. Happy about the effort for sure all weekend.

Q: With the damage on the car and where you saw yourself with fuel, how much of a believer he did he make out of you? Did you think he could get here?

KYLE LARSON: Not until we actually started saving fuel. Seemed like every point of the race, everything that happened in the race, nothing went my way. Restarts, just guys messing up in front of me, me getting shuffled out of the groove, bad lane choices on my part, everything didn’t go my way.

Cliff did a really good job keeping my head in it, coached me through saving fuel. Yeah, I mean, I had a lot of hope there at the end thinking that the 18 might run out.

Q: Did you get set to start pushing a little bit too early at the end of the race? What was the difference?

DENNY HAMLIN: Just do what I’m told: Don’t run when I’m not supposed to run, run when I’m supposed to run. The result is we pitted on the last lap for three weeks in a row. That’s tough. I mean, I hate seeing the white coming to pit road. It’s just so frustrating.

Fuel mileage has got us the last two weeks. Lug nuts the week before. We’re running fast. We’re getting a little better. I think overall we had a little bit more speed this weekend than what we’ve had the past few weeks.

Q: You’re the only one who ultimately had to pit with a lap or two to go. Give us a sense what that challenge is like.

DENNY HAMLIN: I mean, you’re trying to win or you’re trying to get the best finish that you can. But ultimately we just didn’t save enough. The 18 I think came in and got topped off because he had transmission issues. That was essentially the race.