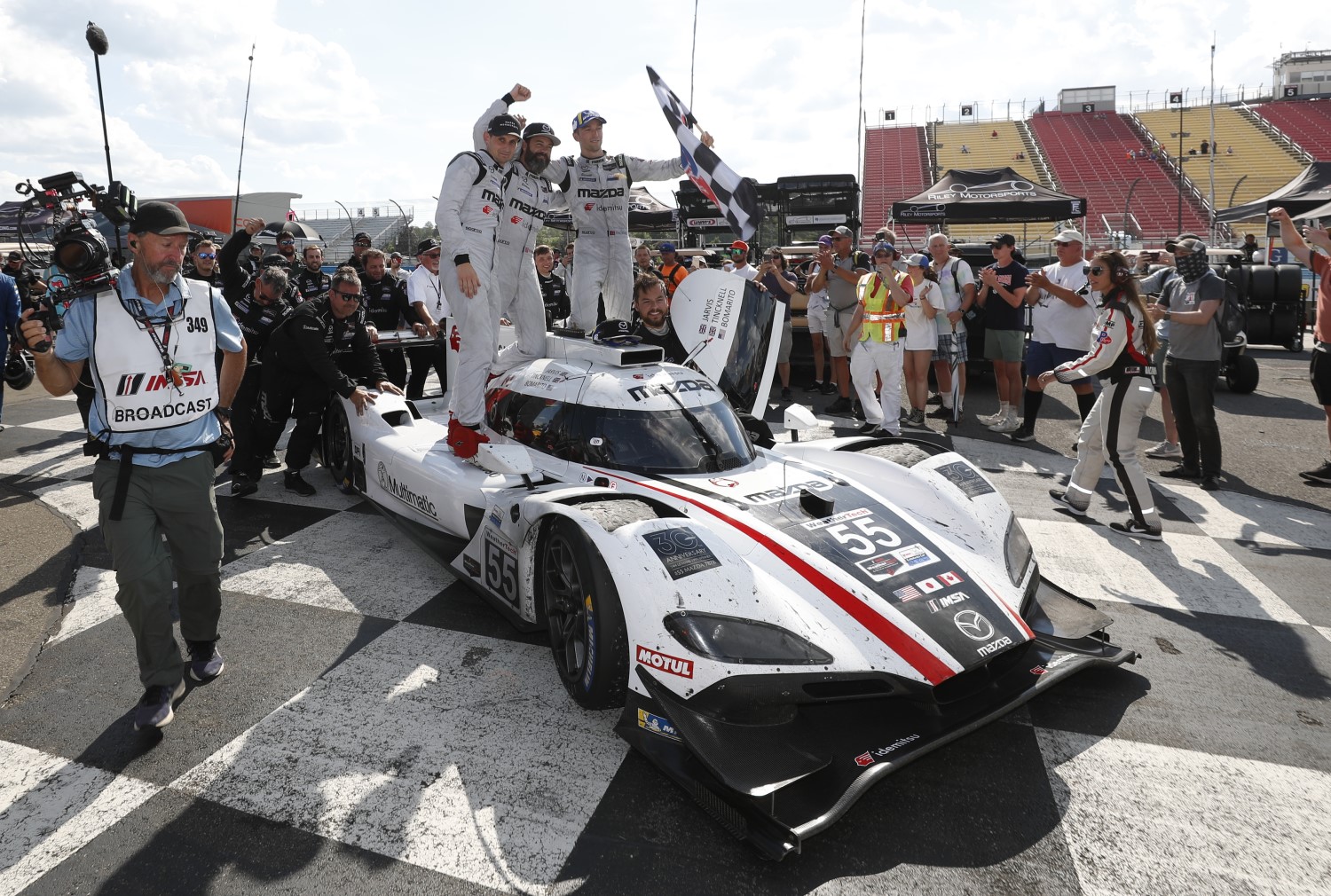 Mazda Motorsports, who are quitting after this year, has scored back-to-back wins at Watkins Glen International, with Harry Tincknell stretching the fuel in his No. 55 Mazda RT24-P in Sunday’s Sahlen’s Six Hours of The Glen.

Mazda racing will not develop an LMDh-era prototype and will not go to Le Mans. But that the program is not done yet, it still has race wins and championships to fight for.

Tincknell, who pitted with 53 minutes to go, edged out the No. 60 Meyer Shank Racing Acura ARX-05 of Olivier Pla by 0.995 seconds following a final-hour yellow and restart that shook up the running order.

The two Acuras in the Daytona Prototype international (DPi) class – the No. 10 Konica Minolta and No. 60 Meyer Shank Racing with Curb-Agajanian entries – swapped the overall lead through the opening two-plus hours of the race on the 3.4-mile, 11-turn road course. A full-course caution period 20 minutes before the halfway point brought all the leaders to pit lane and the No. 31 Cadillac, with Felipe Nasr at the wheel, beat the others out of the pits to take the lead and hold it at the three-hour mark.

The two Acuras, the No. 60 of Meyer Shank Racing and No. 10 of Wayne Taylor Racing, were the class of the field early. They qualified 1-2 and led early, but the No. 55 Mazda found the lead on an ambitious fuel saving strategy helped along by a caution with just over 40 minutes remaining. The Mazda saved every ounce of fuel it needed allowing closing driver Harry Tincknell to run all-out at the end of the race. Olivier Pla caught the No. 55 in the No. 60 Acura in the closing laps, but Tincknell held off the Acura and took a momentous win for Mazda.

Drivers Olivier Pla and Dane Cameron combined to lead 125 laps of the 200 lap race in the No. 60 MSR Acura DPi on their way to a second podium (12 Hours of Sebring) of the IMSA  WeatherTech SportsCar Championship season.

Hendrick-Johnson Reunion: Jimmie Johnson and the rest of the No. 48 Ally Cadillac Racing DPi team had a welcome and an interested observer in their pit. NASCAR Hall of Fame team owner Rick Hendrick, whose Hendrick Motorsports operation is collaborating with Action Express Racing to field the No. 48 DPi for the Endurance Cup events, made the trip to Watkins Glen for the start of the race from Pocono, Pennsylvania, where NASCAR Cup Series is racing this weekend.

“I wanted to be here today to support Jimmie,” Hendrick said shortly after the green flag waved. “I love this type of racing. This takes me back to my GTP days with the Corvette. I’m here and keeping an eye on Pocono, too. About the time this race ends, Pocono will kind of be getting right.

“I brought the Ally CEO (Jeff Brown), too, and his father,” Hendrick added. “They are all having fun. I love all kinds of racing, but this kind of racing has a special place in my heart from the Sarel van der Merwe days and that GTP Corvette. It’s changed a lot since I was here.”

Johnson, who drove the second stint in the No. 48 Cadillac, was happy to see his old boss, who was a big part of Johnson’s seven NASCAR Cup championships.

“I’ll take every second I can with Mr. Hendrick,” Johnson said. “I haven’t seen enough of him as I’d like since I retired from NASCAR. This has been a really nice treat today.”

No. 79 WeatherTech Porsche Exits Early: The No. 79 WeatherTech Porsche 911 RSR-19 was one of the earliest casualties in the race. Just three laps in, driver Cooper MacNeil brushed the wall exiting the 11th and final turn with the left side of the car. Soon after, a fire started in the left rear wheel well. MacNeil was able to return the car to pit lane before a larger fire broke out and he scrambled from the car, the day over.

“It’s a shame,” MacNeil said. “The Proton Competition crew worked hard on the WeatherTech Porsche all weekend. We had a pretty loose car all through practice. At the start the car felt good. I was catching the BMWs. I exited the last corner and got into the wall and something broke in the rear, and that’s when the fire started. Big apologies to the team, it is 100 percent my fault. They are going to work hard to rebuild the car for the WeatherTech 240 on Friday.”

Spin Out for No. 2 United Autosports LMP3: The No. 2 United Autosports USA Ligier JS P320 led most of the opening two hours in LMP3 until Austin McCusker spun in Turn 7 and slid into the outside barrier, bringing out the second full-course caution. Following pit stops under yellow for repairs and a drive-through penalty for making the repairs in a closed pit the No. 2 went a lap down and was fifth in class at the halfway mark.

Hard Contact for No. 19 Grasser Lamborghini: The race ended abruptly for the No. 19 GRT Grasser Racing Team Lamborghini Huracan GT3 just before the halfway point. The car spun at the exit of Turn 11 and into the inside wall leading to pit lane. With fire erupting from the rear of the car, driver Misha Goikhberg stopped the car in the middle of pit lane and hopped out unscathed.

Corvette Racing returned to Victory Circle at Watkins Glen International on Sunday with a GT Le Mans (GTLM) victory for Antonio Garcia and Jordan Taylor in the Sahlen’s Six Hours of The Glen. They drove the No. 3 Mobil 1/SiriusXM Chevrolet Corvette to a steamy and hard-fought triumph for the team’s first win at Watkins Glen International since 2014.

Garcia held off a similar charge from BMW Team RLL’s No. 24 M8 GTE, winning by less than a second after a hard-fought final stint. The BMWs have just one more race scheduled this season, so a victory over the part-time factory competition is particularly meaningful for the full-time Corvette Racing program before both are expected to move to the new GTD Pro class as full-time contenders in 2022.

Garcia drove the opening stint, Taylor was in the car for 2.5 hours in the middle of the race and Garcia closed the race as the pairing won for the second time this season.

The No. 3 Corvette was locked in an inter-team battle with Tommy Milner and Nick Tandy in the No. 4 C8.R, which suffered a mechanical issue late in the race that relegated it to fourth in class.

A BMW did find victory in the current pro-am GTD class today. Bill Auberlen and Turner Motorsport beat out the No. 1 Paul Miller Racing Lamborghini by just under six seconds to take their second class win of the season.

Auberlen was investigated for track limits violations in the closing minutes, but would keep his finish without a penalty.

The No. 11 Win Autosport and No. 74 Riley Motorsports cars took class wins in LMP2 and LMP3, respectively.