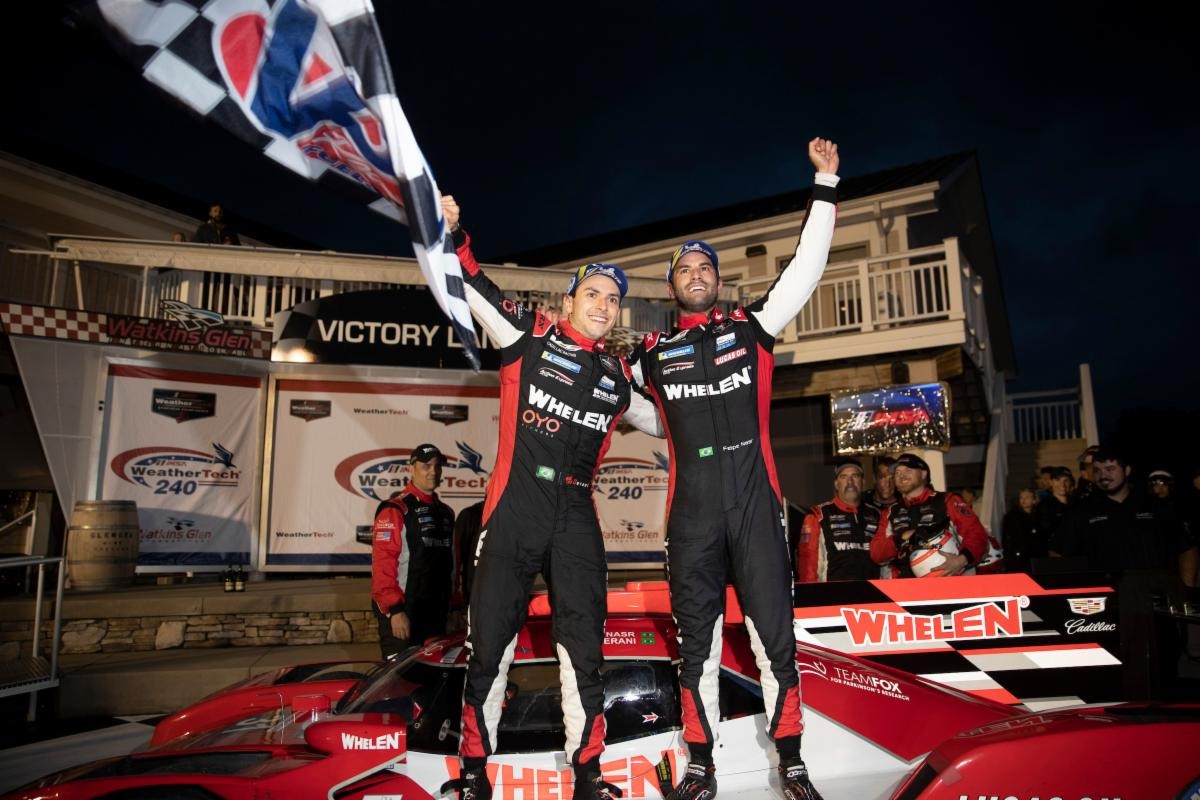 It was an eventful evening at the 3.4-mile, 11-turn track located in the Finger Lakes region of upstate New York. With weather in the area the Cadillac DPi-V.R teams were chasing the Acura cars like in the six-hour race last Sunday. One hour into the two-hour-and-forty-minute race it was red flagged by the IMSA Officials for lightning in the area.

During the red flag period the race clock was still running. With 50-minutes left the field took to the track again. Prior to the red flag the Action Express Racing team had just pitted the 31 to put Felipe Nasr in with fuel and new tires. When the race restarted it was under yellow, this allowed Nasr to save fuel during the pace laps as IMSA reset the field. During this time the other DPi cars pitted for tires and gas leading up to the restart. Once the race went green, Nasr was able to run the car flat-out without the fuel concerns that plagued the Cadillac cars at the six hours to bring the Whelen Cadillac DPi-V.R home for the team’s first win of the season with teammate Pipo Derani.

“It’s a relief,” Derani said of the team’s first win. “I think we’ve shown since the beginning of the year that we have the car and the team to win. But things didn’t go our way at Daytona and Sebring. We were just going race after race thinking is this the one [we’re going to win]? We came close at Mid-Ohio. We came close at Detroit. Now, we finally got the win for the No. 31 Whelen Engineering Cadillac team. The team did a fantastic job. We gambled a little bit on the strategy, and it paid off as we expected. What a drive in the end by Felipe. It’s great for the team – Sonny and Christine [Whelen].

“We just didn’t have enough fuel capacity to make it if it went green all the way,” Nasr said. “So, we opted to do an alternative [strategy]. The crew did an amazing job to put the No. 31 Whelen Engineering Cadillac in victory lane. It was beautiful. It was a long time coming. I’m so happy for all of our sponsors. I think everyone deserves this [win]. The Championship is still on and I think this win gives us even more hope to be back in the game. It was just beautiful the way they [the team] pulled off that call. We were able to take the lead and control our pace. It’s never easy winning. So, it was great to pull that one off.”

In hot pursuit of the 31 was the No. 01 Chip Ganassi Racing DPi-V.R with Renger van der Zande doing the closing stint. He and Kevin Magnussen kept the Cadillac in contention but just couldn’t be in a position to overtake the 31 and settled for second place.

“It was good at the end,” van der Zande said. “The team did a really good job this weekend, but we didn’t have enough for the win. Congratulations to the 31, good to get a Cadillac one-two finish here at The Glen. At the end of the race I could close the gap, but not enough to get by him. I needed heavy traffic for him to make a move. I think I was faster, but never close enough to pass.”

Loic Duval and Tristan Vautier worked hard with the JDC-Miller Motorsports team in the days between the six-hour race and today’s WeatherTech 240 to get more speed from the No. 5 Mustang Sampling Cadillac DPi-V.R. Vautier had the car following the red flag period and drove it to P2. As the front runners reached traffic, he was unlucky and brought the car home in fourth.

“It was definitely an improvement from last weekend, but still a little off with our overall pace,” Duval said. “We were a bit more in the game today. When you don’t have the complete pace to play with the guys you are a little on the back foot. Tristan at the end had a good restart and was P2 but got a little unlucky in the traffic. We will evaluate the last two weekends; we scored some points today which is good for the team.”

The LMP2 class win went to the No. 52 PR1/Mathiasen Motorsports Oreca 07 Gibson of Mikkel Jensen and Ben Keating, after missing out on top honors last weekend at the six-hour.

Garcia got the jump on Corvette Racing teammate Tommy Milner – sharing the No. 4 Mobil 1/SiriusXM Corvette with Nick Tandy– on a traffic-filled restart with 28 minutes remaining in a storm-interrupted race.

Taylor led from pole position before Tandy moved ahead in the No. 4 Corvette about 15 minutes into the race. The gap between the teammates constantly ebbed and flowed with traffic – from slower GTD and LMP3 cars and the quicker DPi and LMP2 runners.

Taylor was the first Corvette driver to hit pitlane at 51 minutes running. He came in from second place in class and handed over to Garcia, who left with a full tank of fuel and fresh Michelin tires. Tandy carried on for another two laps before stopping just before the pits closed for the race’s full-course caution period.

Milner got in the 4 Corvette and returned to the lead behind the safety car. Heavy rain started to pelt parts of the circuit with the field under yellow. Two laps later, race officials halted the race due to a lightning strike in the immediate area of Watkins Glen.

With weather in the area, MacNeil started the No. 79 WeatherTech Racing Porsche 911 RSR for the two-hour-and-forty-minute race at The Glen. He was able to complete his stint in the car and turn it over to Campbell who spent just 20 minutes in the car until the race was red flagged for lightning in the area. The IMSA officials called all of the corner workers in as the clock remained running. With 50-minutes left on the clock the field took to the track again. As the weather and track conditions changed the Proton Competition crew never put Michelin rain tires on the WeatherTech Racing Porsche. Campbell did a great job to bring it to the checker in third.

“It is a bit of a difficult weekend with the conditions,” MacNeil said. “The Proton Competition crew did a great job rebuilding the car from last weekend. The first real session we got to make sure everything was good with the car was in the race. We had some setup issues during the race, but the car is one piece and we will be back and ready to go for Lime Rock where we will compete for an overall race win.

“I am racing in Italy with Gianmaria Bruni and Christian Ried next weekend. Monza is a track I know well. We will be looking for a podium run there too.”

“It wasn’t an easy day with the red flag and the lightning in the area,” Campbell said. “In the end we brought it home. We stayed out of trouble and learned some things for the next one. We never put rain tires on the car, always slicks. It was pretty treacherous at times, but I kept it on the track. I was quite surprised that there were no further yellows with a lot of guys on slicks.”

Vasser Sullivan Racing broke through to claim its long-awaited first class victory of the season, in a 1-2 run for the pair of Lexus RC F GT3s.

Jack Hawksworth took his No. 14 Lexus to the win ahead of teammate Zach Veach.