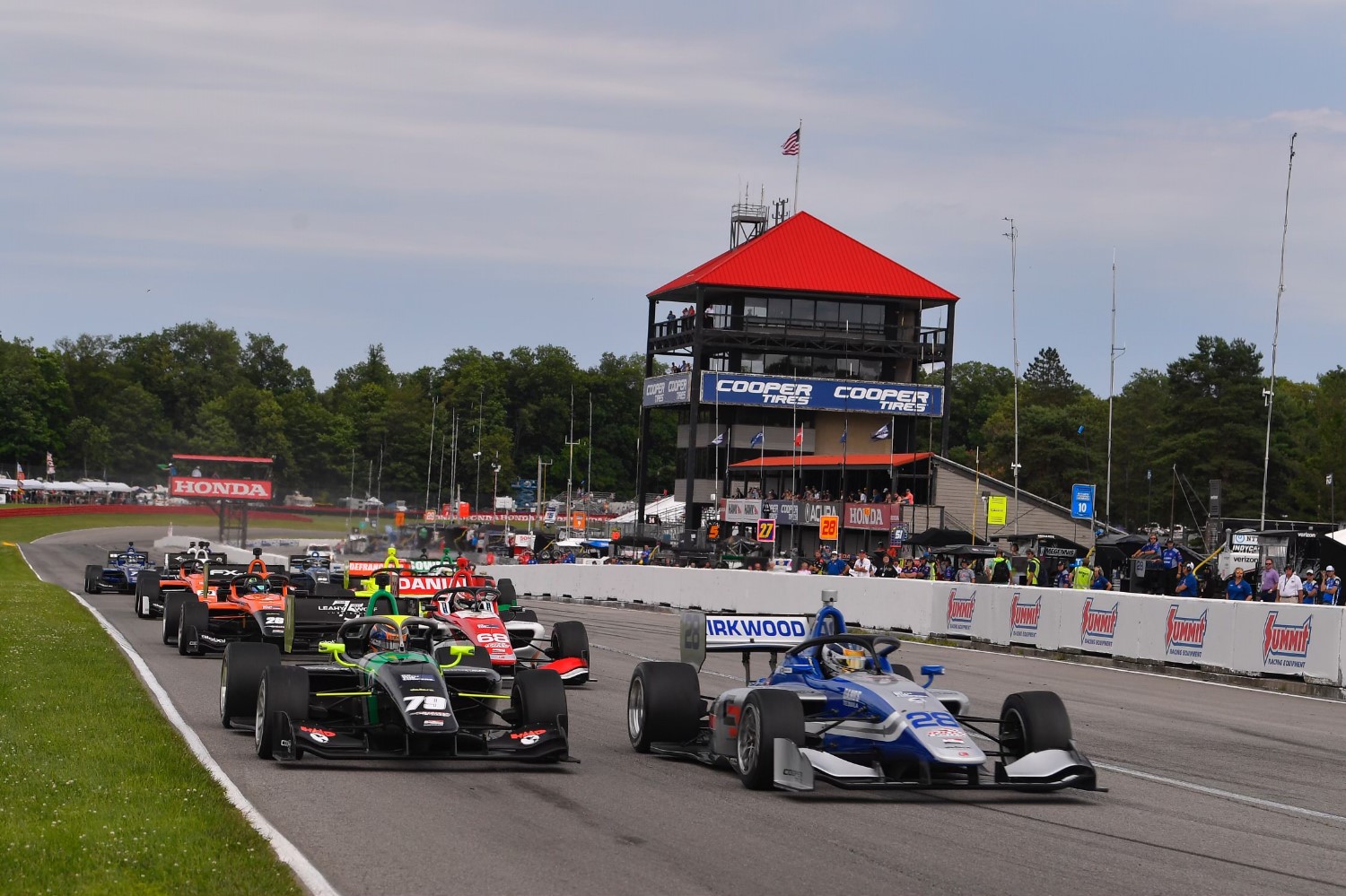 Something had to give. Kyle Kirkwood and Linus Lundqvist were tied on points entering this weekend’s Cooper Tires Grand Prix of Mid-Ohio, both of them trailing David Malukas by just eight points in the quest for the Indy Lights Presented by Cooper Tires title and a scholarship valued at $1.3 million to move up into the NTT INDYCAR SERIES in 2022.

Kirkwood, 22, served notice of his intentions early, posting the fastest times during testing on Thursday and Friday, then snagging his third Cooper Tires Pole Award during qualifying yesterday.

He continued that imperious form this afternoon, leaping into the lead at the start and never looking likely to surrender the point. Malukas, 18, from Chicago, Ill., chased hard during the early stages, remaining within a second of Kirkwood until making a mistake and sliding off course at Turn Nine. Malukas was fortunate to avoid contact with the barriers, and such was the pace of the leaders that he managed to rejoin the asphalt with the loss of only one position – to Frost.

Kirkwood continued on his merry way and eventually took the checkered flag comfortably clear of Frost, who was delighted to equal his best career finish thus far, matching his runner-up result on the streets of St. Petersburg, Fla., in April.

Frost will have another opportunity to chase his first Indy Lights win tomorrow morning, when he will start from pole position after posting the fastest time – slightly quicker than the pole for today’s race – during a separate qualifying session this morning.

Sowery made up two positions on the opening lap but found Denmark’s Benjamin Pedersen (Global Racing Group with HMD Motorsports) a much tougher nut to crack. Finally, with 10 laps remaining, Sowery was able to squeeze past with a bold outside-line move at Turn Four. Sowery then steadily whittled down a deficit of more than three seconds to DeFrancesco but ran out of time to mount a serious challenge for fifth position.

The green flag for tomorrow’s 12th round of the Indy Lights season is scheduled for 10:00 a.m. EDT, immediately prior to the NTT INDYCAR SERIES’ Honda Indy 200 headline event.

Provisional championship points after 11 of 20 races:

Kyle Kirkwood (#28 Road to Indy/Cooper Tires/Construction Contractors’ Club-Andretti Autosport Dallara-AER IL-15): “After a not-so-great race at Road America, it’s nice to come back here and get a win. Mid-Ohio is one of my favorite tracks and it’s nice to get the win here. We knew we’d been strong here after testing. That was a perfect race, though David really kept me on my toes for the first 10 laps. As the track started gaining grip I gained confidence, especially after I saw David make that small mistake. The Andretti cars have been on rails for the past four weekends and we really had race pace today. I feel as though this should be our fifth win in a row, and to grab the points lead again after finishing 10th at Road America feels really good – everything’s clicking and I feel we’re back on a roll. We have some good weekends ahead of us.”

Danial Frost (#68 DEN-JET Andretti Autosport Dallara-AER IL-15): “We had a decent start and managed to get a gap from the guys behind, so it was just a matter of focusing forward. I did my best to get past Malukas but then he made a small mistake and I got the position. I’m quite happy. I think that was the maximum we could get today. The charge on Kyle was going to be difficult because we were already a distance behind him. But I’m starting on pole tomorrow and it’s hard to pass here so I think we have a good chance. But congratulations to Kyle on the win today.”

David Malukas (#79 HMD Trucking-HMD Motorsports Dallara-AER IL-15): “Everything has to go perfectly to get a pass done here and Kyle really made me push. Everything felt great but I went offline a bit through Four and Five, and into the high-speed Turn Nine. The rear just picked up a lot of dust and gave out. I had a big moment and I lifted and it never came back. Coming over the crest, all I was thinking about was trying not to hit the wall. It was unfortunate. I was sad but I recovered. I’m happy with P3 after all that, and we’ll go back now and see what we can do with the setup before tomorrow.”