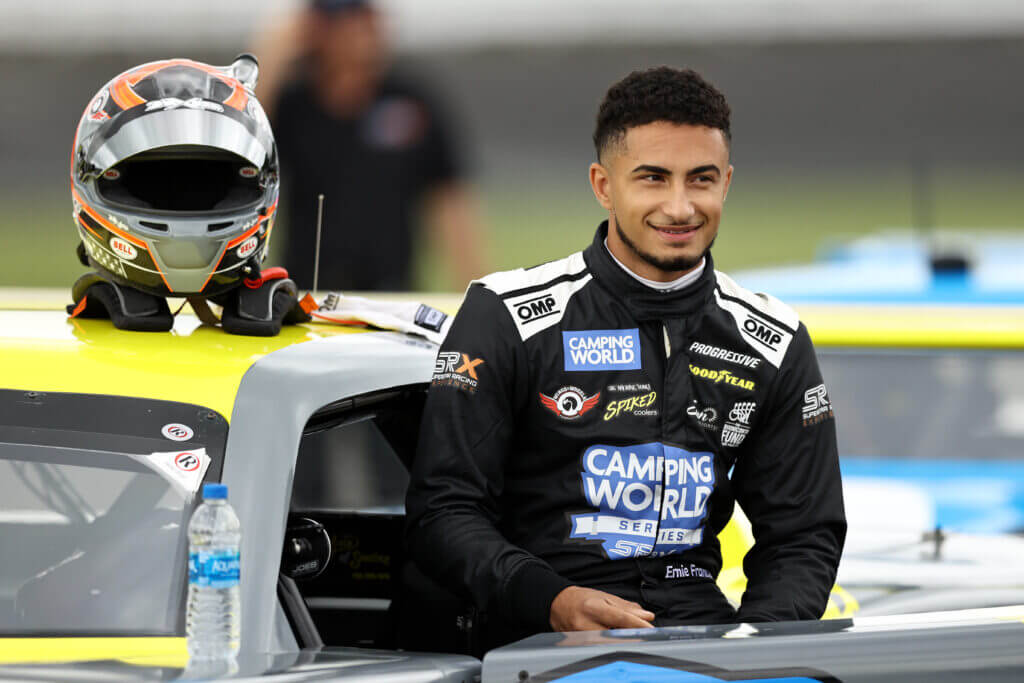 Francis, a seven-time Trans Am Series champion who won his first open-wheel race last Sunday in the Formula Regional Americas championship at the Mid-Ohio Sports Car Course in Lexington, led the final 65 laps in the 76-lap race around the .686-mile, paved oval near Indianapolis.

“Man, I’m totally speechless, this is incredible,” said Francis, who beat Labonte by .649 of a second. “Those last 10-15 laps felt like they were taking forever. It felt like an eternity out there, all the cautions. I was just trying to focus on a good restart.

“Me and Scott Speed went at it for a few laps there, side-to-side, and I didn’t know how that was going to end up. I ended up with a few donuts on the car, but man, couldn’t be happier with it, super incredible. I want to thank everybody from SRX, Ray Evernham and Tony Stewart for giving me this opportunity.”

“I was playing around with gearing trying to see what would work,” Francis said. “Second gear was spinning off of turn four as I tried to roll through third, and that last restart I got really sideways, but I stayed in it. I didn’t want to lift there. And I thought, man, when I saw that I cleared Labonte there – that was a good feeling knowing I just had to get through a few turns cleanly and I just ran my race and took it home. This is going to make that drive back to Road America a lot better.”

“All night, my car was really good,” Labonte said. “I got a little too tight at the end, and then Scott and Ernie got together and I was having to decide whether to go high or go low. I thought they were going to wreck, and then I was three-wide. Scott was sideways, somewhere, and we might have touched, and I got by him. We ran well from there. He was always dogging me off the bottom of (turn) four and he always seemed to be right there on my left rear. And then, that last green-white-checkered when it was just me and Ernie, my car was just too tight and I didn’t want to get into him too hard – just needed to keep it together and bring it home.”

Speed, the former Formula One driver who transitioned to NASCAR and then Rallycross, finished third after leading the first 11 laps.

“Man, we had such a good battle, me and Francis,” said Speed, who won the first heat race. “We were definitely the best two cars and we were playing cat-and-mouse with our tires, saving them. And then, with 10 to go, it was ‘game on.’ We were both going to charge and we had such an awesome side-by-side race. I just got a little bit too loose underneath him with a couple laps to go and fell back, lost a couple of spots. But it was a great race. I had so much fun.

“We came out of turn four and I got into Helio (Castroneves) a little bit. I didn’t do it on purpose. I’m having a good time here regardless of where I finish. But I’m happy for a guy like Ernie because for a kid like that, we’ve all had our careers in motor racing, but stuff like this can help him establish himself and that’s the big picture here.”

“I was happy after the heat races and we just tried something in the main,” said Stewart, who made his USAC Silver Crown debut at Lucas Oil Raceway on June 27, 1992. “I was tight in the center (of the corner) and was a little loose off and I didn’t figure we could fix the center, so we tried to fix the exit and tried something air pressure-wise and it did not work. It was a bad call on my part on what I thought the change needed to be and dialed myself right out.

“We’ve just got to stay focused from here. No matter how good the point lead seems right now, you can throw it away in two weeks and lose the thing. We’ve just got to throw this night out and go back and get ready for Slinger next week – a place I’ve never been to. I don’t think any of us have, actually. So we’ll just have to focus and try and do a better job than we did here.

“Ernie had a hell of a night. That kid has learned so much in such a short amount of time. He’s been one of the most consistent guys out there and, literally from the first night of practice on, he’s gained time and gained speed and gotten better and better. There’s a reason he’s here. He deserves to be here.”

Bobby Santos III was the local all-star at Lucas Oil Raceway who has racked up an impressive resume at the Indiana short track. The versatile Santos is a four-time winner of the A.J. Foyt Championship (2006, 2011, 2017 and 2020), which is awarded to the driver with the season-best points tally at Lucas Oil Raceway in USAC’s top-three series – Silver Crown, Sprint Car and Midget.

“It was fun. These guys are awesome. It’s a great group of drivers,” said Santos, who finished fifth. “I really appreciate what Ray and Tony and this whole group did to put this deal together and to allow a short-track racer to be involved. It’s an absolutely great opportunity, I just wish I did a little better job. I’m grateful for it and everything that these guys did was awesome.”

Taking it all in was Ray Evernham, the co-founder of the Camping World SRX Series.

“I always like to look at the race, but I don’t always get to see it from pit road, but I could tell by the fans’ reaction that they got what they wanted,” Evernham said. “Watching Ernie and Scott Speed and Bobby Labonte race like that was amazing. And then, all the way back in the pack, I saw the complete sides of cars coming down the front straightaway. Guys were so sideways and just working one another over.

“If it’s a good TV show and the fans love it, I’m happy. You look at these full grandstands and you look at the time people are having, I think the guys are getting some pretty good recognition on television but, more importantly, I think we’re bringing a lot back to grassroots racing, and that’s really important. If we can keep doing that, I’m going to be really happy.”

The penultimate event of the six-race short-track series is July 10 at Slinger (Wis.) Speedway. Joining the Camping World SRX Series regulars at the quarter-mile, high-banked asphalt oval 35 miles northwest of Milwaukee will be the winner of Tuesday’s night’s Slinger Nationals – a staple of short-track racing and a proving ground for the best of the best among Super Late Model drivers. Past winners include NASCAR Hall of Famers Alan Kulwicki (1981) and Mark Martin (1984) and NASCAR Cup Series champions Matt Kenseth (1994, 2002, 2006, 2008, 2009, 2012, 2016 and 2019) and Kyle Busch (2011).

Returning to the Camping World SRX Series at Slinger is Hailie Deegan. The 19-year-old racer from Temecula, California, finished second in her SRX debut June 19 at Knoxville (Iowa) Raceway. Deegan is a fulltime driver in the NASCAR Camping World Truck Series and a three-time winner in the NASCAR K&N Pro Series West, where she was the first female to win a race in that series.

Every Camping World SRX Series race is broadcast live at 8 p.m. EDT on the CBS Television Network with streaming live on Paramount+ Premium.

Camping World SRX Series Championship Standings (after Round 4 of 6):