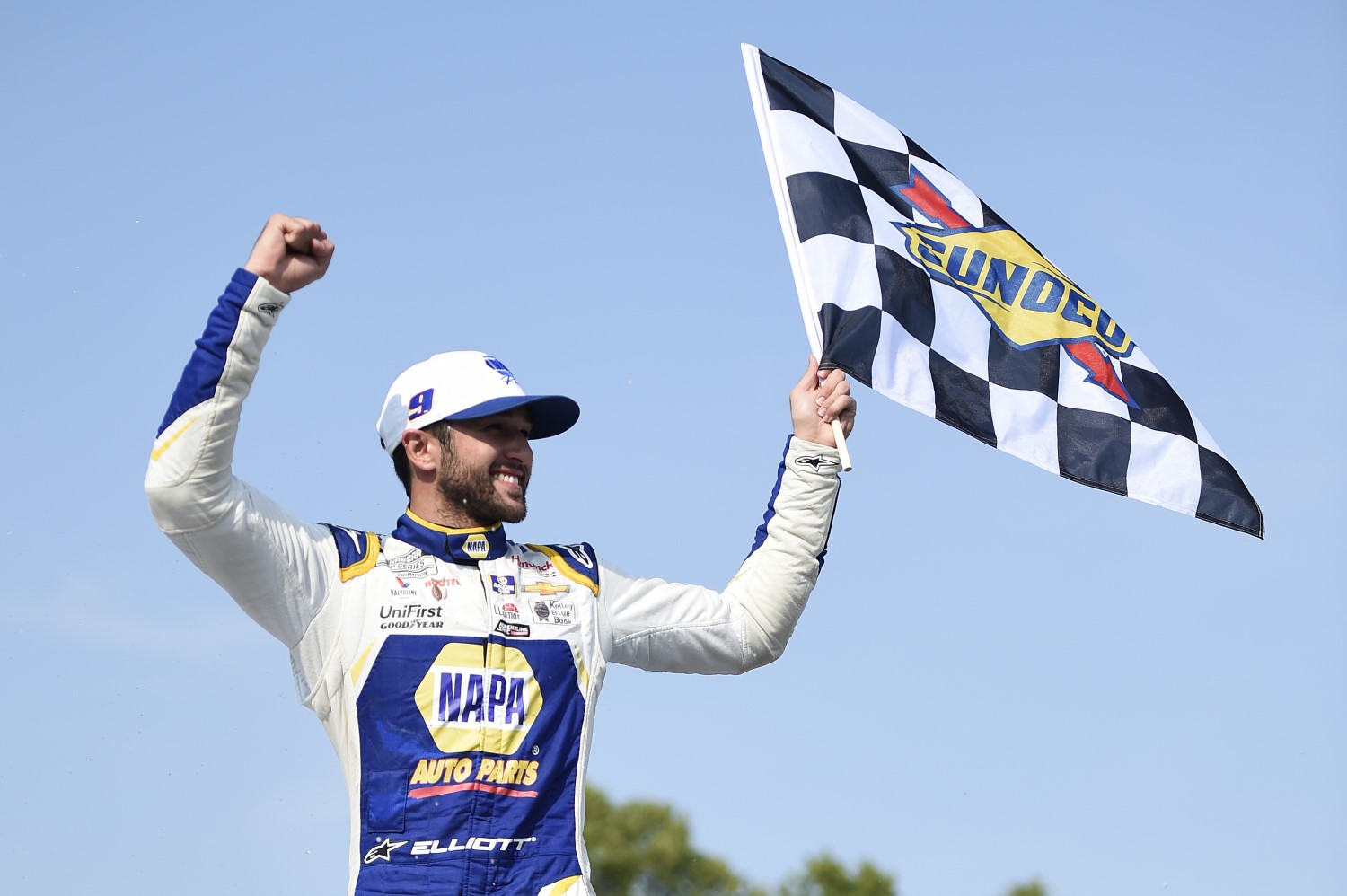 Kurt Busch and Denny Hamlin rounded out the top-5.

Kyle Larson was headed to a 4th place finish but his Hendrick Chevy Teammate Alex Bowman took him out when he ran out of talent in the hard braking  downhill Turn 5. He blamed his brakes.

Austin Cindric looked like he might win, but he spun while leading the race, ending his chances at earning his first career NASCAR Cup Series win.

The win was Elliott’s second of the season and the 13th of his career. Seven of those victories have come on road courses, including this year’s debut race at Circuit of the Americas in Austin, Texas. Elliott had to settle for second to teammate Kyle Larson in last month’s event at Sonoma Raceway.

Unable to complete a flying lap because of two ill-timed cautions during qualifying, Elliott started Sunday‘s race 34th in a field of 40. By the end of Stage 1, he was 10th, and by pitting three laps before the end of Stage 2, he positioned himself for a front-row restart for then final stage.

“Just really proud of our team for overcoming some adversity early and having to start in the back, having good pit stops,” said Elliott, who restarted fifth on Lap 46 after the final caution of the race for Anthony Alfredo’s spin into a gravel trap.

“Had a really fast NAPA Chevrolet. Just so proud. We’ve had a rough few weeks, so it feels really good.”

Less than a lap after that final restart, Elliott pulled alongside Busch entering the Kink (Turn 11) on the backstretch and cleared him through Turn 12. Sixteen laps later, Elliott finished 5.705 seconds ahead of runner-up Christopher Bell, who passed Busch for the second position on Lap 58.

Elliott, who clinched a spot in the Cup Series Playoff with the win, finally got a feel for the mammoth road course after frustrating practice and qualifying sessions.

“Yeah, I never felt like I got in a real good rhythm all of yesterday (in practice),” Elliott said. “For whatever reason there, after about halfway through the race, I started finding some of that rhythm, was able to put it together, piece different parts of the track.

“Finally I felt like I was able to piece most of it together. Yeah, stayed with it and glad it worked out.”

Hendrick Motorsports has won 10 of 20 races this season and seven of the last eight. Elliott has the most road course victories among active drivers, is third all-time behind Jeff Gordon (nine wins) and Tony Stewart (eight) and has won at more different road courses (five) than any other driver in Cup history.

Bell overcame a tail-end-of-the-field penalty for driving through more than three pit boxes on Lap 15.

“Here the last couple weeks, I’ve been really proud of the progress we’ve made,” said Bell, who picked up his first Cup win in the second race of the season at the Daytona Road Course. “I’m just proud to drive for everybody on this 20 group at Joe Gibbs Racing.

“Excited for the future. I know there’s more to come. Like I said, there’s no reason why we can’t run up front every week.”

Kyle Busch started from the rear of the field and finished third in a backup car after wrecking his primary No. 18 Joe Gibbs Racing Toyota in the Kink during Saturday’s practice.

For the second straight day Austin Cindric had an excellent run spoiled by unfortunate circumstances.

Cindric, who qualified fifth, had just retaken the lead from Matt DiBenedetto on Lap 24 when a mechanical issue thwarted his hopes for a maiden Cup victory. Cindric ran wide in Turn 5 with a broken axle and spun shortly thereafter.

“I only had one-wheel drive, and when you only have two other ones spinning with 750 horsepower, it’s a bit challenging,” said Cindric, who salvaged an eighth-place finish in Saturday’s NASCAR Xfinity Series race after a late chain-reaction wreck. “It was quite dramatic taking the lead and then immediately losing everything. Not a weekend I’m necessarily happy about.”

Pole winner William Byron led the first 15 laps and won Stage 1 but finished 33rd after spinning off course in the final stage. Reddick earned the Playoff point for winning Stage 2 after Elliott, Kyle Busch and Truex made strategic pit stops ahead of him.

CHASE, WHAT AN INCREDIBLE DRIVE FROM 32ND TO THE WIN. I LOVE THAT VICTORY CELEBRATION. YOU WANTED TO SEE EVERYBODY HERE AND THANK THEM FOR A TERRIFIC TAKE.

“Absolutely, I wasn’t going to miss anybody. I appreciate y’all coming out. Thank you for spending your 4th of July with us. I hope you enjoyed the show. Man, it was a hot day. But a lot of fun, man.”

“Just really proud of our team for overcoming some adversity early and having to start in the back, having good pit stops. Had a really fast NAPA Chevrolet. Just so proud.”

“We’ve had a rough few weeks, so it feels really good. I guess I was supposed to do a burnout here, I’m sorry. I missed the memo. I did a really cool one on the front stretch. Thanks, everybody, for coming out. Happy 4th. Y’all have a safe weekend. Thanks for coming out.”

AREN’T YOU THE SAME GUY THIS MORNING THAT TOLD ME, I HAVE A LOT TO FIGURE OUT ABOUT THIS RACETRACK. HOW DID YOU FIGURE IT OUT SO QUICKLY?

“Yeah, I never felt like I got in a real good rhythm all of yesterday. For whatever reason there, after about halfway through the race, I started finding some of that rhythm, was able to put it together, piece different parts of the track. Finally, I felt like I was able to piece most of it together.”

“Yeah, stayed with it and glad it worked out.”

TALK ABOUT THE CHALLENGE OF THIS DAY, THE HEAT AND A NEW RACETRACK FOR EVERYONE. THAT WAS A LOT TO FIGURE OUT.

“Yeah, it’s just this track has a lot of character to it. It’s so long. You have a lot of opportunity to make mistakes or be good whenever you hit it.”

“I mean, four miles is a long course. Just has a lot of character to it, a lot of bumps, a lot of sections that are really tricky to get through. I think conserving your tire was actually a little bit of a thing today, which to be honest we don’t have much of that I feel like any more.”

“It was a little different race. Like I said, proud of our group. Most importantly, thanks everybody for coming out. Thanks to our partners, everybody back at Hendrick Motorsports. Been doing a phenomenal job. Bodies, chassis, engines, fab shops. It’s just been incredible. Looking forward to more.”