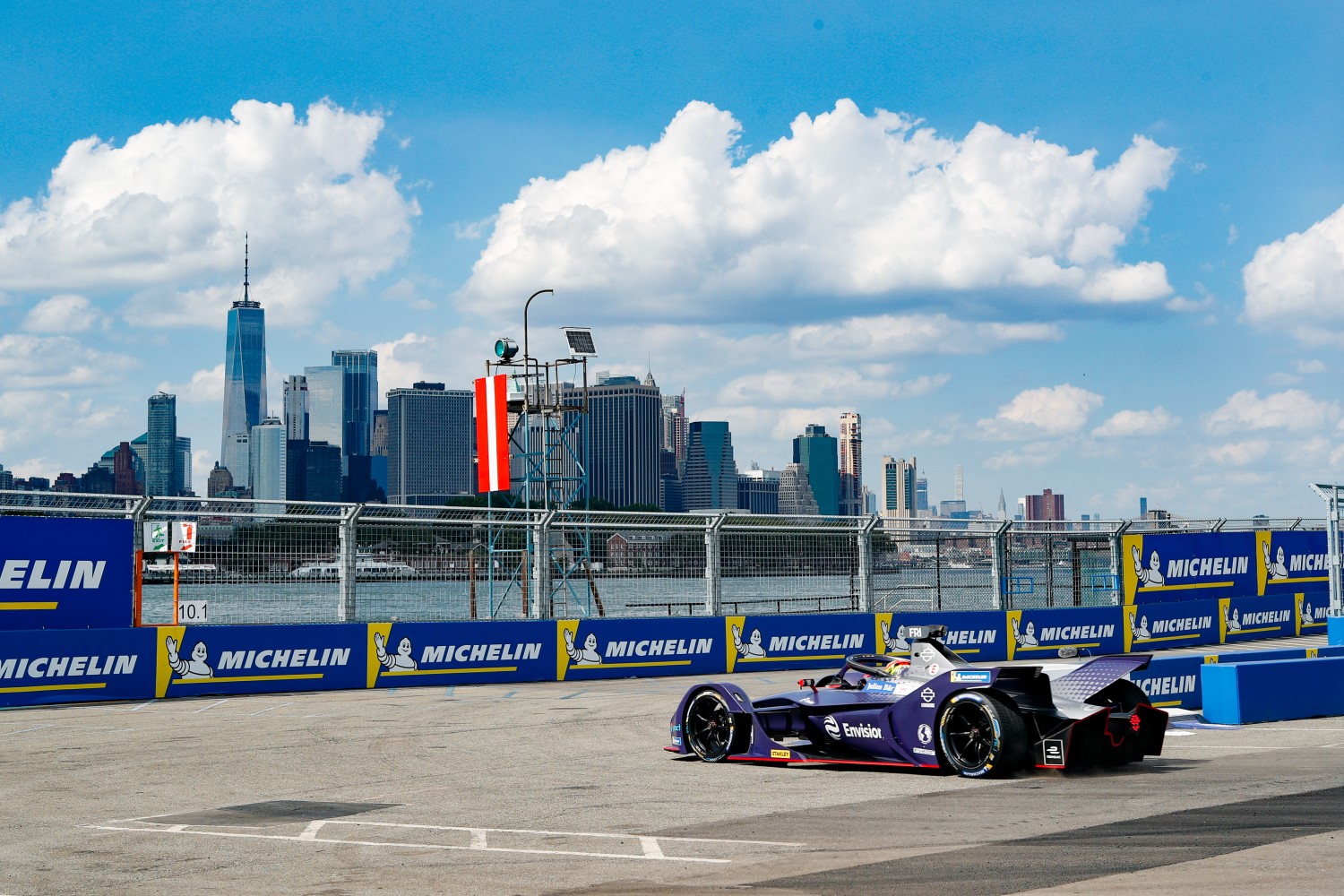 The skyscrapers of Manhattan form the breathtaking backdrop for the guest appearance of the ABB FIA Formula E World Championship in New York City. Races 10 and 11 of the world’s first electric racing series will be contested in the streets of Brooklyn on 10 and 11 July. At another season highlight in the Big Apple, the TAG Heuer Porsche Formula E Team fields two Porsche 99X Electric for Pascal Wehrlein (GER/No. 99) and André Lotterer (GER/No. 36). In the USA, the squad from Weissach aims to achieve the victory that was very close in Mexico: Pascal Wehrlein was first across the line in Puebla, however a disqualification prevented him from claiming his well-deserved reward.

Now, the TAG Heuer Porsche Formula E Team is eager to turn this disappointment into positive energy at the New York City E-Prix. “We’ll be particularly motivated when we line up for the race through the streets of New York and even stronger than in Puebla,” says Amiel Lindesay, Head of Operations Formula E. “We’re perfectly prepared for the event and we want to finally score our first victory.”

Amiel Lindesay, Head of Operations Formula E
The team delivered its best performance so far in Mexico, only to go home empty-handed. How do you all cope with that?
“We left Puebla with the knowledge that we can lead a race from start to finish and win it. This gives us a great deal of positive energy and even more motivation to remain on this steady course together. After setting pole position for race 8, we not only underlined that we can stay at the front, but that we’re efficient as well.”

The New York City E-Prix is again new territory for you. What expectations do you have as you head to New York?
“Yes, the New York City E-Prix is new for the team, but André and Pascal have actually raced there before. Their experiences play a key role in our preparations. Although the track is new for us, we’re very confident that we’ll pick up in the US where we left off in Mexico.”

Pascal Wehrlein, Porsche works driver (#99)
After your strong performance in Puebla, where would you be in the rankings without the disqualification in the first race and the time penalty in the second race?
“At the top. We all did a super job in Puebla and we deserved that first victory. But no matter how big the disappointment was at first, we have to keep working hard and try to make the most of the next opportunities. We’ve taken a good look at what happened in Puebla but now we’re focussing on New York. We’ll do everything to again get the best out of ourselves and our package. If we manage this, we’ll definitely be as strong as we were in Puebla. The racetrack is new turf for the team but I’ve already competed there. It’s a typical city circuit, very narrow with walls on either side of you. I love such Formula E racetracks.”

André Lotterer, Porsche works driver (#36)
What are you taking from Puebla to New York, how are you feeling and what are your expectations?
“It’s a great location and a great track – so I’m very excited for New York. Puebla wasn’t an easy weekend for me. I struggled in race 8 without really knowing what was going on. I was going well in race 9 until I picked up the advertising banner. We certainly collected a lot of data, we looked at what we did right and what wasn’t good. We then implemented what we learned to prepare for New York. I’m confident that things will be better again for me there. The team supports me and is incredibly focussed. At some point, it simply has to work.”

The racetrack
Twenty-four drivers will again battle for prestigious victories on a typical Formula E circuit at the New York City E-Prix. The 2.320-kilometer Red Hook Circuit around the Brooklyn Cruise Terminal with a view to Lower Manhattan and the Statue of Liberty is lined with walls that are unforgiving of the slightest mistake. The course’s 14 corners range from a hairpin (turn 10) over a chicane (turn 6) to the high-speed kink (turn 14) leading onto the start-finish straight which competitors tackle at around 140 km/h. The weather can play a key role: from 35 degrees Celsius to torrential rain, anything is possible at this time of year. “In New York, we’re finally returning to the real city circuit feeling,” says André Lotterer with a smile. “The racetrack is bit bumpy so you need a good chassis. It should suit our car.” Pascal Wehrlein adds: “It’ll be important to start from the front of the grid and make it through the first lap safely because the course is very narrow in places.” The Mercedes-EQ Formula E Team is heading to New York City for the sixth race weekend of the 2020/21 ABB FIA Formula E World Championship. While the team will be contesting an E-Prix on the streets of New York for the first time, this will be the fourth appearance in Brooklyn, New York City, for the all-electric racing series.

Three double headers have taken place in New York City since its debut in Season 3 (2016/17) and there have been five different winners in the six Formula E races held there so far. The New York City E-Prix was cancelled in 2020 because of the worldwide pandemic, but Formula E will be returning to the United States of America later this week.

While the 2.32km street circuit may be new to Nyck de Vries, Stoffel Vandoorne is already familiar with it from the finale to Season 5. The track runs through the district of Red Hook, has 14 turns and is relatively unchanged since the last E-Prix in 2019. What is new, though, is where the activation zone for Attack Mode is now positioned. It has been relocated this year from the exit at Turn 5 to the outside of Turn 10. This may sound like a minor detail, but optimizing Attack Mode has proven to be crucial at previous races this season.

Once again, the New York City E-Prix will be a double header with one race taking place on Saturday and then another on Sunday. Saturday’s first race will get underway at 21:34 BST while Round 2 will kick off at 18:34 BST on Sunday.

Comments ahead of the New York City E-Prix 2021

Ian James, Team Principal:
“I’m excited to see the New York E-Prix back on the calendar for the first time since 2019. New York is one of the locations that reminds you what Formula E is all about: bringing exciting events to the biggest and most relevant cities around the globe. The global situation last year meant we couldn’t visit the cities we’d ideally wanted to and seeing us return to New York this weekend does give a sense of what is to come – albeit a visit under still slightly restricted circumstances. This will be the first race for the Mercedes-EQ Formula E Team in New York. That is challenging, but also very exciting. We have now passed the halfway point in the season. With the knowledge of how close the field is, and how little difference there is in points in both the team’ and drivers’ championship standings, the coming weeks and months are going to be crucial. Apart from being as clean as we can be in our delivery, we also need to realize how unique the challenge is we are facing, and how special an opportunity we have to fight for a championship with this amazing team.

After the Puebla E-Prix, I said the result mostly hurt knowing we had the potential to do better. Those words weren’t empty; they were echoed by the whole team. We know our potential and have delivered on that potential on several occasions already this season. That knowledge hurts, but most of all, it keeps us motivated to keep doing what we do, and keep fighting for all the championship points we can possibly score in the last three events of the season.”

Nyck de Vries:
“In all honesty, in a championship like Formula E it’s very difficult to have any expectations heading into a race weekend, as the field is so evenly matched and is always good for a surprise or two. Of course, I’m really looking forward to going racing again. We were competitive during the last race weekend in Mexico and had a strong package, so I hope that this New York weekend will favor us more, that we’ll be able to deliver two strong races and come away with a good haul of points. I feel very positive about the race weekend and am really looking forward to it.”

Stoffel Vandoorne:
“I’m really pleased to be heading back to New York. It’s been a while since we last raced there. Last time was in Season 5, but I can still remember having a good qualifying and race. New York is a typical Formula E circuit, very winding, extremely narrow and the walls are very close, so quite different to last time out at Puebla, but still, I think it may be one that suits us more. I’ll be in Group 2 for qualifying on Saturday, which, I hope, will give me a little bit of an advantage. In any case, I’m excited to be back out on track. We’ve shown that we’ve got a competitive car and package. We’ll be contenders if we can put all the pieces together. As you would expect, the target is to try and score as many points as possible in New York this weekend.”