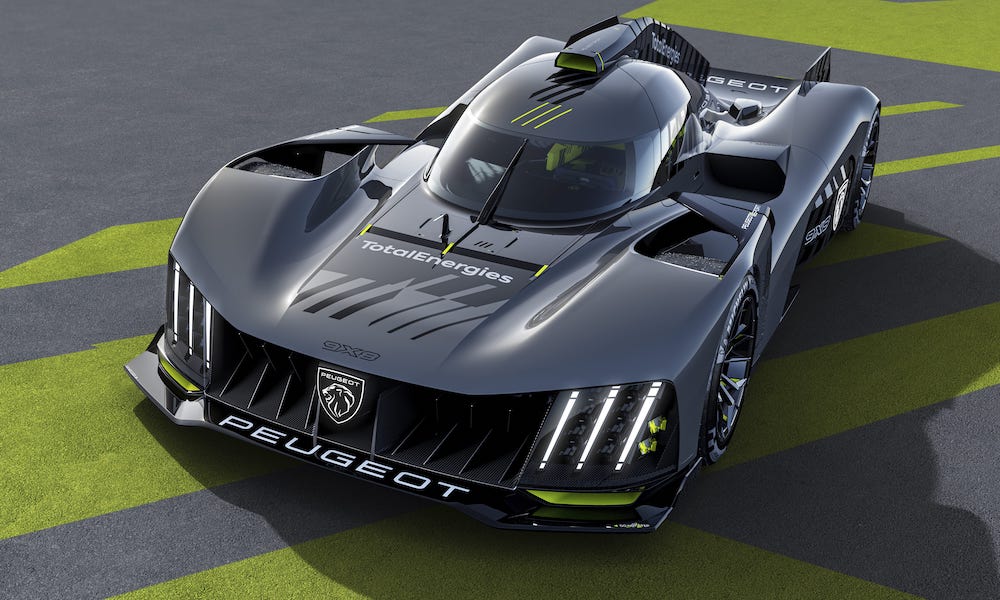 Peugeot has unveiled its ‘9X8’ hybrid-powered Le Mans Hypercar that will compete in the FIA World Endurance Championship and the 24 Hours of Le Mans from next year.

The French manufacturer revealed its hybrid-powered sports prototype on Tuesday, in a presentation at its motorsport headquarters at Versailles-Satory.

Powered by a hybrid power unit which drives through all-wheel drive transmission, this hyper-efficient prototype fits perfectly with Peugeot’s Neo-Performance strategy which is geared to both its road and racing cars delivering responsible performance.

The work of Peugeot Sport’s engineering team and Peugeot Design dovetailed like never before to produce the 9X8 which heralds a new era in motor racing due to its flowing lines, the absence of a rear wing and the strong brand identity it exudes. The innovative technical solutions it packs and its catlike stance stand out as unmistakable Peugeot hallmarks.

The new prototype is poised to continue the make’s long and successful involvement in world-class motorsport with highly competitive cars that feature strong, instantly-recognizable brand identity.

Peugeot 9X8’s forms and aerodynamic characteristics are similarly the fruit of the pooled input of the development engineers working under the responsibility of Peugeot Sport Technical Director Olivier Jansonnie and the design team led by Peugeot Design Direction Director Matthias Hossann.

Their approach was governed by the regulations drawn up by the FIA (Federation Internationale de l’Automobile) and ACO (Automobile Club de l’Ouest) for new the Le Mans Hypercar (LMH) class which succeeds from endurance racing’s former LMP1 headlining category. The greater flexibility allowed by the sport’s new technical rules regarding aerodynamics permits radical new thinking that favors the emergence of innovative cars, with scope for the design teams to make an even bigger contribution.

Peugeot’s engineers and designers effectively took advantage of this opportunity to invent new creative processes and break away from established codes to produce a Hypercar of a completely new genre.

The name of Peugeot’s new Hypercar challenger is the Peugeot 9X8. The “9” continues the series employed by the manufacturer for its recent topflight endurance racing cars, namely the Peugeot 905 (which raced from 1990 until 1993) and the 908 (2007 until 2011), both of which became icons of the brand.

The “X” refers to the Peugeot Hypercar’s all-wheel drive technology and hybrid powertrain which embodies the brand’s electrification strategy in the world of motor racing.

The “8” is the suffix used for all of Peugeot’s current model names, from the 208 and 2008, to the 308, 3008, 5008 and, of course, the 508 which very recently passed through the hands of the engineers and designers who crafted the Hypercar to become the first car to sport the Peugeot Sport Engineered label.