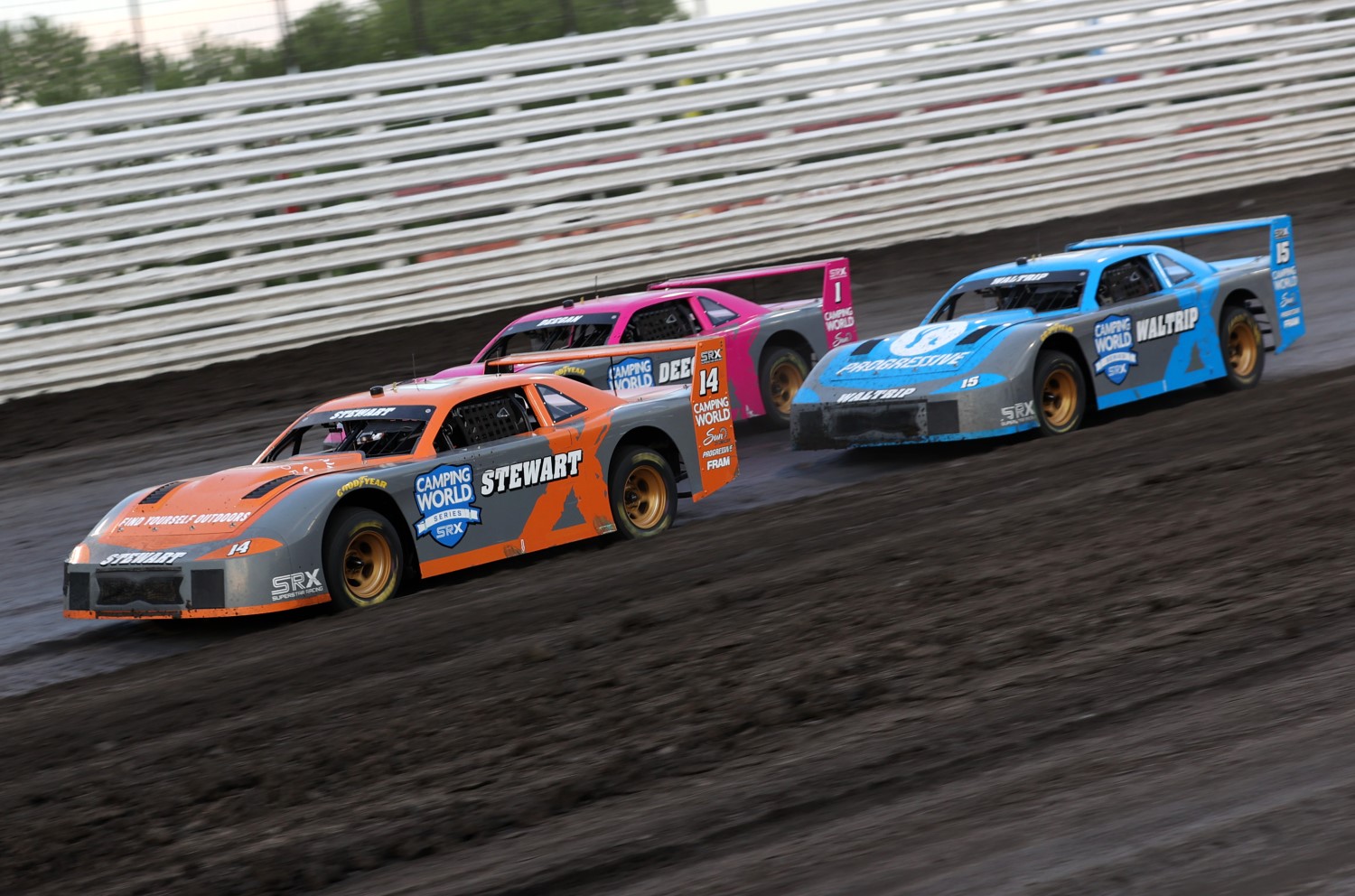 DRIVER CHAMPIONSHIP STANDINGS: After Round 4 of 6

CREW CHIEF CHAMPIONSHIP STANDINGS: After Round 4 of 6

● Won the 42nd running of the Slinger Nationals on Tuesday night to earn entry into Camping World SRX Series race at Slinger.

● At 17 years old, is the youngest winner in the history of the Slinger Nationals.

● Currently second in the ARCA Midwest Tour championship standings, but is skipping the upcoming Wayne Carter Classic 100 at Grundy County Speedway in Morris, Illinois, to compete in the Camping World SRX Series race at Slinger.

● Won 2018 State Park Speedway track championship and rookie-of-the-year title at the age of 14, his first year in Super Late Models. Won five races and had an average finish of 3.25.

● Also competed fulltime in the Midwest Truck Series in 2018, picking up four wins and finishing second in points while earning rookie-of-the-year honors.

● Began racing in the Midwest Truck Series in 2017. Despite being able to compete in only eight of the 18 races due to the series’ age restriction, earned two poles and won two races

● Began racing snowmobiles at age 4. From there, started racing go karts at age 7 and then competed in the Bandolero Series from ages 9-12.

● Is a rising senior at Wausau East High School.

● Biffle competed in the SRX season opener June 12 at Stafford. He won the first heat, finished last in the second heat, and finished second in the feature race to winner Doug Coby. Slinger marks his second SRX race.

● Winner of 19 NASCAR Cup Series races and finished second in points in 2005.

● Competes in the six-race Sand Outlaw Series and builds many of the side-by-sides and off-road cars that compete in the series.

● Owns a fully operational mine and rock quarry in Virginia, operates heavy equipment there, and is also a real estate investor, oftentimes doing his own repair work on properties.

● Substituted for Tony Kannan June 19 at Knoxville. She finished third in the first heat, finished fifth in the second heat, and finished second in the feature race to winner Tony Stewart. Slinger marks Deegan’s second SRX race, as Kanaan has schedule conflicts that prevented him from competing at Knoxville and Slinger.

● Three-time winner in the NASCAR K&N Pro Series West, and was the first female to win a race in the series.

● Winner of the 2006 INDYCAR Series Rookie of the Year.

● Prepared to run the 2020 New York Marathon before the COVID-19 pandemic forced cancellation of the event.

● Winner of the 2021 Rolex 24 at Daytona with co-drivers Filipe Albuquerque, Ricky Taylor and Alexander Rossi.

● Credited with beginning the tradition of climbing the fence after a race win, which he did after scoring his first career INDYCAR victory at the 2000 Detroit Grand Prix.

● Mirror Ball Trophy winner on Season 5 of Dancing With The Stars in 2007, alongside partner Julianne Hough.

● Voted NASCAR’s Most Popular Driver by fans a record 16 times.

● Won the fourth round of the Camping World SRX Series race July 3 at Lucas Oil Raceway. It was Francis’ first career win on an oval.

● Winningest driver in the 55-year history of the SCCA Trans Am Series, all while being just 23 years old.

● At 16, became the youngest champion in Trans Am history and is the youngest professional driver to win seven consecutive championships.

● One of his most impressive performances came in the 2018 Trans Am race at the Indianapolis Motor Speedway road course. He had to miss qualifying because of a NASCAR commitment, but still won the race from the back of the grid.

● Has made select starts in the NASCAR Xfinity Series and NASCAR K&N Series.

● Counts Willy T. Ribbs as a mentor and, like Ribbs, making a name for himself in Trans Am.

● Lebanese ancestry but grew up in Brazil; member of racing “Brat Pack” with Dario Franchitti, Max Papis and the late Greg Moore.

● Avid triathlete and has completed Ironman event in Hawaii.

● Won 2001 International Race of Champions (IROC) title, which was the precursor to SRX.

● Is a television analyst for FOX, specifically FS1’s RaceDay.

● Owns a Red Mango yogurt shop on the campus of Duke University.

● Winner of the 1977 Dunlop/Autosport Star of Tomorrow Formula Ford 1600 championship.

● A 17-race winner in the SCCA Trans Am Series. Was the 1983 Trans Am Rookie of the Year on the strength of five wins and finished second in the series championship to teammate David Hobbs.

● In the Disney Channel cartoon The Proud Family, character Penny proud and her friends attend Willy T. Ribbs Middle School, where the mascot is “Racer.”

● Ribbs was the subject of the 2020 Netflix documentary, Uppity: The Willy T. Ribbs Story.

● Stewart is the first and only driver to win championships in stock cars, Indy cars and open-wheel Midget, Sprint and Silver Crown cars.

● Owner of Tony Stewart Racing, winner of 26 championships – 14 in USAC, nine in the World of Outlaws Sprint Car Series and three in the All Star Circuit of Champions TQ Midgets.

● Formed the Tony Stewart Foundation in 2003.The 501(c)(3) organization’s goal is to raise funds primarily distributed to serving three specific groups – chronically ill and physically disabled children, animals that are endangered or at-risk, and drivers injured in the sport of motor racing. To date, the Foundation has awarded nearly $7 million to assist charitable initiatives for more than 150 well-qualified organizations throughout the United States.

● Finished second to Helio Castroneves in the 2002 Indianapolis 500.

● Author of a New York Times best-seller in 2011, In the Blink of an Eye: Dale, Daytona, and the Day that Changed Everything. A documentary film adaptation was released in 2019.

● An avid runner, competed in the 2000 Boston Marathon.

The Camping World SRX Series was created by a team consisting of Sandy Montag and The Montag Group, George Pyne, NASCAR Hall of Fame crew chief and team owner Ray Evernham, and legendary driver Tony Stewart. The Montag Group leads business operations and Evernham oversees all racing operations. Pyne is a member of the Board and serves as an advisor. For more information, please visit us online at www.SRXracing.com, on Facebook, on Twitter and on Instagram.