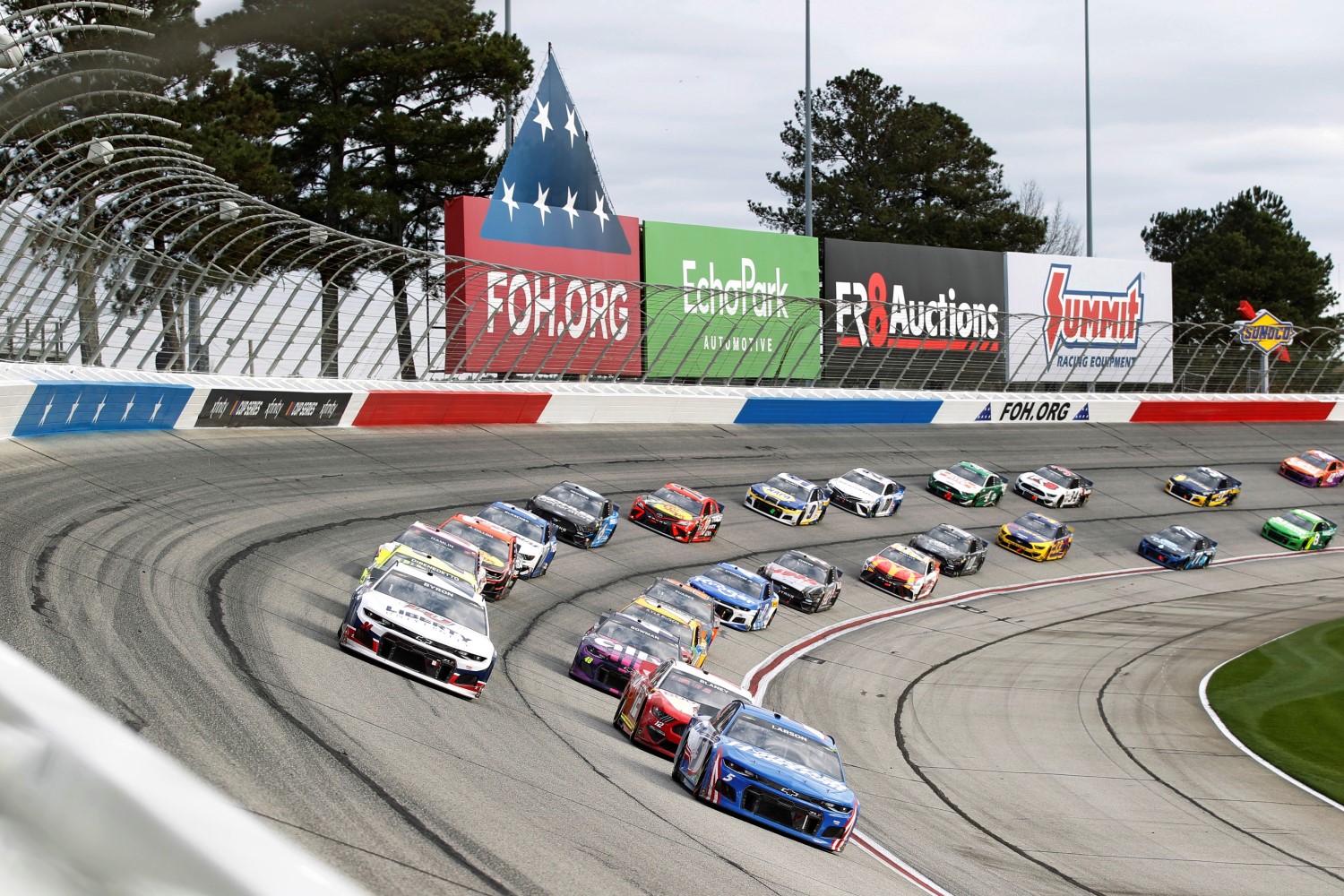 As the NASCAR Cup Series begins its series of “second” stops at many tracks, the championship push has a distinctively different feel. Sunday’s Quaker State 400 presented by Walmart (3:30 p.m. ET on NBCSN, PRN, SiriusXM NASCAR Radio) will undoubtedly help firm-up the haves, and have-nots with six races left to set the 16-driver Playoff field.

The Georgia-native Elliott heads to his “home track” this week with a second trophy, thanks to his work at Road America in Elkhart Lake, Wisc., last weekend. The driver of the No. 9 Hendrick Motorsports Chevrolet is winless in six tries at Atlanta, however, and finished an especially disappointing 38th this March – his car suffering engine problems.

His teammate Larson finished runner-up to Team Penske’s Ryan Blaney at Atlanta in March – after leading a dominant 269 of the 325 laps. Since that win for Blaney, all three Penske drivers – Joey Logano, and Brad Keselowski – have hoisted a trophy, but none since Keselowski’s victory at Talladega, Ala. back on April 25.

Keselowski, driver of the No. 2 Team Penske Ford, is statistically one of the best at Atlanta – which announced this week a new re-pave, and renovation is coming for its 1.5-mile speedway. Keselowski has two wins – earning one in 2017, and the other in 2019. A good result on Sunday would right a wobbling path toward the Playoffs. He’s scored only two top-10 finishes in the season’s last nine races, and was 28th in Atlanta this Spring.

Blaney, who drives the No. 12 Team Penske Ford, has only six top-10 finishes in the 14 races since his Atlanta win, none at 1.5-mile tracks during that time. His only top five was fifth at Pocono two weeks ago.

Logano, driver of the No. 22 Team Penske Ford, has only a single top 10 in the five races at 1.5-mile tracks this year – a ninth-place run at Las Vegas in the third race of the season. He’s never won at Atlanta, and has only five top-10 finishes in 15 previous races there.

Judging solely off past performance, Atlanta should be a place Kevin Harvick feels extremely optimistic. The 2014 NASCAR Cup Series champion won a series high nine races last year but has yet to hoist a trophy this season.

Certainly, Atlanta is a special place for the driver of the No. 4 Stewart-Haas Racing Ford. Harvick scored a dramatic first career NASCAR Cup Series win there in 2001 only three races after taking over the Richard Childress Racing Chevrolet after Dale Earnhardt passed away in the Daytona 500. He has since added two more wins.

In all, Harvick has 16 top-10, and nine top-five finishes in 31 starts, and his series best 1,348 laps at Atlanta is an amazing 500 laps more than any other driver. Add to that success, five Xfinity Series wins too.

“We’re 100 percent bought into the feel in the race car at Atlanta, and we’re going to chase that feel, and what we want because we know that it’s just different than everywhere else that we go to,” Harvick said. “You’re looking for a different reaction out of the car that allows you to be able to run fast for a long time.

“It’s a different type of racetrack, but in the end, those guys are bought into knowing that if we don’t win at Atlanta, it’s a letdown because of the [high] expectations we have going in there.”

As with Harvick, another of last year’s dominant drivers, Joe Gibbs Racing’s Denny Hamlin is still looking for this first win of 2021. Although he’s yet to celebrate in Victory Lane, Hamlin’s work in the No. 11 JGR Toyota – 14 top-10, and 11 top-five finishes – has kept him atop the championship standings. He’d prefer to be there with a trophy to his name, however.

Hamlin has nine top-10 finishes in 22 Atlanta starts with a win there in 2012. He’s earned three top-10 finishes in five starts at 1.5-mile tracks this year, and with five finishes of second or third, it has long felt like Hamlin is due for a win.  He’s been top five in the last four Atlanta races.

Justin Allgaier is hoping for an Atlanta season sweep. He beat NASCAR Cup Series regular Martin Truex Jr. in March for the Atlanta victory, and has been among the hottest full-time Xfinity Series drivers of late, finishing in the top-five in three of the last four races – including runner-up work at both Texas, and Nashville. The 1.5-mile Atlanta track has been particularly good for the driver of the No. 7 JR Motorsports Chevrolet. He has seven top-10 finishes in 11 career starts, including the last four races there.

Allgaier’s JRM teammate Noah Gragson is another driver with a good history at Atlanta. He’s had an inconsistent year with a series high six DNFs, but Gragson has never finished outside the top-10 in three Atlanta starts, including a runner-up finish in 2020, and fourth place this March.

The driver of the No. 9 JR Motorsports Chevrolet has yet to win a race this season, but, has answered an uncharacteristic streak of three DNFs with four top-10 finishes in the last four races. He sits 10th in the championship standings with nine races remaining to set the 12-driver Playoff field.

Team Penske’s Austin Cindric leads all full-time series drivers with four wins in 2021, but has two finishes outside the top-10 in the last four races. Although Cindric has not won previously at Atlanta – his best finish is seventh in 2018 – he has been particularly strong at 1.5-mile tracks, where he has four top-five finishes this season. The driver of the No. 22 Team Penske Ford has led laps in 16 of the 17 races to date. His 534 laps out front nearly 200 more than the next best total (Daniel Hemric’s 345).

These drivers expect good competition this weekend from Kaulig Racing’s A.J. Allmendinger, who sits second to Cindric, in the championship. Allmendinger earned his first career NASCAR oval victory at Atlanta last year, and shows up this week with seven top-six finishes in the last eight races, including a win at Mid-Ohio. In two Atlanta starts he has a win (2020), and a fifth place (2021).

Of course, the biggest challenge on the grid for full-time series drivers this weekend is Kyle Busch, who has literally been perfect this season in the Xfinity Series winning all four races he’s competed in. This weekend marks the last Xfinity start for the two-time NASCAR Cup Series champion, and he’d love to tie up his 2021 work with a victory circle ending.  He won his last two Xfinity Series starts at Atlanta – in 2016, and 2017 –, and has five more runner-up showings in 13 career Xfinity races at the track. Three times he’s led at least 100 laps.

Racing on dirt isn’t necessarily new to the Truck Series, which competed at Bristol this Spring, and held seven races on the famed Eldora (Ohio) Raceway from 2013-19. This week’s new venue – renowned as the “Sprint Car Capital of the World”, and host of the summer’s Knoxville Nationals – creates a fresh challenge for the Truck Series drivers, and has definitely become a popular venture as far as fans are concerned.

Nemechek, 23, arrives in Knoxville riding a career year in NASCAR competition. He won the last truck race – two weeks ago in Pocono, Pa. – to top his series best five victory total. He’s won three of the last four races (at Charlotte, Texas, and Pocono), has led laps in 11 of the season’s 13 races, and his 485 total laps out front is double that of any other full-time series competitor. Nemechek has a series high eight top-five, and 11 top-10 finishes in the No. 4 Kyle Busch Motorsports Toyota.

As Rhodes, 24, showed at Bristol this Spring, he is up for the dirt challenge, however. The driver of the No. 99 ThorSport Toyota has kept Nemechek honest in the championship standings all season – winning the opening two races, and adding that runner-up at Bristol.

Interestingly, he’s earned 10 top-10 finishes, but led only 74 total laps in 13 races – only 11 laps in the last five races. Certainly, Rhodes would like to re-establish some consistency heading into the Playoffs. In the last four races, he has two top-10 finishes, and two finishes 17th or worse.

Gilliland, driver of the No. 38 Front Row Motorsports Ford is another driver to watch at Knoxville. He didn’t lead a lap the first seven races of the season, but the team has obviously switched into gear, and he’s led laps in five of the last six. In fact, Gilliland has been particularly effective on the new venues – winning at COTA, finishing fourth on the Bristol dirt, and finishing runner-up at Nashville.

He’s third in the championship, and one of only four full-time drivers with a victory to ensure his place in the championship Playoffs. With two races remaining in the regular season, Chandler Smith holds a 31-point advantage over former series champion Johnny Sauter for that final 10th place Playoff transfer position. Tyler Ankrum is 33 points behind Smith. by Holly Cain/NASCAR