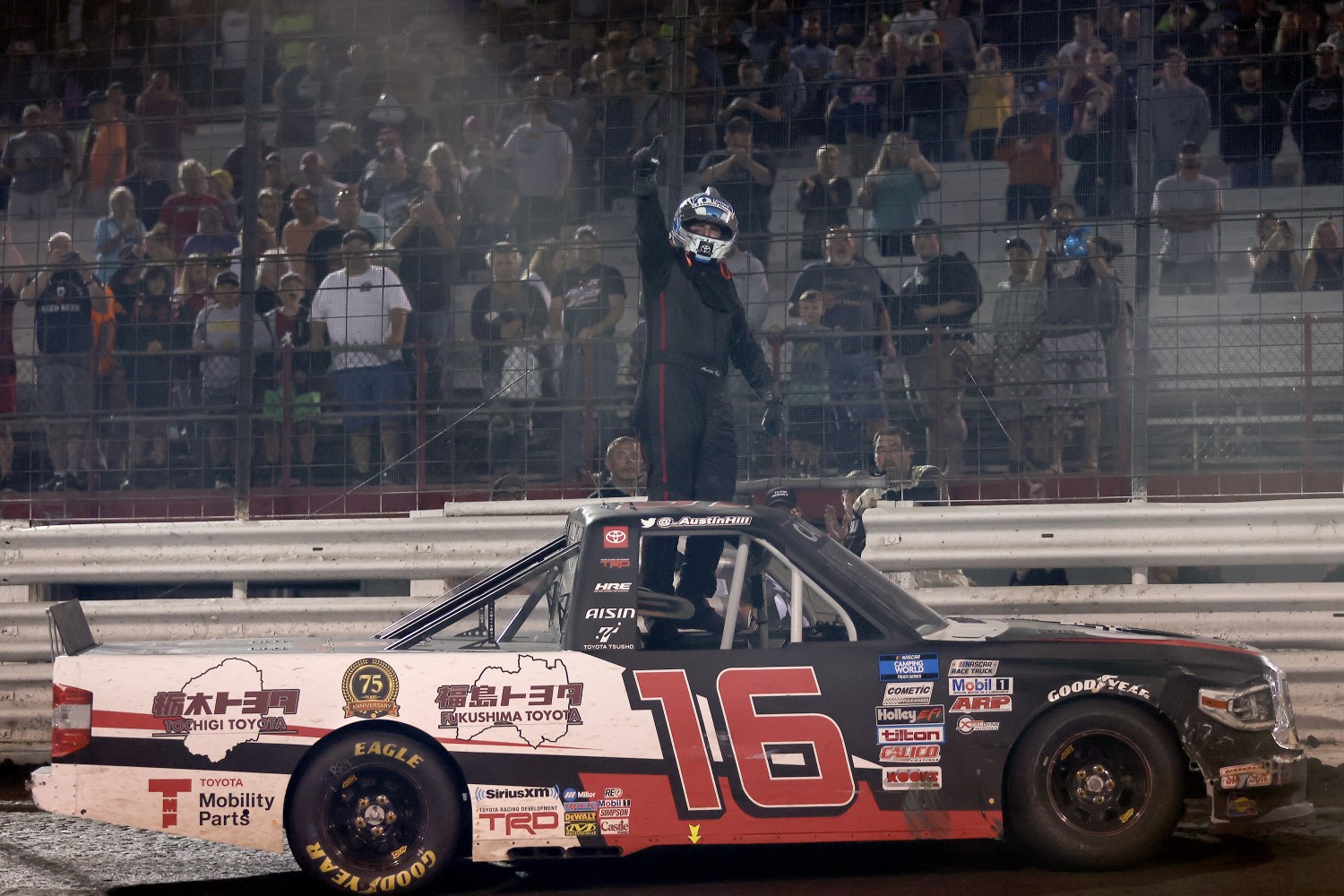 Taking the lead on a late-race restart, Hill sped away from Chandler Smith and Grant Enfinger as they battled for second place. Smith finished runner-up, while Enfinger slotted in third. Todd Gilliland and Derek Kraus rounded out the top five.

Kraus, the pole winner, went on to dominate Stage 1 and Stage 2 and led the most laps on the evening before making contact with Jessica Friesen on Lap 65. Friesen, the wife of series-regular Stewart Friesen, was making her first Truck Series start. She finished in 26th, one position ahead of Stewart.

After a fourth attempt at overtime in the inaugural NASCAR Truck Series event at the iconic 0.5-mile dirt track, Hill scored his first victory of the season in a race that featured 14 cautions and a 17-car pileup in Turn 1 that could rival the biggest “Big One” at Talladega.

Moments after Hill took the checkered flag to end the fourth overtime, fireworks exploded in Turn 3, but they bore pale comparison with the pyrotechnics that punctuated a race that extended 29 laps past its scheduled distance of 150 circuits.

The decisive moment was much more subtle. After a Lap 171 restart—the third-overtime—Hill nosed ahead of Chandler Smith, who had done yeoman work on old tires and led seven times for a race-high 71 laps.

A four-car incident involving Tyler Ankrum, Stewart Friesen, Zane Smith and Johnny Sauter caused the final caution, with Hill having led at the previous scoring loop. That was all Hill needed to hold the point from the inside lane on the final overtime restart.

Two laps later, he crossed the finish line 1.207 seconds ahead of a disappointed Smith, who saw his chance to escape the NCWTS Playoffs bubble with a win evaporate in the last shootout.

The victory was the seventh of Hill’s career.

“I didn’t think we were going to make it back up. Track position was huge. It was really hard to get around people—you had to kind of rough ‘em up a little bit to get around ‘em. But we don’t stop, we don’t quit, even when we think we’re down and out.”

With the victory, Hill clinched a spot in the Playoffs. Smith, on the other hand, will have to sweat out the final regular-season race Aug. 7 at Watkins Glen, though he holds a relatively comfortable 40-point lead over Derek Kraus for the final Playoff berth.

Kraus won the first and second stages Friday and finished fifth by avoiding most of the chaos at the end of the race.

The 17-truck crash ignited in Turn 1 seconds after the field took the green flag for the first overtime on Lap 154. Among the many victims was 10-time Knoxville Nationals winner and 10-time World of Outlaws champion Donny Schatz, who was making his NCWTS debut.

“I had nowhere to go—I was just along for the ride,” Schatz said. “I thought I was going to have a top-10 finish.”

Schatz instead finished 32nd. The best result achieved by a dirt-track ace was eighth by Knoxville Raceway track champion Brian Brown, who fell two laps down after a pair of spins but regained the lead lap as the beneficiary under consecutive cautions and managed to escape the third-stage melees.

Note: When Stewart and Jessica Friesen took the green flag on Friday night, it marked the first time since Elton Sawyer and Patty Moise raced together at Atlanta in 1998 that a husband and wife have competed in the same NASCAR national series event. They finished together—Jessica in 26th and Stewart in 27th.

Hill’s win locks him into the Truck Series playoffs with just one regular-season race remaining. He joins John Hunter Nemechek, Ben Rhodes, Gilliland and Sheldon Creed on the list of 2021 series winners.

How did you pull off this win on the dirt in Knoxville?

“I don’t know. Kind of thought we were out of it there on that restart when I was on the outside of the 38 (Todd Gilliland) and I fell back to like 20th and I didn’t think we were going to make it back up. Track position was huge and it was really hard to get around people. You had to kind of rough them up to get around them. I just kept my head down. This team and everybody at HRE (Hattori Racing Enterprises), they never quit and that’s the thing I love about this group. We don’t stop, we don’t quit – even when we think we’re down and out, we just keep coming back. If you would have told me that we would win a dirt race this year, I would have told you that you were lying. I can’t thank everybody at Toyota enough – Tochigi, Toyota Mobility Parts, Fukishima and everyone else for being on this truck. Jack Irving (TRD) and Tyler Gibbs (TRD) and everyone for helping me to get to where I’m at. My parents, my family – this is awesome.”

What happened in the final restarts of the race?

“First of all, just have to thank Danny (Stockman, crew chief) and all the guys on this No. 18 JBL Toyota Tundra team. They worked their tails off on this thing and we got it really good in practice. We fell back there in the race and I couldn’t run the top, but we were able to make it work on the bottom. We needed track position, but we were able to lead a bunch of laps. I don’t think the call was right (at the end with regard to line-up) that they (NASCAR) made to be honest, but it is what it is and that’s part of it.”