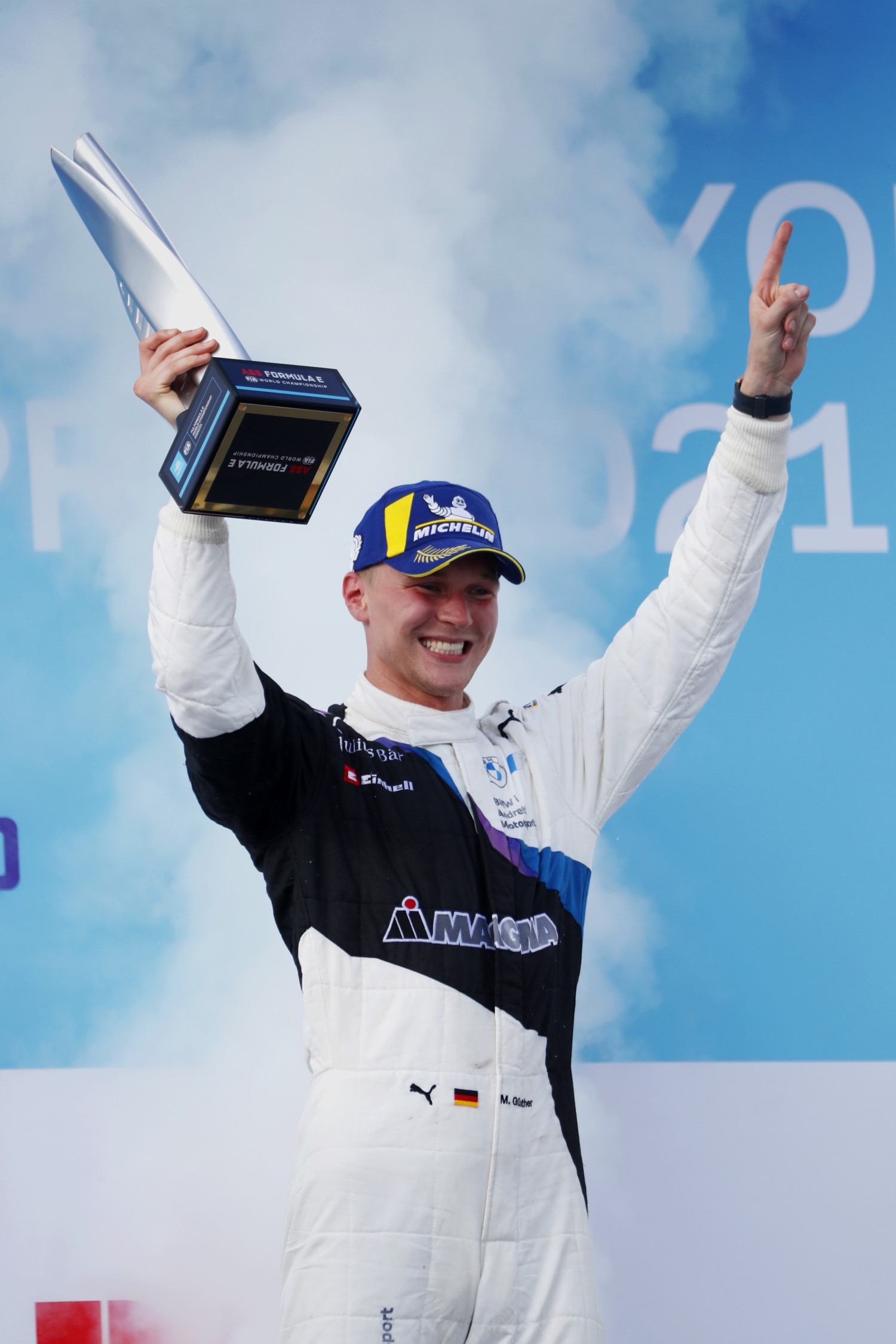 BMW i Andretti Motorsport’s Maximilian Guenther pieced everything together perfectly in the first race of an ABB New York City E-Prix double-header, mastering the streets of Brooklyn for the win on home soil for the BMW i Andretti Motorsport team ahead of Jean-Eric Vergne (DS TECHEETAH) and Lucas di Grassi (Audi Sport ABT Schaeffler).

It was his first win of the season in race ten of this year’s ABB FIA Formula E World Championship in New York City.

The German measured things maturely from fourth on the grid to pick his way into the race lead as Vergne forced his way by polesitter and long-time race leader Nick Cassidy (Envision Virgin Racing) at the hairpin with five minutes to go. Guenther made his efficiency advantage count, with a percentage point of usable energy in-hand over Vergne meaning the Frenchman had to settle for second spot.

Di Grassi clambered up the order from seventh to take the checkered flag third, with Cassidy eventually winding up fourth, while teammate Robin Frijns followed in fifth.

The Nissan e.dams pair of Sebastien Buemi and Oliver Rowland followed with Porsche’s Andre Lotterer close behind in eighth. A storming recovery drive from Jaguar Racing’s Sam Bird after that Free Practice 1 shunt, and a mad rush to make repairs ahead of qualifying, yielded points and ninth plus the TAG Heuer Fastest Lap, while Rene Rast (Audi Sport ABT Schaeffler) rounded out the top 10.

That result meant nine winners from 10 races in Season 7 so far, and sees Frijns draw level with Edo Mortara (ROKiT Venturi Racing) at the top of the Drivers’ standings, with Vergne propelling himself into third in the running ahead of Round 11 in The Big Apple tomorrow (July 11) from 1330 local time.

Off the line, polesitter Cassidy immediately darted over to cover Vergne and Lynn’s advances but he needn’t have worried about the Mahindra, with Lynn locking up and overrunning Turn 1 – falling to fifth as a result, with Buemi and Guenther profiting to go third and fourth, respectively.

Five laps into the encounter, and the Kiwi had broken away in the lead to the tune of a second, with the entire top 15 sat within 10 seconds of one-another.

After that Lap 1 error, Mahindra’s Lynn decided to make the jump for his first ATTACK MODE activation early but was forced into slowing to avoid contact with Audi Sport ABT Schaeffler’s di Grassi and Porsche’s Wehrlein, running fifth and sixth. The Brit made it back into sixth with a move on the Wehrlein, though from second-placed Vergne through Buemi, Guenther and di Grassi each made their first 35kW dose work perfectly, losing no ground whilst veering through the activation loop.

Leader Cassidy was last of the front-runners to take ATTACK MODE number one on Lap 7, and held top spot. As you were, then, with Cassidy heading Vergne, Buemi, Guenther, di Grassi, Wehrlein, Lynn, Rowland, Frijns and Sims rounding out the top 10 with a quarter-hour gone.

On Lap 10, Lynn would have every right to feel frustrated after Wehrlein clouted the rear of his Mahindra whilst looking to dive the second mandatory ATTACK MODE down at the Manhattan Hairpin. A clumsy move from the German ended his race early, and cost Lynn a spot to Nissan e.dams’ Oliver Rowland.

Progress was proving hard to come by for some of the current title protagonists. ROKiT Venturi Racing’s Edoardo Mortara was marooned down in 21st, Stoffel Vandoorne (Mercedes-EQ) 18th and Rene Rast (Audi Sport ABT Schaeffler) 17th. Sam Bird, on the other hand, set about mounting a recovery drive from 20th – 13th for the Brit half way into the encounter while teammate Mitch Evans was forced into retirement with a technical fault.

With 22 minutes plus one lap to run, the top nine had already taken both of their 35kW ATTACK MODE boosts, setting up a straight fight to the line. Vergne looked to be scenting blood as he set about leader Cassidy, with the duo jumping clear of Guenther, di Grassi, Frijns and Rowland behind – the latter leapfrogging Nissan e.dams teammate Buemi into sixth having started three places behind the Swiss.

Inside the final 15 minutes, and Guenther was starting to make a small energy advantage count. The third-placed BMW driver had held onto a percentage point or two of usable energy over the lead pair and hauled in Vergne’s DS – the top three now split by less than 1.5 seconds.

Meanwhile, no sooner had Jake Dennis (BMW i Andretti Motorsport) scrapped his way into the points, up from 15th on the grid, did his car give up. Disappointment for the Brit whose elbows-out style looked set to yield good points. Bird was to profit, himself having clambered from well down the order after the rapid post-practice rebuild of his i-TYPE 5.

Cassidy looked to be managing things tidily as the race entered its final throes, with Vergne at arm’s length and Guenther defending third from a feisty-looking di Grassi as the lead quartet broke clear of the rest.

A timely shot of FANBOOST for Vergne brought the DS within striking distance of Cassidy though, and with the Virgin holding less energy in hand, Vergne saw his opportunity to pounce, barging by Cassidy at the hairpin.

The Frenchman made the pass stick, but overcooked it in the braking zone – allowing Guenther to pick up the pieces and the race lead with five minutes to run. Vergne held second, with di Grassi stealing by Cassidy into the final podium position.

Guenther managed things without fuss to the line over the final five minutes plus one lap, heading home that lead four as they stood, with Frijns, Buemi, Rowland, Lotterer, Bird and Rast rounding out the top 10.

“Winning here in New York at the team’s home race is very special, but it’s also a special victory because of the season we had so far. Many times things didn’t go our way and we couldn’t score as many points as we wanted to, but we always kept going and focused on ourselves. We know what we are capable of.

“Today we did a good job managing the race. I had the most energy of all front-runners left in the end. That is an advantage, but overtaking still is very difficult here. Jean-Éric made the move into the hairpin, both race leaders ran wide and for me, that was the perfect opportunity to overtake both. After that, I was in a comfortable situation with the amount of energy I had left.”

In the Driver’s Championship, Günther has climbed from 18th to 12th place, courtesy of the 25 points for the win. With 53 points, he now trails Dennis in eleventh place by just one point. BMW i Andretti Motorsport is now sixth in the Team standings with 107 points.