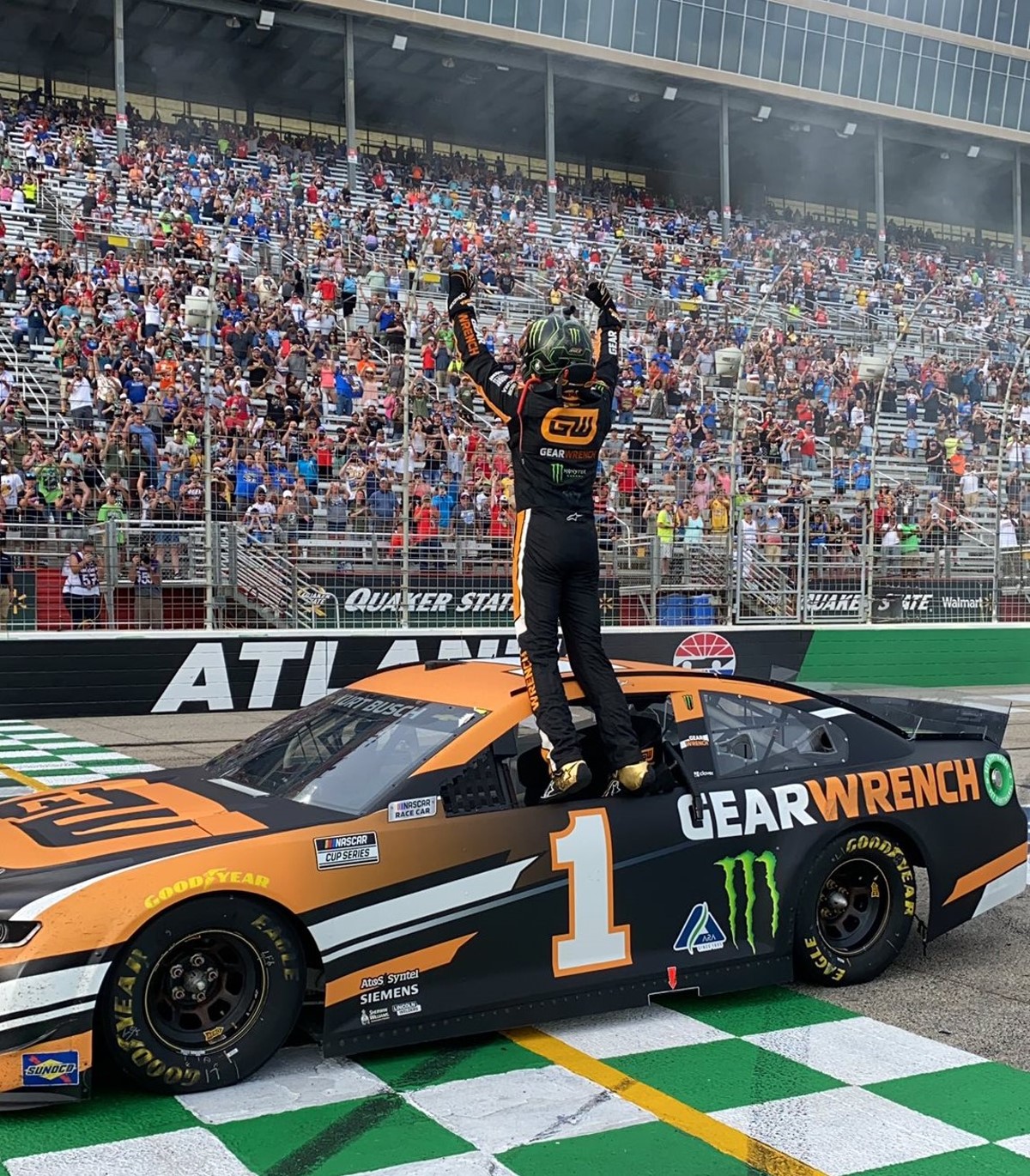 The Busch brothers locked horns in a long-ranging battle that thrilled the crowd at Atlanta Motor Speedway on Sunday.

The elder Busch, Kurt, came up clutch to win the Quaker State 400 Presented by Walmart on a track he doesn’t miss a chance to laud. Kurt Busch won at AMS for the fourth time, the most among active drivers, in the last NASCAR Cup Series race before the track is repaved and reprofiled for 2022.

“Hell, yeah! We beat Kyle!,” Kurt said with a fist pump and a chortle in front of the raucous crowd. “I taught that kid everything he knows.

“What a battle. What a genuine, awesome, old-school race track. I just asked the track today, ‘Last time here on your old asphalt, can I have an old-guy win?’ And she answered. Thank you Atlanta Motor Speedway!”

Kyle Busch gave it his all in the runner-up performance. His No. 18 was second when he pitted for the final time with 49 laps to go. Kurt followed on his next pass, but wasn’t fast enough off pit road to prevent Kyle from taking the lead.

Kurt pulled even to race door-to-door with 23 laps left. A spirited, side-by-side duel lasted for nearly a lap before Kurt found his opening to slip by. The No. 1 Gearwrench Chevy grabbed the lead with an assist from young teammate Ross Chastain.

“Shake and bake! Shake and bake, No. 42,” Kurt said with a laugh. “Ross is going to get a little flack for it, but that’s what it takes to be a good teammate at the right moment.”

“I had everything I had and then smoked it behind the 42,” Kyle Busch said. “Shows you what kind of driver he is. When I got past, I had one valiant effort off of (Turn) 2, but just didn’t have enough momentum to drag him down.”

The brothers ran a helix pattern on Lap 253 of 260 with Kyle briefly getting ahead, but Kurt reeled him in and rocketed to his 33rd Cup victory. It ties him on the all-time rankings with Fireball Roberts.

“The guys gave me a great piece,” Kyle said. “We were fast. (The No.) 1 was definitely better than us today. I just thought I had him. And we did. But the racing didn’t play out for us.”

The two finished 1-2 for the fourth time and Kurt tied the series with the win. He’s come a long way since his first start at Atlanta Motor Speedway when he missed the cut to qualify in 2000. Kurt Busch earned his first AMS win in 2002 and savored another sweet victory Sunday.

“Now to win this on the old surface, I’m very appreciative of today and to be able to win at Atlanta Motor Speedway in the last running on this asphalt,” he said to the crowd.

“This has been one of those years where I knew we were going to have our back up against the wall trying to make the (playoff) cutoff.”

Hometown favorite Chase Elliott started on the pole. He was overtaken by Kyle Busch 14 laps into the race and then was dropped to 18th for overshooting his pit box during a competition caution four laps later. Elliott climbed back up into the top 10 during Stage 2 and finished seventh.

“We had a long day for sure,” he said. “We changed a bunch of stuff throughout the day and just kept grinding.”

The Busch brothers took up their 1-2 positioning early when they overtook then-leader Denny Hamlin following a Lap 36 restart. They carved out a significant 4.5-second lead over the field by Lap 55.

Kyle Busch won Stage 1 with Kurt lurking just 1.63 seconds back. The No. 1 jumped to the front coming off pit road during the yellow between stages.

With rain threatening, Aric Almirola and Ryan Preece opted not to pit with the leaders and roll the dice on getting to the midway point of the race. The gamble and the rain fizzled, allowing the Busch brothers to run them down on new tires.

The race was briefly red-flagged on Lap 167 when a hole opened up in the asphalt, which will be replaced and reworked for 2022. The delay didn’t douse the building tension, thanks to the Busch brothers. Following his triumph, Kurt was awarded the trophy and a chunk of the old racing surface. 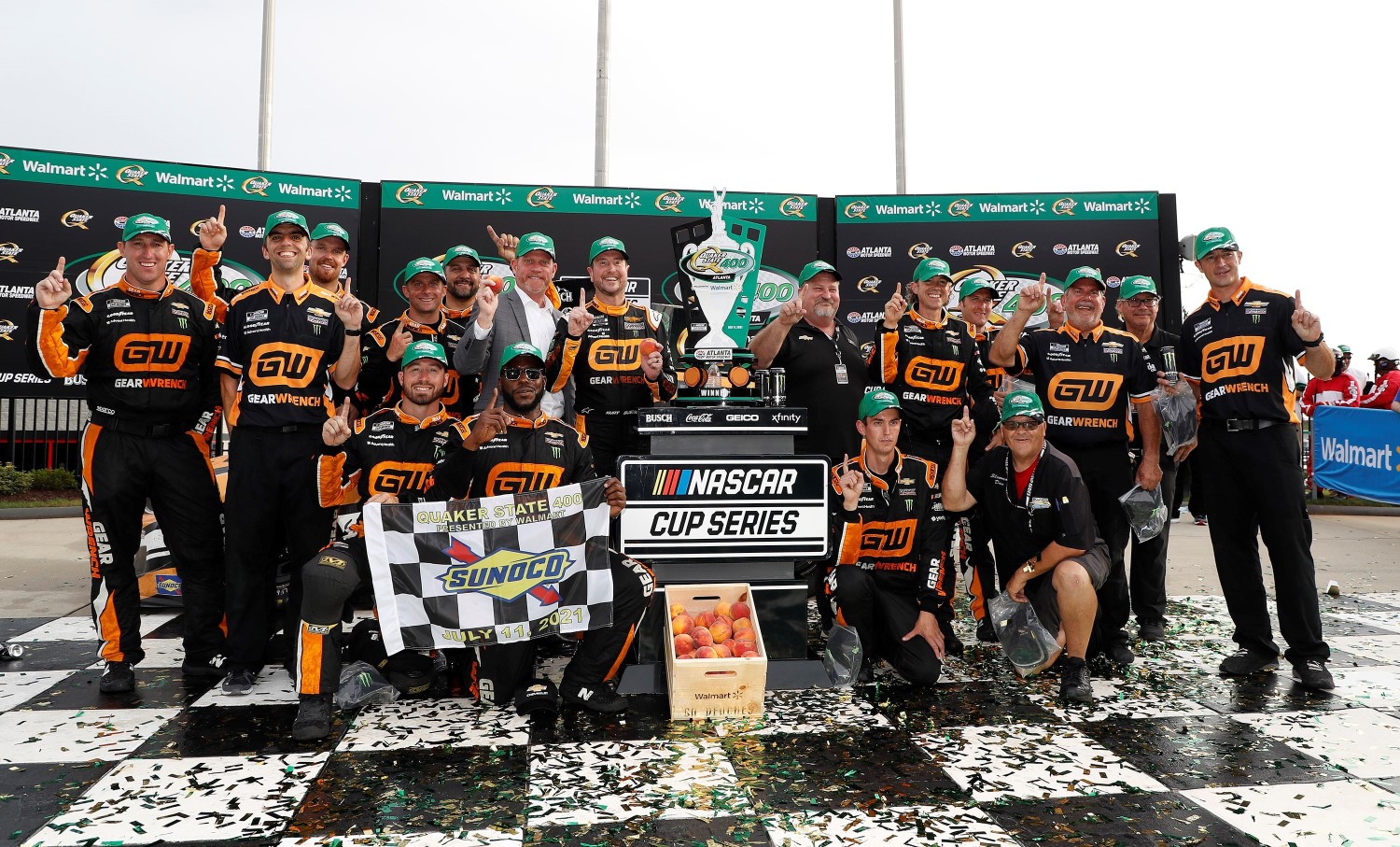 Q. How about that, Kurt? More significant, obviously it’s the big playoff win and puts you guys in the playoffs, but that you were able to beat your brother heads up on a green flag run for that long.

I taught that kid everything he knows; he should be grateful.

What a battle. What a genuine, awesome, old-school racetrack, and I just asked the track today, last time here on your old asphalt, can I have an old guy win, and she answered. Thank you, Atlanta Motor Speedway!

This has been one of those years where I knew we were going to have our back up against the wall with trying to get above the cutoff line and race hard and race smart, and to have GEARWRENCH in Victory Lane, this is their last race of the year, they’re with us all year, and with Monster Energy, I couldn’t have two great primary sponsors. What a Chevrolet today, hell yeah!

Q. You said one for the old guys, but it was your young teammate that you gave so much credit to. What was the key moment where he was able to push you by the 18?

KURT BUSCH: Shake and bake! Shake and bake! Yeah, and the 42, he did his job as a teammate. Ross is going to get a little flak for it, but that’s what it takes to be a good teammate at the right moment, so I couldn’t be more proud of Ross Chastain.

I’ll pay him back eventually, but right now this is our No. 1 car in Victory Lane.

Q. You pull off these clutch wins all the time, Kurt, to put you in the playoffs, but with the unknown of next year, how big is this moment for you personally?

KURT BUSCH: It’s wonderful. You know, for all of Ganassi, Trackhouse bought our team, I don’t know where I’m going, but I just love racing cars and I want to race that Next-Gen car. That’s why I’m trying to stick around. Will you guys have me next year if I stick around?

What did you need to hold the lead and take the win over Kurt Busch today?

“It’s just the same as always. We just don’t have enough front end with laps on tires. I had everything I had early in the run and then just smoked it behind the 42 (Ross Chastain), obviously. It shows you what kind of driver he is. Just tried to fight hard after that when I got passed and had one valiant effort off of (turn) two, but didn’t have enough momentum to drag him down and make him go high in (turns) three and four, and after that, the tires were smoked. Great effort. Guys gave me a great piece. We were fast. The No. 1 (Kurt Busch) was definitely better than us today. I just thought I had him. And we did. But racing just didn’t play out that way for us. The Skittles Gummies Camry was fast, and thanks to Toyota, TRD, Rowdy Energy Drink, Interstate Batteries, all the guys. Good piece, just not quite good enough, just needed a tick more.”

Does it feel like you passed the most cars during today’s race after starting from the rear and having additional circumstances put you to the rear during the race?

“I would say that’s a fact. It’s funny you look at results and oh, you started fifth and finished third, that’s a pretty good day. We went through a lot today on our Auto Owners Toyota Camry. I’m excited to have them on board again and have a good run for them. We definitely had the speed to battle for the win at the end, just had to come from too far back. I’m proud of everyone at JGR (Joe Gibbs Racing), Toyota, TRD. Everyone at the shop is working really hard getting our stuff better. It just had the feel I was looking for today. We were good on the short runs and good on the long runs. I’m glad to be back running up front.”

Have we seen a little bit of a shift today in the competition level with Hendrick Motorsports?

“I think these days we are all so close. Atlanta is such a handling track. If you hit it just right, you are going to be really, really strong. It’s so hard. It’s like every other week there is different guys that run good. It’s crazy this season how it’s been. These cars have been really sensitive. It’s hard to hit it right, and that’s what it takes. Whoever does it most consistently is going to be the one to beat. Hendrick cars, don’t count them out – that’s for sure.”

“If you look at the stat sheet, it’s going to say we started fifth and finished third, it looks like a pretty solid day, but I had to start in the back and then getting towards the front, I think we got up to eighth or 10th or somewhere in there, and we had contact on pit road. The 4 (Kevin Harvick) ran into us, and we had to pit and pull the fender out and start in the back again. I got all the way back up through there. It’s one of those days. Passed a lot of cars. The first two stages was the same cars over, and over and over, which is frustrating, but in the end our Auto Owners Toyota Camry was really, really fast. We closed in to within two or three seconds from leaders, but just ran out of time there.”