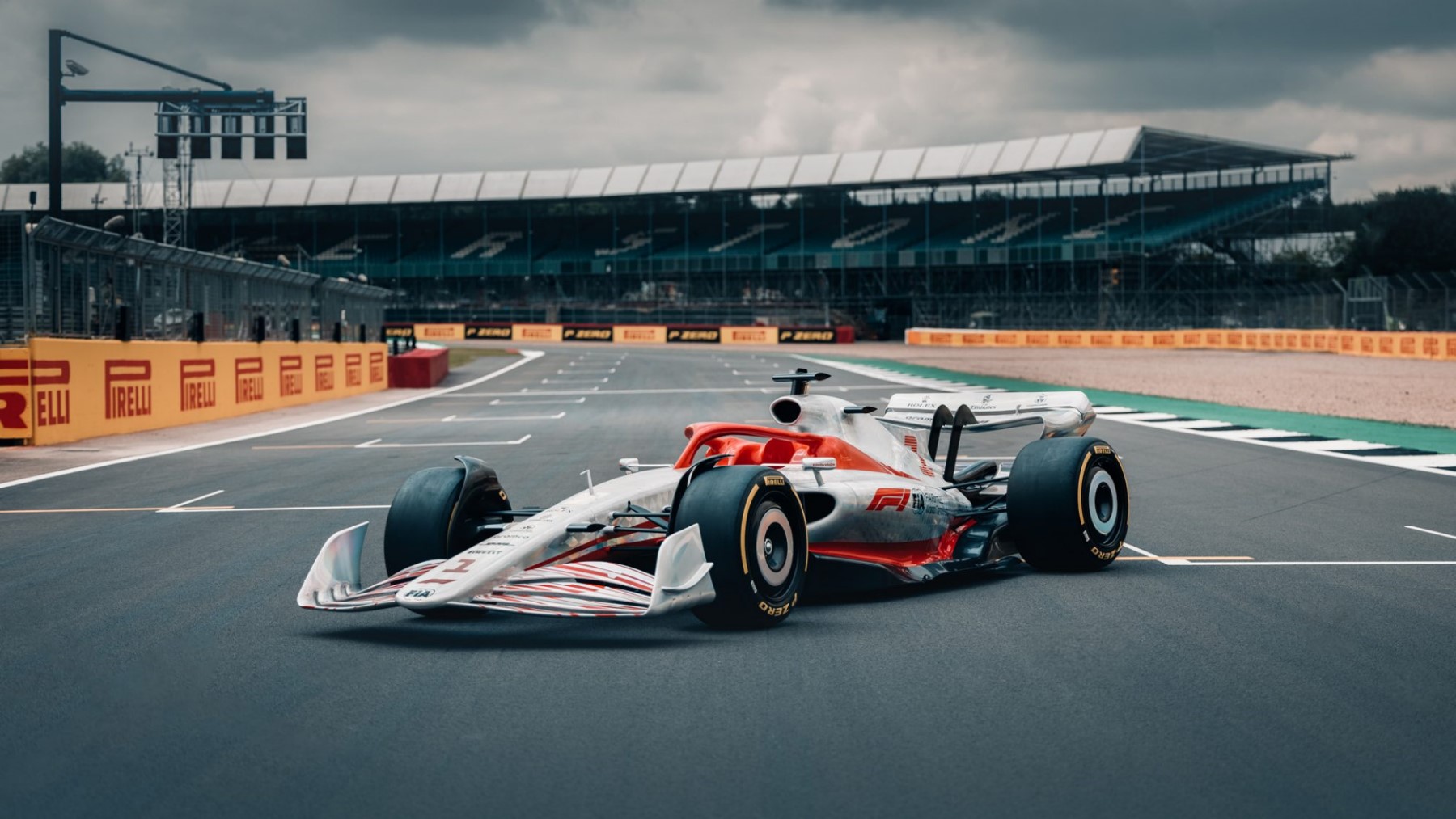 Today, ahead of the British GP weekend, Formula 1 gave us the first-ever glimpse of a full-size 2022 car.

Research shows that current F1 machines lose 35% of their downforce when running three car lengths behind a leading car (approximately 20 meters, measured from the lead car’s nose to the following car’s nose), while closing up to one car length (around 10 meters) results in a 47% loss. 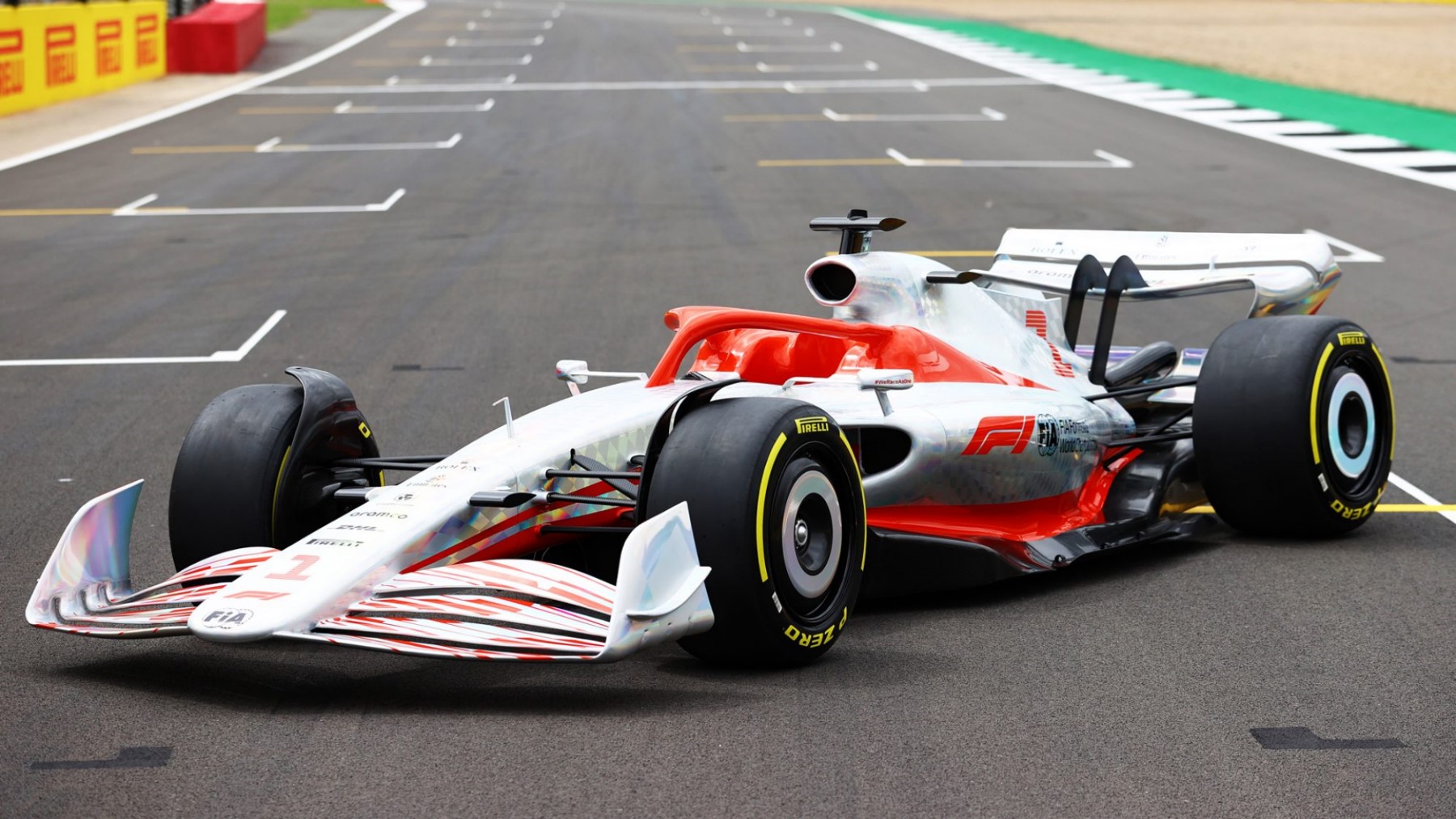 The 2022 car, developed by Formula 1’s in-house Motorsports team in collaboration with the FIA, and putting a heavy onus on the aerodynamic phenomenon known as ‘ground effect’ (more on which later…), reduces those figures to 4% at 20 meters, rising to just 18% at 10 meters.

The car will feature over-wheel winglets for the first time – and wheel covers are back!

The car will feature 18” wheels with low-profile tires for the first time – The lower profile tires also have the added benefit of reducing the sidewall deflection changes and the resulting aerodynamic wake effect that occurs. The teams spend a lot of effort on simulating the airflow regimes around the tire shapes and interactions with the car bodywork.

The front wing and nose concept have been completely re-thought – the new front wing’s job is to both generate consistent downforce when running closely behind another car, and ensure that the front wheel wake is well controlled and directed down the car in the least disruptive way.

An aero feature from the 70s is back – the 2022 car does feature fully shaped underfloor tunnels, rather than the stepped floor used currently, which will allow teams to generate large amounts of efficient downforce through ground effect (the current floors also exploit ground effect, but not to the same extent)

The rear wing features new ‘rolled tips’ – While current cars’ rear wings direct airflow upwards, they are also designed to send flow outwards, leaving the ‘dirty air’ sitting there for the following car to drive through. By contrast, the shape and position of the 2022 car’s rear wing creates a rotational airflow that collects the rear wheel wake and rolls it into the flow exiting the diffuser – forming an invisible ‘mushroom’-shaped wake. This narrower wake is then thrown – thanks also to a steeper diffuser ramp – high up into the air, allowing a following car to drive through less disrupted ‘clean air’.

It will use the same power unit as 2021 –  There will, however, be some more standard components in the fuel system, as well as some additional sensors to allow the FIA to better monitor the power units.

Safety has been at the forefront of the design – The chassis now need to absorb 48% and 15% more energy respectively in the front and rear impact tests, as well as greater forces in the static ‘squeeze’ tests required to homologate the chassis and certify their strength. The new car will have a longer nose section to help dissipate energy in a crash, together with stronger chassis sides to resist T-bone incidents. It’s also true that those safety improvements, as well as the heavier and more robust tires, have seen a weight increase, with the minimum car weight having risen by around 5% from 752kg currently to 790kg.

The 2022 car has been put through over 7,500 simulations to get to this point – Meanwhile, the teams have also been granted regulatory freedom to test the current 2022 car iteration – or the ‘UNIFORM’ baseline as it’s known internally, given that it’s the 21st significant update – for methodology development in their wind tunnels and CFD (provided they don’t alter the shape), with the feedback from the teams having been a crucial part of the design and development process.