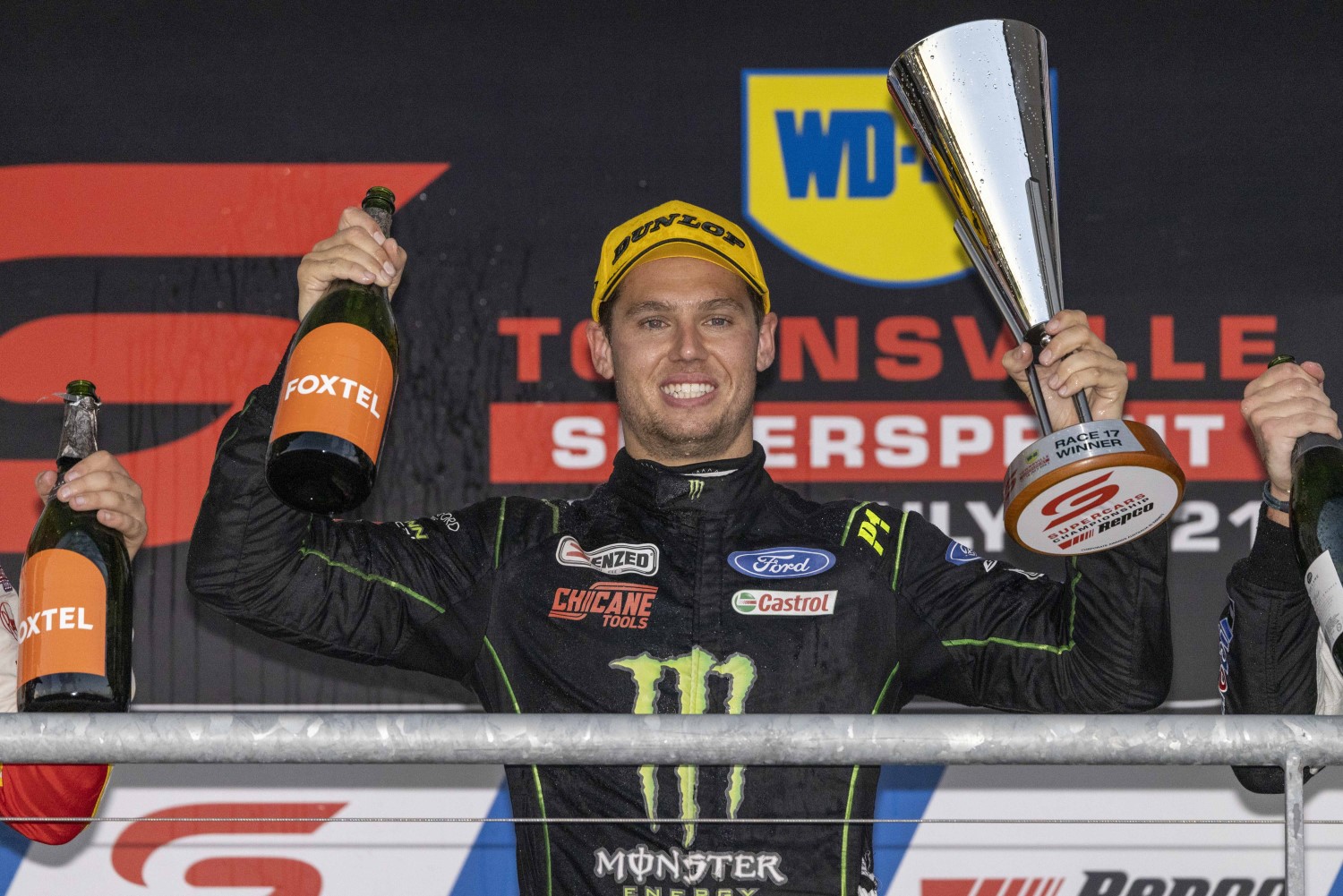 Ford’s Cam Waters has broken through for his second race win of the 2021 Repco Supercars Championship in a drama-filled opening race of this weekend’s WD-40 Townsville SuperSprint.

The Monster Energy Mustang driver claimed the fourth win of his career on the Reid Park circuit in this afternoon’s twilight race.

He finished ahead of fellow Ford driver Anton De Pasquale and Walkinshaw Holden’s Chaz Mostert – who claimed his podium finish after Jamie Whincup was handed a post-race time penalty for speeding in pit lane.

Whincup and teammate Shane van Gisbergen, who together dominated last weekend’s opening races in Townsville, were both slapped with penalties by race control in today’s 39-lap SuperSprint.

Whincup received his penalty for exceeding the 40km/h speed limit in pit lane as he tried to stalk Waters into a pit stop, while van Gisbergen received a 15-second time penalty following an on track incident with rookie Brodie Kostecki in the opening laps.

There were a number of incidents in the race, including an early multi-car crash that ended the day for Brad Jones Racing’s Macauley Jones.

Behind the podium winners were Tim Slade, with his best result of 2021.

Whincup’s pit lane penalty saw him slide to a fifth place finish just ahead of van Gisbergen who recovered from his own 15 second penalty to finish sixth.

At the front, Waters and De Pasquale, who started side-by-side on the front row led from start to finish.

De Pasquale in the #11 Shell V-Power Mustang led early, but Waters went with the strategy of pitting first and it paid off.

The 26-year-old Mildura product maintained his lead after De Pasquale pitted and went on to claim his first victory in Townsville and Ford’s 11th win in North Queensland since 2009.

The win is Waters first win since May’s OTR SuperSprint, and Tickford Racing’s first in Townsville since 2015.

The result sees Waters leapfrog Will Davison into fourth in the Championship standings.

“The old over and under… I knew I had to do it then,” Waters said of his move on De Pasquale.

“I’m so pumped. Obviously last week we got smoked, and to bounce back is unreal.”

De Pasquale was disappointed to fall short of a third career victory.

“He had warm tires and I had cold tires,” De Pasquale said.

“You can go around the outside or down the inside, but I had no grip when I got there.

“We probably just pitted one lap too late, and that’s it.”

There will be two more 39-lap SuperSprints tomorrow starting at 12:45pm and 3:40pm respectively.