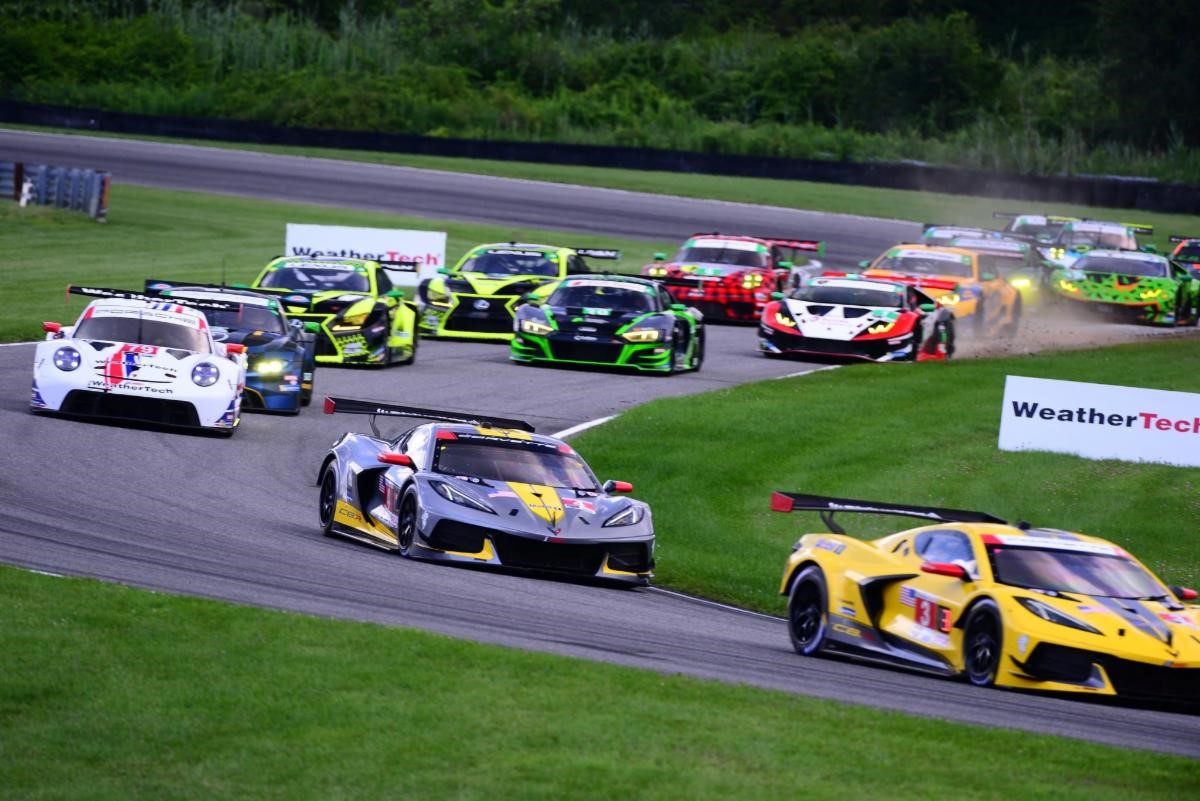 With a huge crowd, a US Senator waving the green flag ahead of some exciting racing, and a rapid change of weather that caused an early end to the feature race, it was a dramatic day of racing on Saturday at Lime Rock Park.

The Connecticut circuit played host as IMSA returned to the track for first time since 2019 and featured the Michelin Pilot Challenge as well as the WeatherTech SportsCar Championship races on Saturday.

After morning showers cleared, a large crowd of fans assembled on the hillside to soak in the sun. The crowd was packed for the fan walks that preceded both races as race fans swarmed the pit lane to get an up close look at the full fields just before they took to the track to race.

Connecticut United States Senator Robert Blumenthal made a return visit to Lime Rock Park, delivering an enthusiastic call for the drivers to start their engines ahead of waving the green flag to open the 2 hour and 40 minute NorthEast Grand Prix. Just shy of an hour and a half into the race, the field was stopped as IMSA red flagged the race due to inclement weather in the area.

Taylor and Garcia had the No. 3 Mobil 1/SiriusXM Chevrolet Corvette C8.R ahead when the race was stopped with 70 minutes left due to lightning in the immediate area of the track. Race officials called the race with 25 minutes left in the two-hour, 40-minute GT-only contest.

Tommy Milner and Nick Tandy placed second in the No. 4 Mobil 1/SiriusXM Corvette C8.R, their second straight runner-up finish. Saturday’s results increased the lead for Garcia and Taylor in the GT Le Mans (GTLM) Drivers Championship and Chevrolet’s advantage in the Manufacturers standings.

Taylor began from pole position and Milner third following a precautionary engine change overnight. Milner moved the No. 4 up to second behind Taylor at the start, and the two Corvettes ran 1-2 throughout the race. Both cars made their first stops a lap apart just past the 30-minute mark for fuel and tires. By that point, both Taylor and Milner were mired in slower GTD traffic and on a three-stop strategy.

Milner, who suffered damage in his second stint after contact from a slower car, was the first Corvette driver to make his second stop and handed off to Tandy with 80 minutes remaining. Taylor did the same a lap later with a swap to Garcia as both Corvettes took fuel and fresh Michelin tires.

Five minutes later, race officials called for a full-course caution to monitor the approaching weather and stopped the race a lap later.

“It is what it is,” Garcia said. “We had a ton of fans out here today, and safety comes first. This time we were lucky in that we were leading when the red flag came. For sure, you need to be up there in that position to benefit from the conditions.”

“Yes, last year was an amazing season and this year for sure, the C8.R is working really good. We didn’t know what the race would be like, and I ended up doing only like 10 laps, if that. Still, Jordan did an amazing two stints there and drove really, really good. Tire degradation was very bad, but he drove really good. I’m very pleased with that.”

After the first lightning strike, De Angelis – with Gunn and their No. 23 Heart of Racing Team Aston Martin Vantage GT3 leading – only wanted more lightning.

“We definitely knew the weather was coming,” De Angelis said. “Sitting on the pit box, we were all feeling a little light drizzle coming. We were definitely expecting something to change with the track conditions.

“Obviously, (Gunn) saw the splashes on the windshield, but we couldn’t really tell what was going to happen with the lightning. Once it started, in a way we hoped the lightning would come in a time that would allow us to not have to go out again.”

The GT Le Mans (GTLM) class victory was the fourth this season and ninth in the last 16 races for Garcia, Taylor and the No. 3 Corvette. Tandy and Tommy Milner shared the GTLM runner-up finish in the No. 4 Corvette, while Mathieu Jaminet and Cooper MacNeil finished third in the No. 79 WeatherTech Racing Porsche 911 RSR-19.

The unusual finish reminded Taylor of the 2019 Rolex 24 At Daytona, which was stopped short of the 22nd hour due to heavy rain. Taylor was part of that race-winning Wayne Taylor Racing team but had to wait out the weather delay to get to the celebration.

“You’re waiting to see if it’s going to go green again, so it’s kind of very stressful with the unknown,” Taylor said. “Today, looking at the radar, a couple of miles north of the track there were a crazy amount of lightning strikes, so I think it was going to come this way no matter what. It wasn’t as rainy as Daytona that year, but today was a similar feeling.”

The first Lime Rock win for Garcia and third win in four weeks for the No. 3 car was both planned and unplanned. Garcia and Taylor knew the plan going into the race but didn’t know how it would end.

“It was about fuel mileage, saving tires and getting through traffic cleanly,” Taylor said. “Thankfully, we executed well and the driver change went well. We knew the weather was imminent at some point and that it could be red-flagged, so we knew track position was going to be important. Thankfully, we were out front when that came.”

Not even the elements can seem to stop Roman De Angelis and Ross Gunn in the IMSA WeatherTech SportsCar Championship.

The No. 23 Heart of Racing Team drivers continued a torrid streak that began late last year, winning Saturday’s GT Daytona (GTD) portion of the Northeast Grand Prix at Lime Rock Park. Originally scheduled for two hours, 40 minutes, the race was red-flagged after 90 minutes due to lightning in the area and unable to be restarted.

The result netted De Angelis and Gunn their second win of the season in the No. 23 Aston Martin Vantage GT3, their fourth straight podium finish and 11th top-five performance in the last 12 races dating to last September at Mid-Ohio Sports Car Course. In addition, the high-riding driver duo took over the GTD season points lead and extended their advantage in the IMSA WeatherTech Sprint Cup.

“It’s a big deal for us,” Gunn said of the season points lead. “We’ve just slowly chipped away throughout the year – got fifth, fourth, third, first (in previous races). It’s been going really well.

“I think the main strength of this team is the execution and the lack of mistakes,” Gunn added. “And I’m talking about every member of the team. The pit stops are great, the strategy is great, the setup has been getting better and better every weekend. And me and Roman have been learning the tracks quicker.”

De Angelis started from the pole position Saturday and only surrendered the lead when he made what turned out to be the only pit stop of the day 47 minutes into the race. Gunn took over the car and returned to the front as the stops cycled through. He was leading Madison Snow in the No. 1 Paul Miller Racing Lamborghini Huracán GT3 by nearly two seconds when IMSA officials ordered a full-course caution for lightning.

The red flag officially came with 70 minutes remaining. Additional nearby strikes continued to push back the mandatory 30-minute window for no lightning in the area until not enough time remained to continue the event.

“Historically it’s been a track where the guy who starts on pole usually has a pretty good chance at winning,” said De Angelis, who dedicated the victory to his grandfather Frank De Angelis, who passed away earlier this week. “I pushed as hard as I could and got the most out of the car, and the crew did an amazing job as always. Just happy to get a win after a pretty tough week for myself. Really happy to try to get that win for him.”

Snow and co-driver Bryan Sellers finished second in the No. 1 Lamborghini, with Jack Hawksworth and Aaron Telitz taking third in the No. 14 Vasser Sullivan Lexus RC F GT3.

“The main job here is done in quali,” Gunn said of the tight, 1.474-mile Lime Rock circuit, “and that’s where Roman aced it this weekend. He made my job a lot easier. It’s a strange way to finish the weekend. I would’ve liked to have finished it on the road, for sure, but a win is a win. … Hopefully, we can keep this momentum going forth.”

Gunn and De Angelis have finished no worse than fifth in any race this season, a true sign of the team’s cohesive development. Team principal Ian James, who started the Heart of Racing operation with Aston Martin last year and stepped out as a full-time driver this season to focus on overseeing the program, is pleased with the progress but sees more to come.

“I knew it was going to take a while to get it to where we needed it to be,” James said. “The crew came together really fast but learning a car up against such stiff opposition that have had years of experience, we knew that was going to take time. We just keep refining every little thing, from the pit stops to the car to the driver changes and we’re not going to stop there.”

Gunn and De Angelis are now 28 points ahead of No. 96 Turner Motorsport BMW M6 GT3 drivers Bill Auberlen and Robby Foley, who finished fifth on Saturday, in GTD season points. Gunn and De Angelis also expanded their Sprint Cup advantage to 165 points on Frankie Montecalvo, co-driver of the No. 12 Vasser Sullivan Lexus with Zach Veach that wound up 10th in the race.