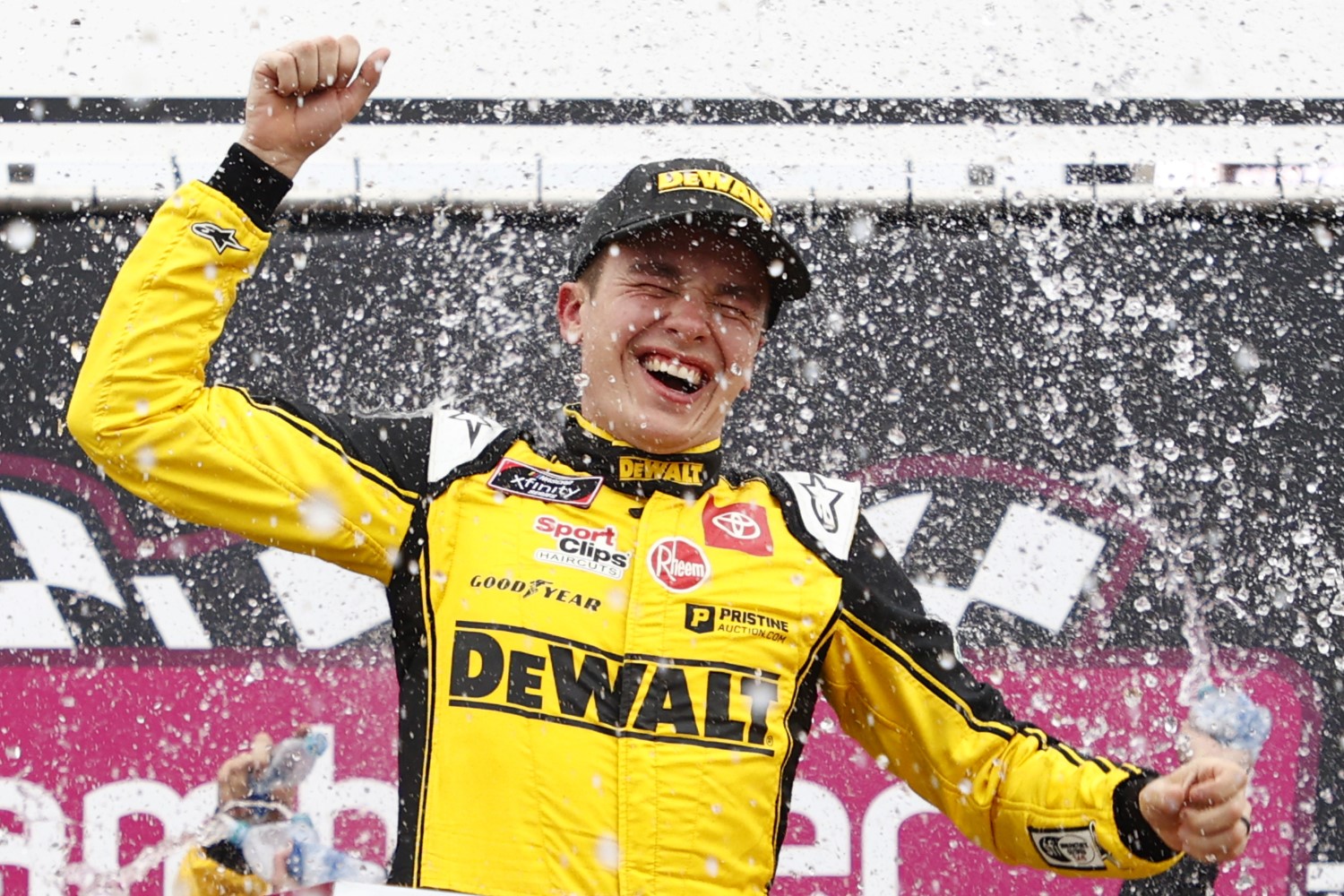 Kyle Busch had used up his eligibility for this year in the NASCAR Xfinity Series.

Ty Gibbs had the week off.

But the No. 54 Joe Gibbs Racing Toyota they have driven to a combined seven victories this season was still around—much to the chagrin of the series regulars.

Competing in the Xfinity Series for the first time since he finished third in the final standings in 2019, Christopher Bell led 151 of 200 laps, swept the first two stages and won Saturday’s Ambetter Get Vaccinated 200 at New Hampshire Motor Speedway.

The victory was Bell’s third straight at the 1.058-mile track and the 17th of his career. It was the sixth straight win for Joe Gibbs Racing at New Hampshire, which did not host an Xfinity Series race last year because of schedule changes necessitated by the coronavirus pandemic.

Bell was the only former New Hampshire winner in the field for Saturday’s race. He finished a comfortable 6.241 seconds ahead of runner-up Justin Allgaier, who held off third-place Daniel Hemric during the final 45-lap green-flag run.

From Bell’s standpoint, the secret to success was easy to define.

“What I’ve got figured out is I’ve got really, really fast race cars to drive,” said Bell, who started 14th and took the lead for the first time on Lap 44—one circuit before the end of the first stage. “I just love being here with Joe Gibbs Racing. All these Supras I’ve for the last three times I’ve been here have been amazing.

“Hopefully, the Camry is just a good tomorrow (in the NASCAR Cup Series race), but it just feels good to win.”

A flat right front tire shot Patrick Emerling’s Chevrolet into the outside wall in Turn 4 to cause the fifth and last caution of the race on Lap 149. After an adjustment to his No. 7 Chevrolet designed to create short-run speed, Allgaier battled Bell side-by side after the final restart on Lap 156.

But the strength and turning ability of Bell’s car, set up by crew chief Chris Gayle, soon prevailed, and Bell pulled away as Allgaier and Hemric fought for the second position.

“Obviously, it was a good short-track battle there,” Allgaier said. “This place is difficult, but it’s fun. You’re out there and you’re sliding around a lot. We didn’t start off the race like we wanted to, and (crew chief) Jason (Burdett) and the boys did a great job of making adjustments and getting us where we needed to be at.

“I wish I knew what we needed there. The Gibbs cars definitely had something we didn’t have today. We’ll go back home, we’ll keep working on it and hopefully get our Brandt Camaro into Victory Lane sooner than later.”

Herbst made a remarkable recovery from an early accident on a Lap 26 restart and now trails Michael Annett by 32 points for the final Playoff position. Annett missed Saturday’s race—with Berry as his substitute—after undergoing surgery for a stress fracture in his right femur.

NASCAR opted not to apply traction compound to the third lane of the racing surface, though the PJ1 had been used for recent races at New Hampshire.

Accordingly, Bell believes racing on Saturday without the compound will give him an advantage in Sunday’s Cup race.

“Especially coming here, the Xfinity rules package is really similar to the Cup rules package,” Bell said. “I hope we have a really fast Camry tomorrow.”

What is it that you have figured out about New Hampshire?

“What I’ve got figured out is that I’ve got really, really fast race cars to drive. I just love being here with Joe Gibbs Racing. All these Supras that I’ve had the last three times I’ve been here have been amazing. Hopefully my Camry is just as good tomorrow, but if feels good to win, finally got DEWALT in victory lane. I know it’s been a long time coming.”

What made you seek out the fan to give the flag to after the win?

“I was looking and I don’t see a lot of Christopher Bell shirts up there, but there is another one up there. It’s really cool to see a kid wearing my t-shirt. That’s really special. Hopefully he has a lifelong memory. Man, I love this place.”

How much did you learn in today’s race for tomorrow’s Cup race with no PJ1 on the track?

“I think these weekends with no practice and qualifying, you’re not sitting in the car until they drop the green flag. This is a really big advantage, especially coming here, the Xfinity Series rules package is really similar to the Cup Series rules package. Hopefully, it will be pretty similar and I hope that we have a really fast Camry tomorrow. Just really proud to be at Joe Gibbs Racing. Everyone here does an amazing job.”

Have you ever won your first three races at a track before?

“I’m not sure, but New Hampshire Motor Speedway sure has been good to me. I love coming up here.”

How difficult was it to stay up front throughout this race?
“That last restart was really tough. I was just taking off really loose so Justin (Allgaier) was able to stay right on my left rear and made it tough to where I couldn’t get off the corners very good. Man, once this thing got some laps underneath of it, we were really, really fast. Can’t thank Chris Gayle (crew chief) and everyone on this No. 54 group to bring such a strong DEWAL  Supra to the race track. It’s just an honor to be able to drive really fast race cars.”

Are you campaigning for a piece of granite after your streak of success at this track?

“We’ll have to see. This place has been fun. Thank you to all the fans for coming out today and I’m sure we’re going to have another good race tomorrow.”