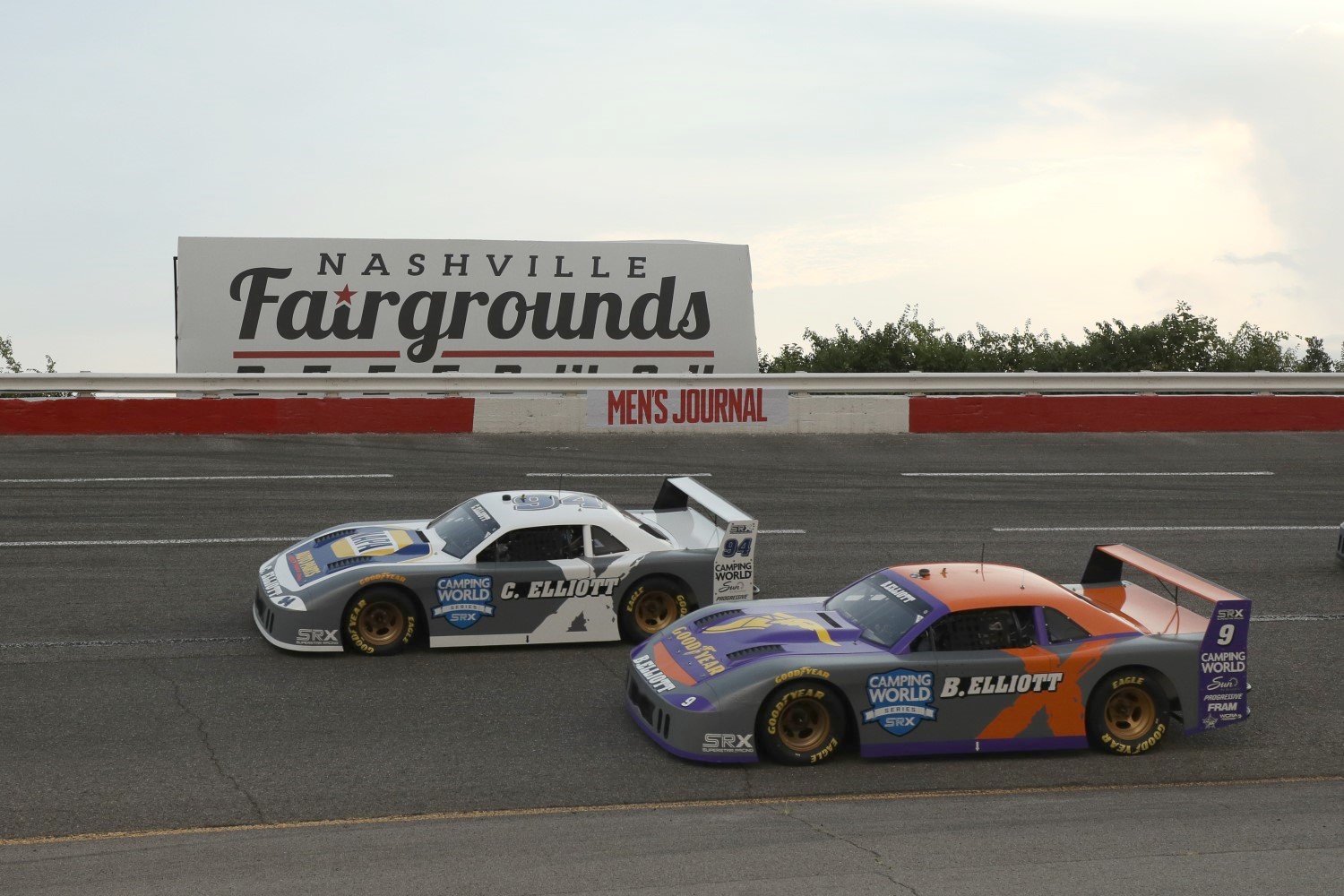 Elliott crossed the stripe .439 of a second ahead of Stewart after battling his father, Bill, for much of the 77-lap race around the .596-mile oval in Music City.

Chase started fourth in his No. 94 machine and by lap 32 was second to his father, who led from the start. Chase took the lead from Bill for the first time on lap 53, only for Bill to take it back a lap later.

“I don’t know who lit a fire under him,” said Chase about his father. “I had not seen that in him in years. It was amazing and a lot of fun. I thought it was going to be between he and I. I think he just got a little high into one and missed that restart. Other than that, it was so much fun.”

As the two continued to race side-by-side, Chase crossed the stripe ahead of Bill on lap 55 and then never relinquished the point. That didn’t mean Chase wasn’t challenged.

Stewart, who clinched the Camping World SRX Series championship before the second heat race ended, drove from fifth in the 12-driver field to begin engaging the Elliotts just past the midpoint of the race. Stewart passed Bill for second on lap 61 and promptly set his sights on Chase. While Stewart got close, Chase held onto the lead and held off Stewart.

“How could you ask for more than to finish between two Elliotts?” Stewart said. “That’s pretty badass in itself, and we really appreciate NASCAR and Hendrick Motorsports for letting Chase come run with us. It means a lot to us, it means a lot to Bill.”

Chase’s car number for the race was No. 94, which holds a special place for him and the entire Elliott family.

“My late cousin Casey Elliott ran the 94 for years and years,” Chase said. “It’s always special to run that number and glad we could get it into victory lane here at Nashville.”

Both Chase and Bill had prior experience at Nashville. Chase raced at the half-mile speedway countless times in a Super Late Model, winning the prestigious All American 400 in 2013. Bill competed in seven NASCAR Cup Series races at the track with a best finish of fifth in the 1983 Marty Robbins 420.

“I didn’t need to happen what happened there (on the final restart). I just didn’t get all the stuff off my tires like I needed to. I just rolled up the hill, I was in it, then I got in it, then I was fighting. I was trying to get back to Tony but then I lost my drive up off and I was really having a hard time controlling my wheel spin up off the corner,” said Bill, the 1988 NASCAR Cup Series champion who won the night’s first heat race by .218 of a second over Chase.

“Man, I tell you what, it was a lot of fun. I knew the way the tires were on these cars and the way Chase manages his stuff, he was going to be hard to beat. I know he didn’t have the best car, but he knows how to get it to the end.”

Nashville marked only the second time Bill and Chase had raced against each other. The first time came on Oct. 20, 2013 in the Alabama Pro 125 Late Model race at South Alabama Speedway, where Chase won and Bill finished fourth.

“I’ve raced here before and I kind of had an idea of what I needed, and I think that helped as much as anything,” Bill said. “It was such a cool deal to be able to come here and do this and have a crowd like this.

“For me, I finally got what I wanted out of a racecar and I felt good out there. I thought, I’m on Medicare and I’m trying to keep up with these young kids. You’re trying to learn and gain, and every time you get into a racecar you learn something, you learn from your mistakes. Not being in one in a long time and kind of making a mistake in turn one, not cleaning up my tires good, that was it.

“To me, it was a great night. My hat’s off to everyone at SRX for what they did and I’m proud of those guys. I just hope that we, as a racing community, can embrace this and learn from it, especially what we saw here tonight at the Nashville Fairgrounds. I haven’t seen a crowd like this here in many, many years.”

Stewart won the Camping World SRX Series championship by 45 points over runner-up Ernie Francis Jr. Two feature race wins, June 19 at Knoxville (Iowa) Speedway and June 26 at Eldora Speedway in Rossburg, Ohio, propelled Stewart to the championship, as he was the only multi-race winner.

“Winning this championship is awesome,” Stewart said. “I really appreciate Marcus Lemonis and everyone at Camping World for stepping up and helping us when we needed to get this thing off the ground, and all of our partners that have come on board. On all of these cars there are different sponsors, so a lot of people made this happen.

“You hate to point race, but at the same time with the two heat races to get points and know there was still the main event, it was very realistic to get this locked up in the heats. That was the focus, to get that done and out of the way to where, then, during the main event we didn’t have to worry about it. If we got wrecked or spun out or whatever, we didn’t have to worry about it,” Stewart said.

“This series had every variable that you wanted and looked for. You had good racing, you had different winners, you had awesome crew chiefs, awesome ringers, awesome local track champions. To have heroes and villains in the series, I don’t know how you can ask for more than that.”

The race’s 77-lap distance was a nod to country music star and Grand Ole Opry regular Marty Robbins, who raced at the Fairgrounds in the late 1960s driving his iconic purple-and-yellow No. 777 Plymouth Belvedere, primarily in in the Modified and Sportsman classes.

“The ghost of Marty Robbins is here somewhere,” said Ray Evernham, co-founder of the Camping World SRX Series and the man who restored Robbins’ racecar. “His number was 777, so we picked 77 laps for the race distance, and then that caution flag with seven laps left, that was for Marty. People ask what all the cautions are for, and I say it’s to close the field up. And they ask when are you going to throw them, and I say whenever I feel like it.”

The Camping World SRX Series featured world-class drivers from an array of motorsports backgrounds competing in identically prepared racecars on some of the most iconic short tracks in America. The six-race short-track series culminated at Nashville after opening its season June 12 at Stafford (Conn.) Motor Speedway. It then visited back-to-back dirt tracks at Knoxville and Eldora before returning to pavement July 3 at Lucas Oil Raceway near Indianapolis ahead of its penultimate event July 10 at Slinger (Wis.) Speedway.

“The part of it I’m really impressed with is how well this team has adapted, come together, to prepare cars every week and how much fun the drivers have had, which is something I was really hoping for – the drivers have fun and the fans have fun,” Evernham said. “And it has been very humbling the way this has been supported by the fans. We’ve put on a good show. I feel like we’ve done a good thing for some of the short tracks across America, and some of those towns that needed a little bit of an economic boost. You bring national television to a town, that’s good, and just the support that we’re getting from the fans. If they’re telling me it’s good, I’m happy, because it didn’t matter whether or not I thought it was good. And every time you have a good idea, you’re wondering if it’s really a good idea or just that I think it’s a good idea. But the fans like it and that’s been the best thing for me.”

All the races were broadcast live on the CBS Television Network and streamed on Paramount+ Premium.