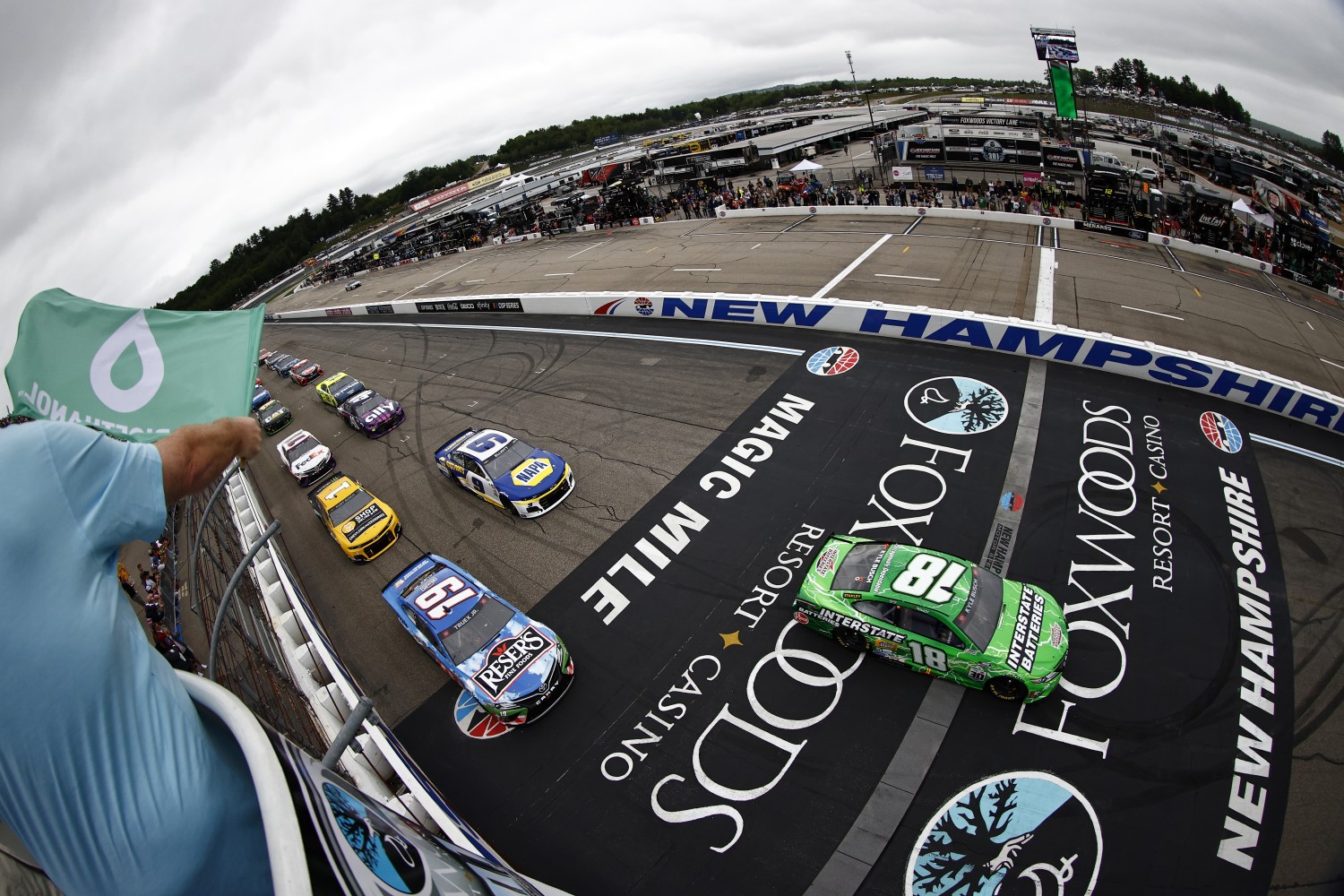 The NASCAR Cup Series has its 13th different winner of the 2021 season through 22 races.

Aric Almirola won Sunday’s Foxwood Resort Casino 301 at New Hampshire Motor Speedway by 0.697 seconds. The No. 10 Stewart-Haas Racing Ford led 25 of the 293 laps around the 1.058-mile track as the race was shortened due to darkness.

“This is by far one of my favorite race tracks,” an elated Almirola said after taking the checkered flag. “I love coming up to the New England area and racing. I love this race track. I had this race won a couple of years ago, and I gave it away—I lost it. And I am so glad to win a race here with this race team.

“It’s so good, man. We’ve been through so much, and I just stood the test. Everybody has just been working so hard… There’ve been so many people who have continued to support us through the crappiest year ever. Man, this feels so good for them. My pit crew did a phenomenal job on pit road. There’s no doubt we’ve struggled, but guess what? We’re going Playoff racing.”

It helped Almirola’s cause that NASCAR cut the race eight laps short of the scheduled 301 circuits because of darkness, a move necessitated by a rain delay that commenced after eight laps had been completed and Kyle Busch’s polesitting car had been wrecked beyond repair.

Bell thought an extra eight laps might have made the difference.

“I didn’t know how many laps they cut it short, but definitely whenever I saw the board and saw that we were eight laps short, it stings, man, because I feel like I probably had a little bit better pace than him, and I was able to get to him,” said Bell, who won Saturday’s NASCAR Xfinity Series race at the track.

“I know lapped cars were giving him a bad time, but I was able to get to him, and it was going to be a heck of a race.”

Penske teammates Keselowski, Joey Logano and Blaney ran third, fourth and fifth, respectively, with Logano recovering from a two-lap penalty incurred during the rain delay. Nicked for the two circuits when  a crewman worked on his car during the red-flag period, Logano used two free passes under caution to his advantage.

Kevin Harvick finished sixth after winning the first stage and leading a race-high 66 laps, the first time since May 9 at Darlington the driver of the No. 4 Stewart-Haas Racing Ford had been at the front of the field.

Ford drivers claimed five of the top six finishing positions, with Bell in a Toyota being the only exception. Kyle Larson, Ross Chastain, Alex Bowman and Denny Hamlin completed the top 10.

Almirola’s victory set up a battle between Richard Childress Racing teammates Tyler Reddick and Austin Dillon for the 16th and final Playoff berth. Both were comfortably situated in points before the race, but Almirola’s win reduced the number of available spots in the postseason from four to three.

On Lap 6, as rain began falling with sudden intensity, frontrunner Kyle Busch spun into the Turn 1 wall, crushing the rear of his No. 18 Toyota. Joe Gibbs Racing teammate Martin Truex Jr. suffered a similar fate on the wet track, damaging the front end and splitter of his No. 19 Camry.

Hamlin spun behind Busch and Truex, making slight contact with the No. 48 Chevrolet of Bowman, but Hamlin had more time to react after witnessing the ill fortune of his JGR teammates and escaped major damage.

NASCAR officials were surprised at how quickly mist turned to hard rain rendered the track too treacherous to continue the race.

“As (race director) Tim Bermann is about to put out the yellow, we look down and (Busch) is already getting loose,” said NASCAR executive director and chief racing development officer Steve O’Donnell.

“I’ve been here a number of years. That’s the first time I’ve seen that in terms of how quickly it came upon us. Certainly mist, we’ve raced in mist conditions before. The track got slick, obviously, in a hurry, and it was unfortunate what took place.”

The wreck eliminated Busch from the race in 37th (last) place. Truex recovered to finish 12th.

Logano suffered corollary damage when debris from the track stuck in the throttle linkage and prevented the throttle from opening fully. Because a crew member began working on the car before the red flag was lifted, Logano incurred the two-lap penalty.