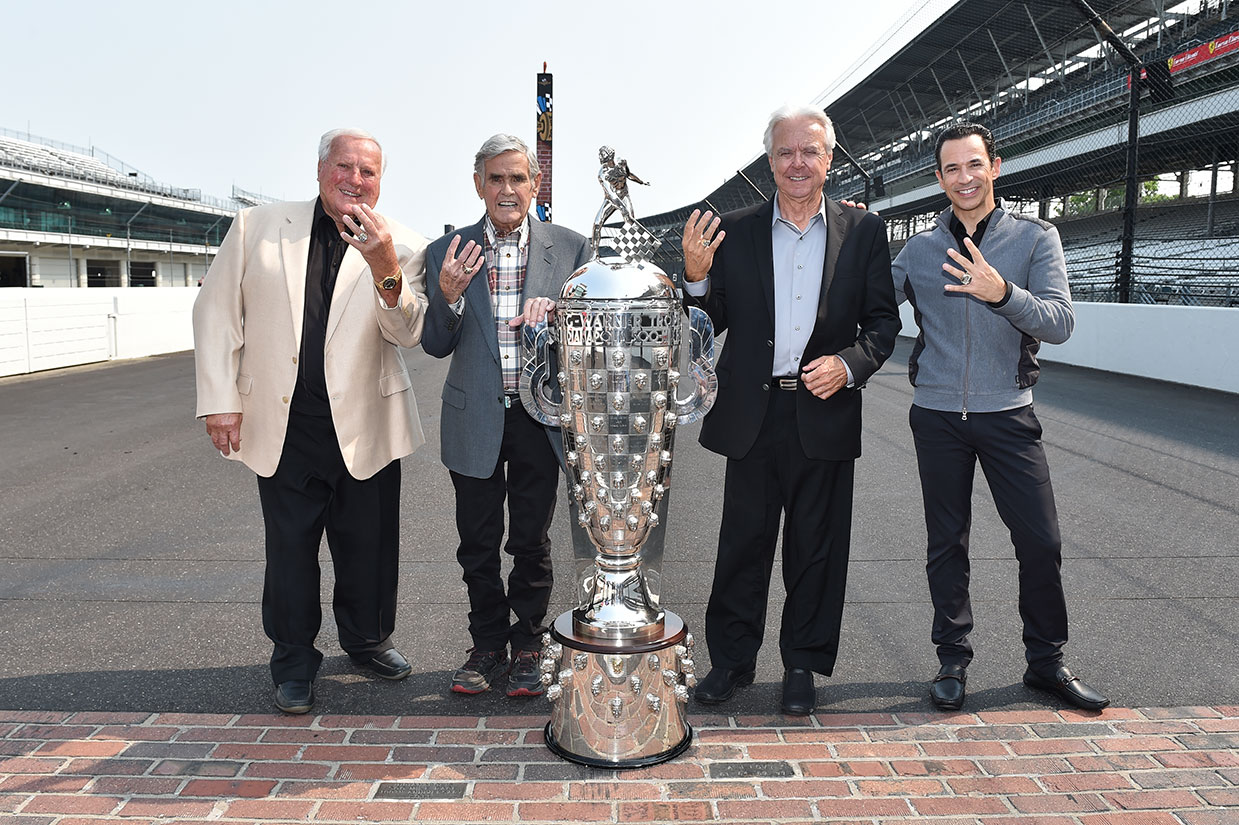 A.J. Foyt, Al Unser and Rick Mears, the first race car drivers to win the Indianapolis 500 four times, have been photographed together many times over the years, including a famous session for the cover of the event’s official program in 2013.

But with each passing year, it seemed those images might stand as a permanent reflection of Indianapolis Motor Speedway’s most prestigious club. After all, 29 races were held following Mears’ fourth “500” in 1991, and while a few drivers earned their second win during that time, only Helio Castroneves and Dario Franchitti notched a third. Franchitti ran his last “500” in 2013, the year after scoring victory No. 3.

With so much parity in the NTT INDYCAR SERIES and Castroneves turning 46 prior to this year’s race and switching teams – from Team Penske to Meyer Shank Racing – the odds of him winning a fourth didn’t seem as good as they had been in years past. But when Castroneves held off Alex Palou for the victory in the 105th Running on May 30, everyone knew a new gathering of “The Club” needed to take place.

That meeting was held Tuesday in Indianapolis. And yes, plenty of new photographs were taken. IMS photographer Chris Owens said he literally took thousands, more than he’d take on a normal race day.

Castroneves has experienced a wide range of emotions in the two months since wildly celebrating on the front straightaway, but spending the day with Foyt, Unser and Mears made it all the more magical.

“What else can I say, these guys since I’ve been here, they’ve been the standard of Indianapolis,” he said with the legends sitting to his left at an IMS conference table overlooking the track. “I’ve always been looking after those guys. For me, I still can’t believe it. Every time I’m with them it blows my mind. They helped me to set the goals, and I really pushed for it.”

Castroneves struggled to put in words what winning the Indianapolis 500 presented by Gainbridge means to him. Saying it put him in “cloud nine” doesn’t do it justice, he said.

Castroneves even gathered a winner’s ring from each driver, lining them up on the table to be photographed.

“Mine is the one still shaking,” he said. “It’s too excited.”

Mears, who was Castroneves’ spotter for his first three wins here, seemed to smile with every word the Brazilian spoke, particularly those made out of respect to the legends he has joined.

“I kind of know how he’s feeling because I’ve heard him say a little bit about it,” Mears said. “When I won my fourth, to get up here with two of my heroes, even though the (number of Indy wins) were the same, I was still not in their category. To be with them was incredible, and I’m pretty sure Helio feels the same way.”

Said Unser: “It’s nice to be called a hero.”

Castroneves asked the other drivers what to expect as a four-time winner. As usual, Foyt was the most blunt.

“No different than if you win it once,” he said. “You got your first one; that’s what counts.”

The significance of the gathering of Indy legends can’t be understated. Even in motorsports, where speed is the ultimate pursuit, time waits for no one. Foyt is 86, Unser 82, Mears 69. All three have attended fewer INDYCAR races with each passing year.

Yes, all three were at IMS during the recent Month of May, but Unser left the track with about 10 laps to go to beat the traffic as he caught a flight home to New Mexico.

‘’He knew I was going to win, no matter what,” Castroneves said with a laugh.

While Foyt was on his team’s pit stand at the end of the race, he hadn’t been feeling well, so he didn’t stick around for the celebration. Mears had left his perch in the IMS Pagoda to watch the final dozen or so laps in the quiet of Team Penske’s Gasoline Alley garage, which took him out of the public eye at the finish.

But make no mistake about it: All three were cheering for the popular Castroneves.

“(As a driver) you want to continue winning if you’re going to race, but if you’re not going to race then you cheer for someone like Helio to make it happen,” Unser said. “Hopefully, if he’s your favorite, he does it. If not, goodbye Charlie.”

IMS owner Roger Penske, whose Team Penske organization fielded Indy-winning cars for Mears (four), Castroneves (three) and Unser (one), joined the conversation via video call from his office in Detroit.

“What a great day!” said Penske, whose team has won the race a record 18 times. “I can’t wait to get an autographed picture from each one of you. It will be special in my office.”

Track president Doug Boles noted that 784 drivers have started the “500” and only 20 have won it more than once.

“Some days the racetrack smiles on you, and some days you have it the other way,” Unser said. “You never think you’re going to win because your chances are very slim. There’s 32 other guys who want to win as bad as you do.”

The other aspect of “The Club” is that for a period of time it seemed less exclusive. While it took 61 years for Foyt to become the event’s first four-time member in 1977, Unser matched him 10 years later and Mears did so only four years after that. Then in quick fashion Emerson Fittipaldi and Al Unser Jr. became two-time winners.

Even Castroneves, who made his IMS debut in 2001, seemed to be on the fast track to membership, winning the race in his first two attempts and then achieving No. 3 in his ninth start, in 2009. But while he came close to a fourth on a couple of occasions – he won the pole for the 2010 race and finished second to Ryan Hunter-Reay in 2014 and Takuma Sato in 2017 – victory lane eluded him 11 straight years. He was running out of chances. Hence, the elation after crossing the finish line.

“Forget about the person, the (winning) driver,” Castroneves said. “After the pandemic and to have so many people back (at IMS), making history, giving a first-time win for a team that’s never won, and my personal thing getting my No. 4. When you put all the emotions and scenarios together, it was just a very special event.”

Castroneves asked about a membership fee for the four-time club. He said he hoped at a minimum there would be a card he could carry around.

Said Mears: “The fee will triple if you win five.”

It should be noted that Foyt, Unser and Mears all took shots at a fifth only to come up short. Foyt made 15 attempts after his fourth win, finishing second to Mears in 1979 and scoring five additional top-10 finishes. Unser made five more starts after his fourth, with third-place finishes in 1988 and ’92. Mears took one more shot in 1992, but a mid-race accident spoiled his record-setting bid.

Yes, a fifth “500” win can be achieved, but it won’t be easy. However, if someone scores it, it won’t be difficult to arrange the photograph.

“Records are made to be broken, that’s how you’ve got to look at it,” Foyt said.

“Just remember,” Mears told Castroneves, “if you get five, you’ll be lonely.”