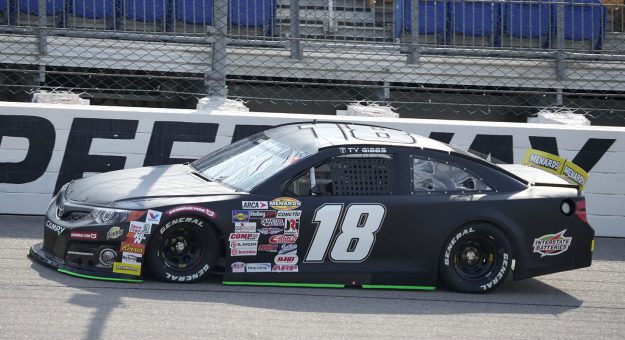 Ty Gibbs spent the first half of the 2021 ARCA Menards Season trying but failing to surpass Corey Heim for the lead in the championship standings.

The 18-year-old began the second half of the season accomplishing just that.

The driver of the No. 18 Joe Gibbs Racing Toyota dominated Saturday night’s Shore Lunch 150 at Iowa Speedway, leading all but one of 150 laps en route to his sixth ARCA Menards Series win of the season.

Heim held the points lead through the first 10 of 20 races on the schedule after winning the season-opener at Daytona International Speedway. This despite the fact that Gibbs had won more races and more pole awards; he even tied Heim for the points lead after qualifying on the pole at Pocono before the latter won the race.

And he had fun doing it.

Make that SIX wins in the ARCA Menards Series this season

“You’re almost a painter here,” Gibbs said of racing at the unique, 0.875-mile oval. “You’re just working the brush on a canvas. There’s so much room to work with. It’s a Phoenix (Raceway); it’s an Atlanta (Motor Speedway). There are so many different places to go (on the track). The top, the bottom — you’ve got everywhere. All of the bumps; so many characteristics to this place.”

Gibbs made history Saturday night at Iowa in addition to his triumph in the standings. The winner of last year’s Shore Lunch 150 at Iowa, Gibbs became the first multiple-time ARCA Menards Series winner (and the first back-to-back AMS winner) at the D-shaped track. The first 14 AMS races at Iowa dating back to 2006 produced 14 different winners.

Gibbs faced few challenges for the lead Saturday night; the one lap he did not lead was the result of Taylor Gray getting a good jump on a restart on Lap 25 before the eventual winner pulled away.

With that said, a valiant effort in the closing laps was made by second-place finisher Daniel Dye, who last week at Berlin Raceway became the first driver not named Gibbs or Heim to win an ARCA Menards Series race this season, doing so in just his second series start.

Dye closed Gibbs’ lead to a little more than a second for the last couple laps, but the latter’s lead was too great.

“I did everything I could,” said Dye. “(Crew chief) Chad Bryant made good changes all day. We were just a little far from where we needed to be. I about wrecked the car a couple times trying to reel in Ty. …

“I’m truly blessed. Like I said last week, this is a dream. I’m racing in front of 5,000 fans at one of the coolest tracks I’ve been to and finishing second to one of the best there is in ARCA. So, mad we didn’t win, but we’ll take it.”

Gray finished third ahead of Heim in fourth. Heim, who has four wins in 2021, made clear he was ready to quickly move on from Iowa.

“We definitely had our struggles tonight,” he said. “We really struggled to fire off on short runs, and it kind of came to us throughout the run, but we were just so far back at that point that we couldn’t really make it up.

“We’ve got a little bit of work to do, but I’m confident we can get there.”

Saturday night’s Shore Lunch 150 was a combination race with the ARCA Menards Series East, and the East Series points leader had a rough evening.

Joe Gibbs Racing driver Sammy Smith, who was racing at his home track, smacked the wall during a restart on Lap 37 and never recovered despite his team’s best efforts. He finished 18th, a result that shrinks his East Series points lead over second-place Diaz to 19 points.

The ARCA Menards Series will return to action next week at Indiana’s Winchester Speedway for the Calypso Lemonade 200 on July 31. The fourth consecutive Saturday night short track race for the series is scheduled to start at 8 p.m. ET; it will broadcast live on MAVTV Motorsports Network with a live stream available on NBC Sports Gold’s TrackPass.