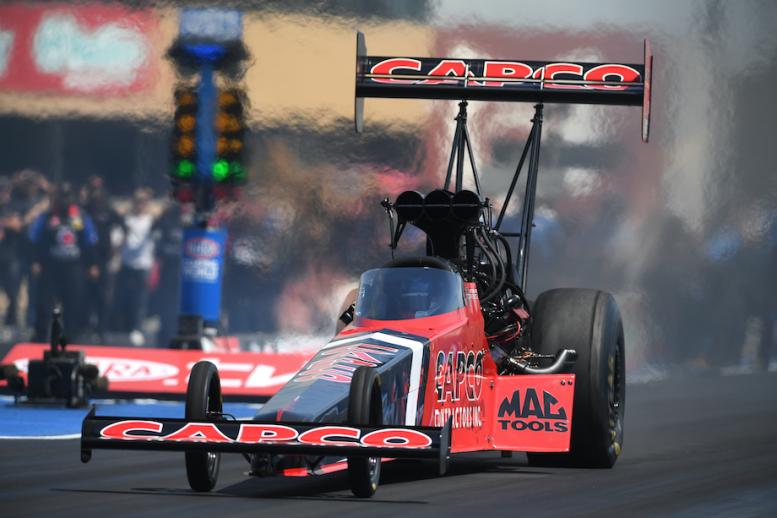 Steve Torrence defeated Leah Pruett in the finals to win the Top Fuel class in a very close Sonoma Nationals 3.757s to 3.768s

Even before the race day started Torrence had locked up his spot in the 2021 Countdown to the Championship. His win in Sonoma means his Capco Contractor’s Top Fuel dragster is two-thirds of the way to sweeping the 2021 Western Swing. Even if you overlook the Swing, this is already his third race win in a row (Norwalk, Denver, and now Sonoma). Now get this, Torrence disclosed after the race that he was able to get this win with an all-new car.

That’s right, what may have looked like qualifying struggles on Friday and in the first session on Saturday were in fact shakedown runs in a brand-new Morgan Lucas Racing chassis. In reality, Torrence was able to climb the qualifying ladder and secure the number two spot in the final session with an all-new car that was testing an all-new clutch setup.

Robert Hight and the Automobile Club of Southern California Chevrolet Camaro SS team dominated the NHRA Sonoma Nationals at Sonoma Raceway to take home their second win of the season. Brittany Force handled the Flav-R-Pac dragster to a quarterfinal finish while John Force and the PEAK / BlueDEF PLATINUM Camaro had an early first round exit.

The victory is the 53rd of Robert Hight’s career, putting him ahead of Joe Amato on the all-time wins list. It was Hight’s fourth total but third consecutive victory at Sonoma Raceway, his home track. Hight has been to every national event at the facility, first as a fan, then a crew member and now a driver.

“It was 1988, the first national event ever here, that’s when I fell in love with this sport,” Hight said. “It’s hard to believe it’s been this long and that I actually get to stand here and do this. When I first saw these cars run, it’s all I wanted to do. Amazing. A lot of good fans up here and let’s make it four in a row next year.”

Heading into eliminations in the No. 4 spot, Robert Hight and the Auto Club team kept up their consistency from qualifying with a 3.938-second pass at 320.28 mph that gave Steven Densham and his 5.079 at 148.23 the loss. Hight would then have to make his way through a gauntlet of former Funny Car champions for the victory.

Another Don Schumacher backed Funny Car would be waiting for Hight in his third final round of the season. Matt Hagan and Hight had a close side-by-side drag race in the finals. Crossing the line at 3.971-seconds and 322.50 mph, Hight would earn the Wally over Hagan’s 3.991 at 324.44.

“You look at the top eight in Funny Car, any one of these guys can win a championship and most of them are champions. It’s a tough class, even Steven Densham, his dad, Gary Densham, is a cagey old veteran, and you’ve got to be on your game,” Hight said. “It’s a lot of fun when you can get here and stand on the stage at the end of the day. This is three in a row here at my home racetrack.

“Just the way this Auto Club Chevy has been running all day long. Jimmy (Prock) and Chris (Cunningham) have this thing running on a string. We’ve got good luck here,” Hight said. “We had lane choice every round, so I just have a lot of confidence in my team. I have to have confidence in myself. Jimmy Prock, Chris Cunningham, they really brought their A-game. I think we learned some things this weekend, and maybe this Auto Club Chevy is back. It’s been an unbelievable weekend and we’re headed to Auto Club Raceway now.”

“Even though we had a second round exit this Flav-R-Pac / Monster Energy team had great performance all weekend long,” Force said. Our 3.694 Friday night Q1 run earned another No. 1 qualifier. First round on race day our 3.703 was low of the session. Unfortunately, in round two we got beat due to tire smoke and a mechanical issue. Luckily, we head straight to the next one in Pomona. I’m excited for a little change and to wrap this Western Swing at my home track, Auto Club Raceway at Pomona. I’ve won at this track in the past and I plan to do it again.”

John Force will remain within 43 points of the Funny Car lead in the No. 4 spot despite his first-round exit at the NHRA Sonoma Nationals. Force, who ran a 4.137-second pass at 290.57 mph that was bettered by J.R. Todd and his 4.032 at 321.27, had luck on his side as points leader Bob Tasca III also had a first round loss. Force would be bumped down by race finalists Matt Hagan and Robert Hight.

“Wasn’t our weekend over at the PEAK Chevy. It was a good weekend for John Force Racing, though,” said Force. “Brittany with Flav-R-Pac and Monster Energy getting another No. 1 qualifier and Robert with Auto Club picking up the win. We are all up there in points, all in the top five. That’s a good spot to be and now we get to go chase another win at home.”