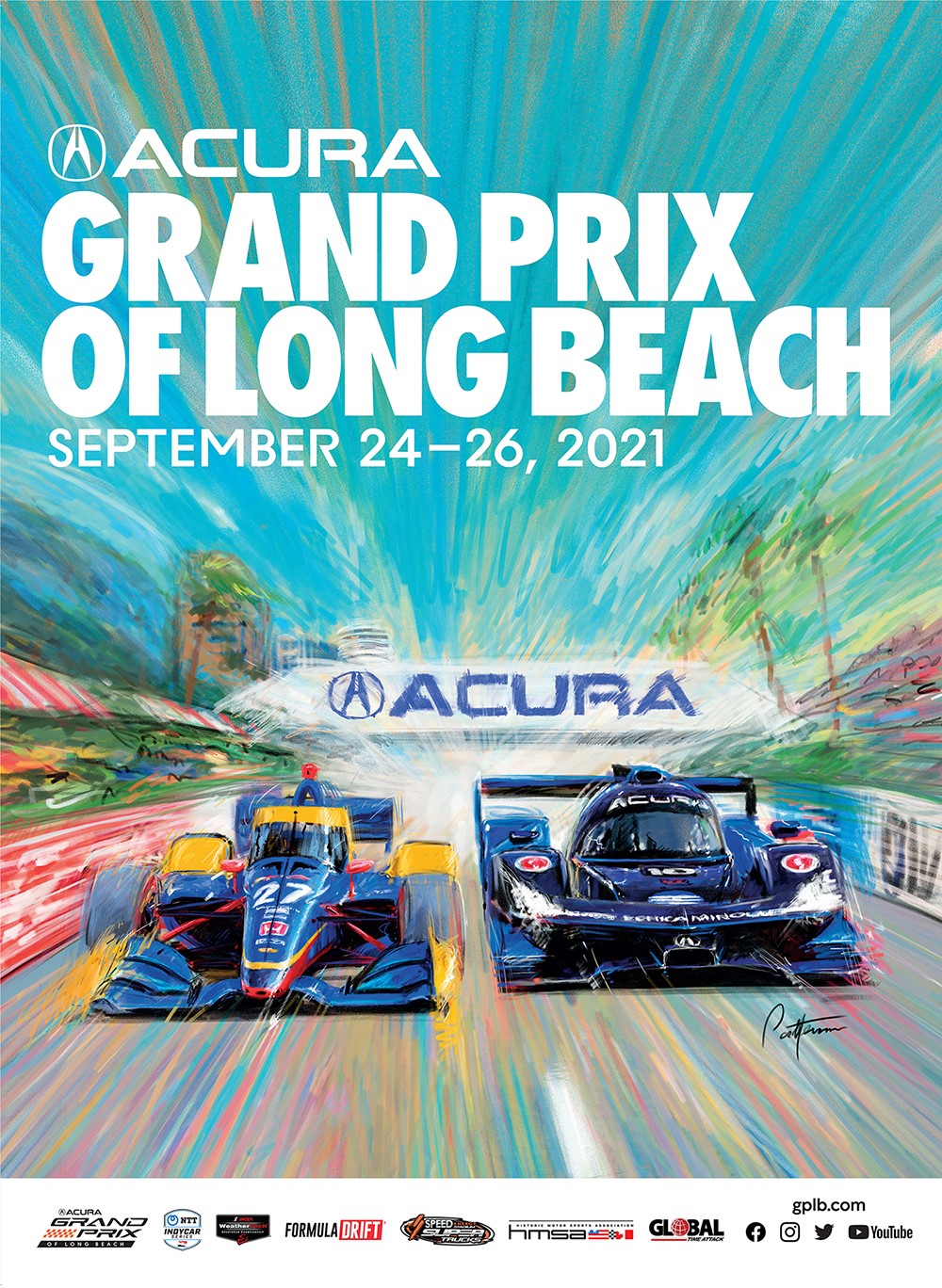 Patterson, a resident of Bulverde, Tex. who became hooked on motorsports when he saw his first race in Argentina at the age of 13, has also been the Official Artist of WeatherTech Raceway Laguna Seca since 2004.

For the Acura Grand Prix of Long Beach, Patterson’s colorful artwork illustrating an Indy car and IMSA DPi car racing on Long Beach’s world-famous front straightaway will serve as the official souvenir race poster. It will also appear on the covers of the race’s digital Fan Guide and Race Program, as well as official t-shirts.

“I am so delighted to be the artist for the 2021 Acura Grand Prix!” said Patterson. “To be included in the historical record of this iconic event is an honor and I love the finished image. I can’t wait to be back in Long Beach this year and absorb the sights and sounds – and turn that inspiration into a series of Live Art paintings.”

Drawn to downhill skiing at an early age in his native Wyoming, Patterson, who attended his first Grand Prix of Long Beach in 1988, immediately recognized in auto racing the same “edge” he knew from skiing. He describes it as the edge of precision, calculated speed and technical limits with infinite exhilaration.

Patterson is regularly commissioned by private clients for parties as well as corporate clients, such as Honda, Firestone, IBM, FedEx, Microsoft and Lamborghini, to perform “live art.” The 2021 Acura Grand Prix will also feature Patterson’s live art, as he will create original paintings in various locations throughout the racetrack during the weekend, including in his booth in Vendor Row outside the Convention Center. He will also be available at select times during race weekend to sign fans’ 2021 souvenir posters.

Ticket prices range from $34 for a Friday General Admission ticket to $155 for a three-day ticket that includes Saturday and Sunday reserved seating in grandstand upper levels.  Pre-paid parking packages are also available, along with handicapped seating, NTT INDYCAR SERIES Paddock access passes ($65 for three days or $27 per individual day), Super Photo tickets and an array of VIP Club packages.

Fans can select and pay for their 2021 Acura Grand Prix of Long Beach seats, parking and paddock passes online at gplb.com. Ticket orders can also be placed by calling the toll-free ticket hotline, (888) 827-7333.