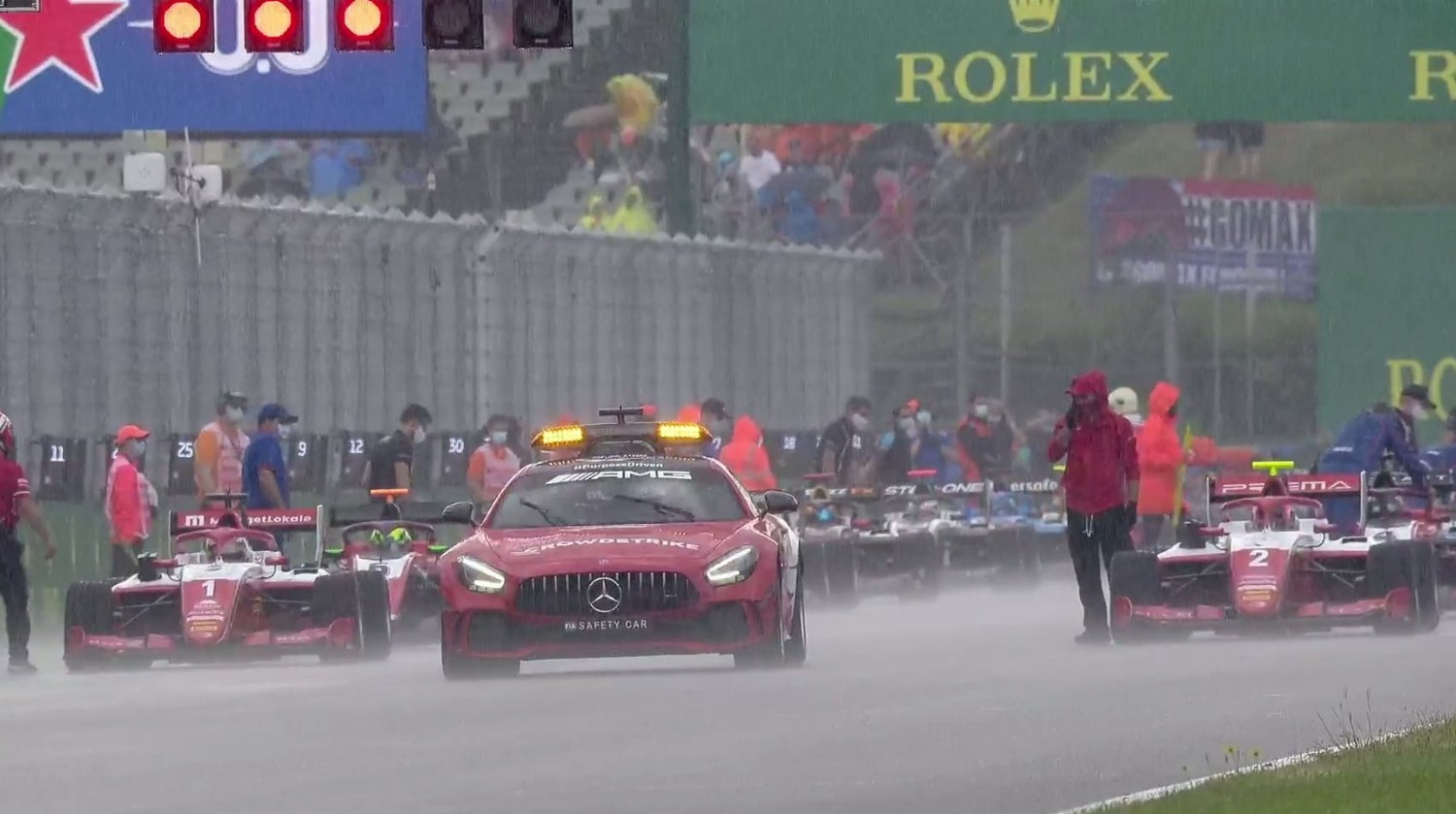 Dennis Hauger continued his relentless run of form in a rain-hampered Race 3 at Budapest, overcoming his polesitting teammate Arthur Leclerc to take a third win of the season and a sixth podium in just 10 races.

The Championship leader started from second but conquered the wet conditions quicker than those around him to pounce on Leclerc in the opening laps. The Monegasque driver adapted and fought back on a drying track, but a late Safety Car brought their battle to a close and led the field across the line.

Jack Doohan headed a trio of chilled out Trident drivers past the checkered flag in third, fourth and fifth, as the Australian racer made up for a scoreless Race 2 and returned to second in the Drivers’ Championship.

The remainder of the top 10 finished pretty much where they started, apart from Enzo Fittipaldi, who put on a peerless performance in the wet to charge from 17th to ninth.

With raining hammering down onto the Hungaroring circuit, the Safety Car led the field off the line for a rolling start. Leclerc was unchallenged on pole, easing away and into the lead as those behind him started searching for any spots of grip.

Victor Martins was yet to score a point in Budapest, but his dire weekend wasn’t about to get any better. The Frenchman got caught up in a scuffle with Oliver Rasmussen and ended up clipping the barriers. The Safety Car was called out, although Martins was able to get his MP Motorsport machine going again and shot into the pits for a fix up, returning in last.

The Safety Car headed in, but the drama continued with the field showing no fear on the rain-soaked tarmac. Ayumu Iwasa, Olli Caldwell and Logan Sargeant all traded places at the back of the top 10, with Iwasa gaining two spots and Sargeant losing two.

Dennis Hauger wasn’t allowing his rookie teammate space to breathe at the front of the race, hounding the rear of the Ferrari junior. The Red Bull prodigy had a go-around Turn 1 after a wobble from the Ferrari prodigy, but he couldn’t make the move stick.

Hauger refused to relent and a lap later made an audacious second attempt around the outside of his teammate at Turn 3, using all of his experience to drag ahead and steal the inside line. The Championship leader couldn’t build the gap that he would have expected to, though, with Leclerc lighting up the timing screens and remaining in tow.

The rain had relented, with the sun breaking through and track temperature up to 32 degrees. With the tarmac beginning to dry, Matteo Nannini risked swapping out his slicks. The HWA returned with a wobble but appeared to have made the right decision as Roman Stanek and Johnathan Hoggard were clearly struggling for grip and ran wide.

Stanek’s struggle continued, and the Race 2 podium finisher collided with Amaury Cordeel and the pair were thrown off-track. There was a further collision behind them, as Rafael Villagomez and Ido Cohen came to blows and the latter spun to a stop. Laszlo Toth’s Campos then collided with the stationary Carlin Buzz and brought out a Safety Car.

Cohen and Toth both clambered out safely, but with just four laps to go, the Safety Car led the field across the line. That brought an end to Leclerc’s pursuit of his teammate, although the Norwegian had just nicked the fastest lap and looked set to finally break away.

The duo crossed the line in first and second, with Doohan just under a second behind in third. The Australian’s Trident teammates David Schumacher and Clément Novalak followed in fourth and fifth, with ART Grand Prix duo, Alex Smolyar and Frederik Vesti, sixth and seventh.

Caldwell had managed to fight back to eighth as Ayumu Iwasa’s pace waned, and he dropped out of the top 10. Race 2 podium finisher Enzo Fittipaldi put on a dazzling performance to rise a mega eight places and steal P9 ahead of Sargeant.