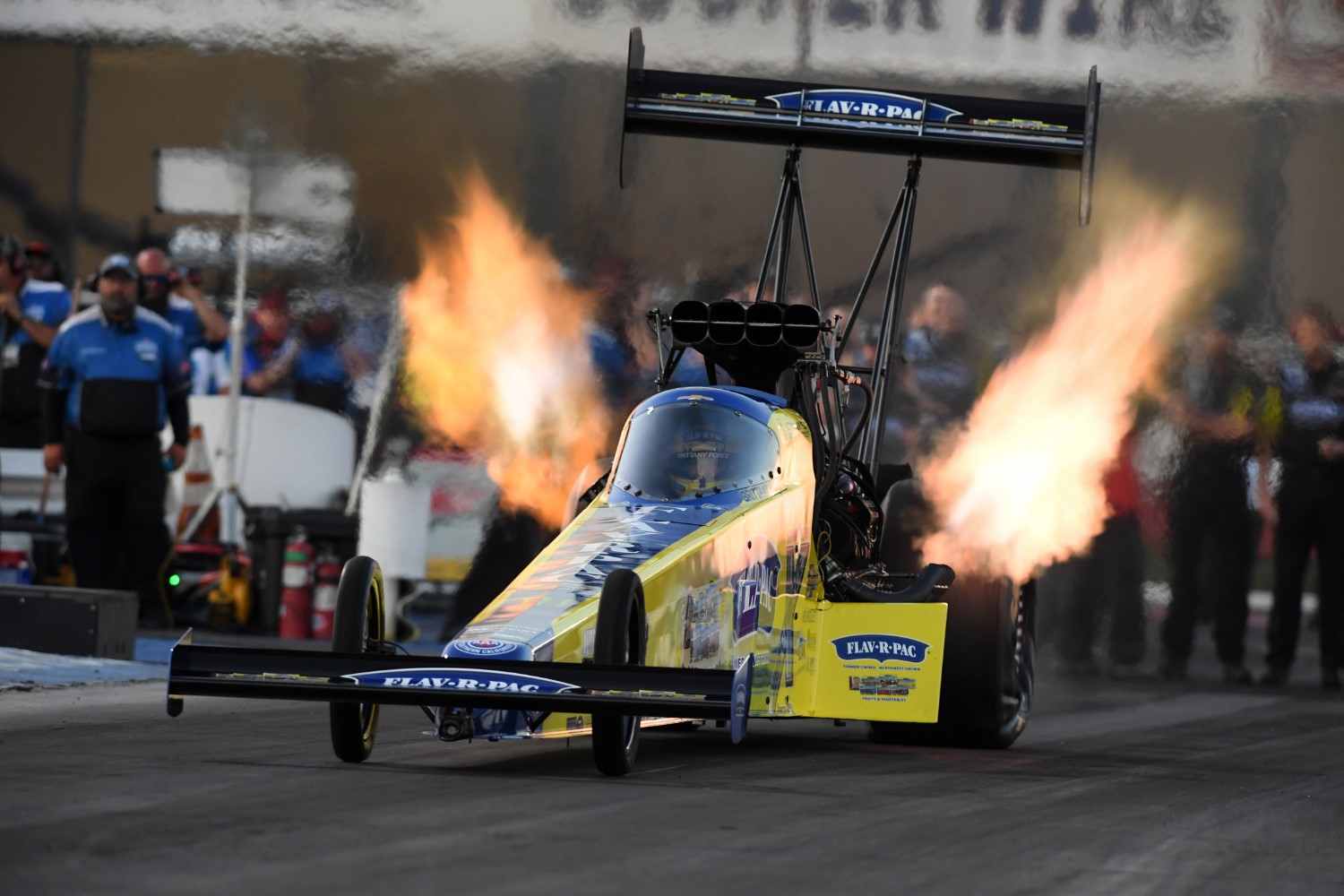 A frantic day of final qualifying at the Lucas Oil NHRA Winternationals set the fields for Sunday’s final eliminations at the ninth event of the 2021 NHRA Camping World Drag Racing Series schedule. Brittany Force (shown above) took over the qualifying lead in Top Fuel and Ron Capps the No. 1 spot in Funny Car while Greg Anderson (Pro Stock) and Matt Smith (Pro Stock Motorcycle) held onto their Friday leads.

Daytime track temperatures soared north of 140 degrees, leading to most fruitless passes in the day’s afternoon session as teams tried to glean data for Sunday’s daytime final eliminations, but most met with frustration and aborted attempts.

Force, who didn’t get down the track in Q1 and lost her important Q2 run to an inadvertent safety-system malfunction, powered her Dave Grubnic-tuned Flav-R-Pac dragster to a stunning last-ditch 3.714 in the final qualifying session, a run that was more than seven-hundredths quicker than Mike Salinas’ 3.790, and gave her team a sweep of Western Swing No. 1 qualifying efforts.

“Honestly, we’ve been going back and forth on our strategy. Our problem is we qualify really well, and we grab that No. 1 qualifier, but we struggle on race day. And lately, it’s just been the smallest mistakes that have cost us the runs on raceday, just simple mistakes that we need to figure out before we get into this Countdown. But we’ve been going back and forth with strategy on how hard do we want to push it on the racetrack. Do we want to take risks? Or do we want to pull back and keep it safe and know we get the show?

“This weekend was actually tough for us because we only made it down on the one run in the best conditions and now we’re going to the heat tomorrow, so it’s going to be tricky, but with David Grubnic, Mac Savage, and FLA-r-pAC guys, I always my confidence in them.”

Friday leader Leah Pruett (3.780) ran a pair of 3.9-second elapsed times and couldn’t hold onto the pole but nonetheless finished second just ahead of Salinas.

Points leader Steve Torrence, who’s gunning for a sweep of the Western Swing after wins in Denver and Sonoma, got off to a slow start with two aborted passes, then fired off a respectable 3.808 on his final lap to reach the No. 4 spot

A number of other top teams have struggled in the heat, including three-time world champ Antron Brown, whose best of 5.25 has him mired in the No. 11 position that earned him a tough first-round date with Torrence.

Capps qualified his NAPA Auto Parts Dodge No. 2 for the second straight race and for the third time in the last four events, as he overtook Friday leader Blake Alexander’s 3.961. Capps, who entered the day as the No. 4 qualifier, was one of only two Funny Car drivers to make two three-second passes and his final 3.941 earned him his 29th career pole position.

“Tomorrow is going to be new territory for a lot of crew chiefs and drivers,” Capps assessed. “So it makes it exciting, but the feel it is such a different track. The track is dry and it’s just it’s been so difficult to get down. We run [Bobby] Bode in the first roud tomorrow and I think the advantage a lot of times goes to these cars that are part time cars that have the five-disc [clutch] and just kind of go down the track and a car like ours is making a lot of power. And now instead of cutting the light, you got to think ‘OK, I’ve got to be ready because it’s gonna blow the tires off more than likely.’

“It’s gonna be interesting. I think you’re gonna see a different look on people’s faces, drivers and crew chiefs. And you’ve seen in a long time, I think this track is really brought out a little extra. These are the kind of trophies you want.”

Robert Hight, the other driver with two threes in his hand, finished No. 2 for the second straight day despite improving from his Friday 3.962 to a 3.953. Alexander slipped to third, still one of his finest showings with Cruz Pedregon in the No.4 spot with his Friday 3.967.

The tricky conditions challenged many of the top teams, including John Force, who ended up No. 12 with a 4.28 best, and Tim Wilkerson, who placed 13th. The 16-car bump of just 4.682 is a testament to the tough conditions.

Anderson not only held onto his Friday Pro Stock lead but actually improved on his Friday-leading 6.588 with a 6.586 to capture his 113th career No. 1 qualifying position.

“I wish we could have run the race at night, what I wish I could say quite a difference from the afternoon run to the night run on a racetrack, I guess about 40 degrees of track temperature and15 degrees of air temperature, and it definitely makes all the difference in the world,” said Anderson. “But unfortunately, it’s not going to get us that trophy tomorrow, That Q2 run that we had today. That’s the type of run that we’re going to do a little bit better than we were second for the session on that run, which certainly isn’t bad, but that’s not going to get the job done.

“I definitely like my chances Sunday. It doesn’t absolutely guarantee you win doesn’t guarantee anything, but I like it a lot. And I’d much rather go into race day at the top as No. 1.”

Erica Enders, who actually outperformed Anderson in the hot Q2 session, 6.646 to 6.652, couldn’t also better him in the cooler conditions as her 6.608 fell well short of knocking him from the top spot as her Friday 6.590 remained her run of record. Matt Hartford remained in the No. 3 spot with his Friday 6.593 after a Saturday best of 6.654.

Troy Coughlin Jr. made a move in the cooling evening session, improving from a 6.626 Friday to a 6.599 and up into the No. 4 spot. Deric Kramer, who hadn’t made it down the track on either of his first two attempts, finally got a good pass down with the Get BioFuel Camaro, clocking a decent 6.631 to grab the No. 8 spot.

Smith speculated Friday evening that under the right conditions he could exceed 200 mph in the final session, and he did not disappoint, improving on his Friday-leading 6.806 with a stunning 6.760 at 201.91 mph for his third No. 1 of the season and the 46th of his career. The speed is a new track record, exceeding the 201.22 he registered at the 2018 Auto Club NHRA Finals.

“Well, the biggest thing is, we got behind on schedule, so we ran a little bit later than we thought and more cars had been going up and down the track for a day now. So the track’s gotten better. Once the sun got off of it, and it was pretty tight out there. And I was really scared. We were going to bog and not have a good run, it hooked and made a run.

Former world champ Angelle Sampey, who lost her first run Friday when her bike had to be shut off after the burnout then lost her second run when she crossed the centerline, rebounded superbly in Q3 with a 6.830 that carried her all the way to the No. 2 spot and past Smith’s teammate, Scotty Pollacheck.

Sampey’s Vance & Hines teammate, Eddie Krawiec, also made a big move, running 6.843 to improve on a previous best of 6.903 to jump to also leapfrog Pollacheck into the No. 3 spot. Pollacheck ended up fourth despite also improving in Q3 with a 6.848.