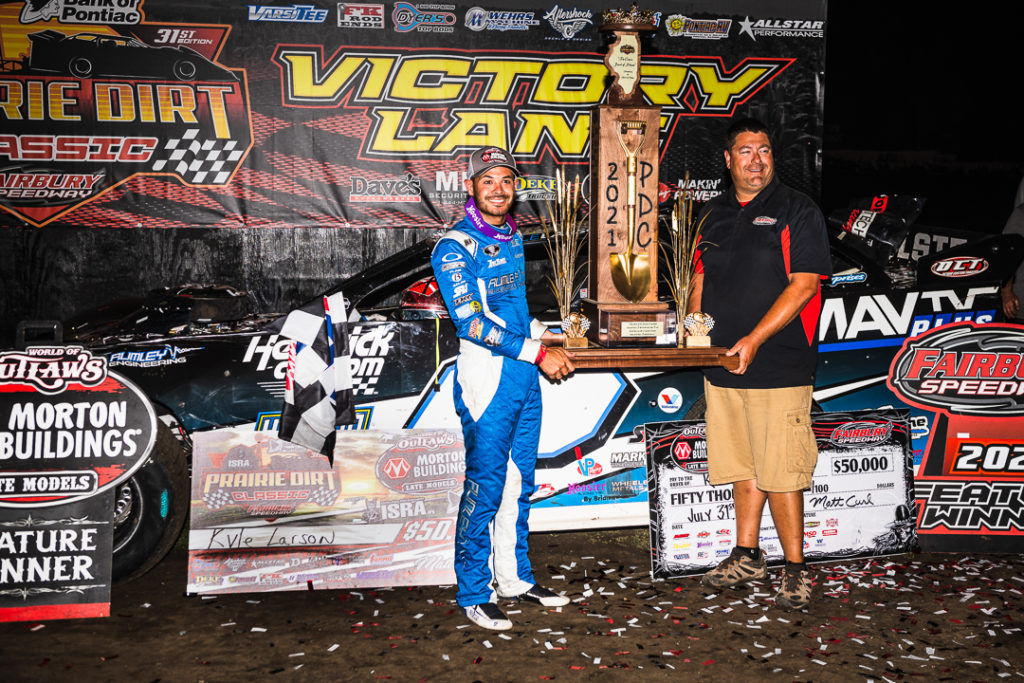 The Cancel Culture failed to cancel Kyle Larson and once again he has shown them ‘the bird.’

Kyle Larson has made several trips to Victory Lane in his career on both dirt and asphalt. But he celebrated like it was the first time after winning the 31st Prairie Dirt Classic Saturday at Fairbury Speedway.

The Elk Grove, CA driver, climbed to the roof of his car, grabbed two checkered flags, and waved them back and forth with excitement after holding off Bobby Pierce for the $50,000 prize.

“Yung Money” methodically worked his way to third from his seventh starting position, making his move for the lead on a Lap 27 restart. He dove to the bottom of the speedway, sliding up in front of Pierce as the Fairbury Speedway crowd let out a thunderous roar.

Even though Larson led the final 70 laps of the Morton Buildings Feature, Pierce tried to chase him down until the end. The Oakwood, IL driver started closing in during the last 15 laps before Larson moved up a lane and drove away.

“I saw the big screen, and [Pierce] was getting close to me, so I knew I had to get up on the wheel,” Larson said.  “I didn’t want to run the cushion all the way around the corner because I kept hitting the wall the last two days. So, I just decided to slide myself, and gosh, my car was really good.”

“To come to the PDC, a race that I never thought I’d get the opportunity to race at, it feels awesome.  To win a Crown Jewel in Late Models after winning my first Crown Jewel in Sprint Cars a couple of weeks ago, it’s awesome. “

Pierce held on for second after trying to catch Larson in the race’s final stages. The “Smooth Operator” stated he still needed to be perfect toward the end, even though he carried a lot of momentum.

“Once we got going, I built my momentum up, I was catching him, and every lap was getting closer and closer,” Pierce said. “I thought if he stays down, we might have a shot, but I have to hit my marks perfectly. In that timeframe of me catching him, I think I was just hitting it perfect every corner, and he moved up. One lap later it could’ve been interesting.”

Shannon Babb, from Moweaqua, IL finished third, coming up short in his quest for a fourth Prairie Dirt Classic win. He hoped lap traffic would work in his favor allowing him to catch the top two.

“The track changed a lot tonight, and we knew our car was going to be good on the bottom, but it was good everywhere,” Babb said.  “We could definitely gain ground there at times, but we were just waiting to see what was going to unfold if the lap traffic would block them guys in.”

Chris Madden crossed the line fourth after charging into the top-five during the second half of the race. “Smokey” waited for the right moment to pounce and move up through the field until a late-race caution stopped his momentum.

“I planned on just biding my time and not wearing my stuff out and letting them guys go to begin with,” Madden said. “We just picked them off here and there and had a really good race car, but I kind of let my right rear seal up on me [under caution], and I couldn’t get back going after that.”

Three-time and defending Series champion Brandon Sheppard finished fifth. The New Berlin, IL driver, was disappointed with how the night went, despite grabbing another top-five finish.

“Really late in the race when my car came to me, I was a few spots too far back,” Sheppard said. “We just had to make the most out of it and made a few passes on the restarts and just came up short. It’s disappointing because we had a better car than where we finished.”

The Prairie Dirt Classic isn’t Kyle Larson’s first win, nor will it likely be his last. But taking the checkered flag at Fairbury Speedway is a feeling “Yung Money” will remember, as he tastes World of Outlaws Late Model glory for the first time.