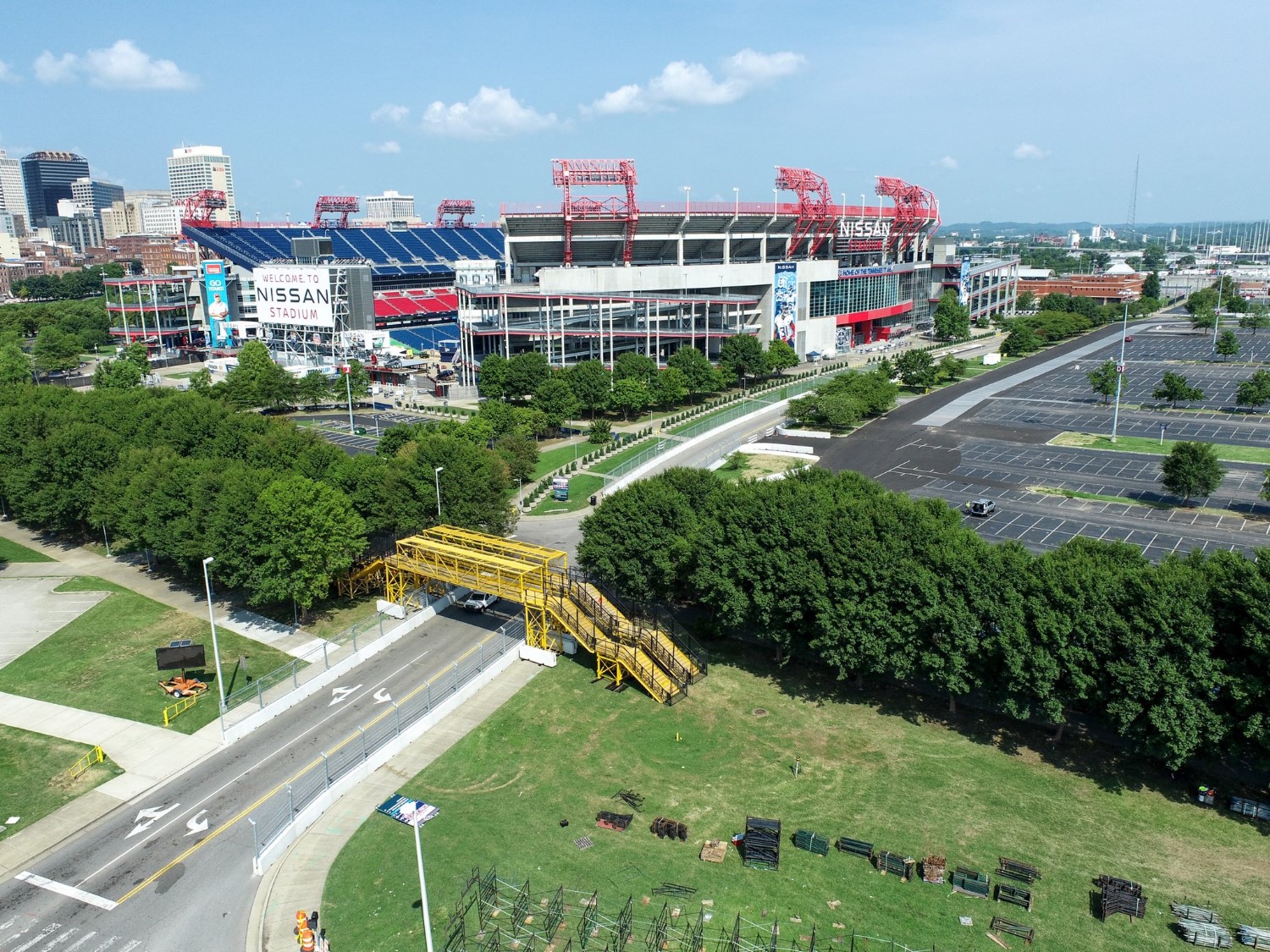 After a 4-week long break, the NTT IndyCar Series returns with a brand new race on the streets of Nashville, Tennessee this weekend.

Ganassi drivers dominate the point standings with 3 of the top-5.

Alex Palou leads the championship by a thirty-nine point margin over Patricio O’Ward, with Palou’s Chip Ganassi Racing teammate Scott Dixon not far behind in third place. IndyCar’s most recent winner Josef Newgarden enters his home race in fourth place in the championship, while Marcus Ericsson rounds out the top five in a third Ganassi Honda.

With only six races remaining in the championship, every point is crucial.

This new 3.49 km, 11 turn circuit is uniquely highlighted by the straightaways across the Korean War Veterans Memorial Bridge.

Since no one has run on this circuit yet, the team that hits on the best setup will likely win the race.

Usually, cars would be set up with the most downforce possible for a street circuit, but the long straights will likely see some teams going with a low downforce setup to maximize straightaway speed, but sacrifice some speed in the twisty sections.

We would be remiss not to make mention of the track’s pit lane, which spans two straightaways. The 90-degree left-hand (Turn 10) in the pitlane will make pit box entry and exit diabolical for the drivers pitting on the curve. Trying to look in your right mirror for a car coming around from the blind spot could lead to some real carnage.

Similar to Mid-Ohio, the start line will be after the second bridge straightaway, with a run through turn eight and into turn nine, where most of the overtaking action will take place. The track designers gave this corner a 75-foot wide corner entry, one of the largest on the calendar, so expect some audacious overtaking attempts here. The finish line is located two corners later in front of Nissan Stadium, home of the NFL’s Tennessee Titans.

Get a glimpse of the Nashville Street Circuit from the air, IndyCar’s newest venue.

Push-to-pass parameters: 150 seconds of total time with a maximum time of 15 seconds per activation.

Firestone tire allotment: Seven sets primary, four sets alternate to be used during the event weekend. One additional set of primary tires may be used by teams fielding a rookie driver. Teams must use one set of primary and one set of new (sticker) alternate tires for at least two laps in the race. 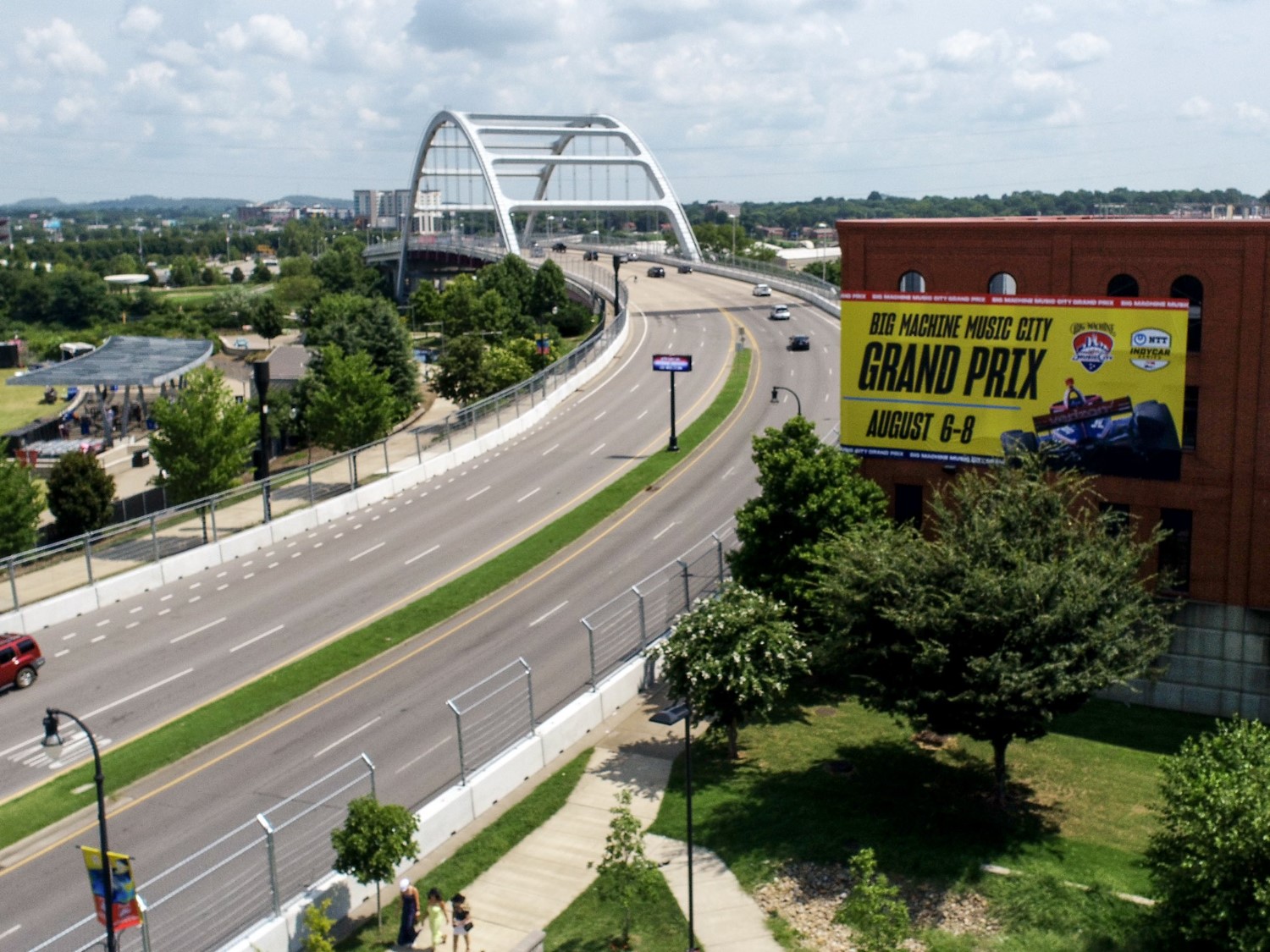 Here’s a comprehensive list of INDYCAR-related events and industry happenings to watch out for this week, with all times listed as local (Central Time):

From 5:30-7:30 p.m., NTT INDYCAR SERIES athletes will participate in INDYCAR Fan Fest on Lower Broadway between 1st and 3rd streets.

But for the first time, this event is open to the public.

Fans can head to Pins Mechanical Co. from 5:30-7:30 p.m. Thursday to see an impressive lineup of world-class athletes bring their fierce competitiveness to this doubles ping-pong tournament. All of the ticket proceeds from the event will be donated to SeriousFun Children’s Network.

SiriusXM ‘Brick-by-Brick’ with Jack Arute and Tony Kanaan, ‘Off Track with Hinch and Rossi:’

Be there as veteran motorsports reporter Jack Arute and 2013 Indianapolis 500 presented by Gainbridge winner Kanaan host their radio show “Brick by Brick” on SiriusXM Channel 205 from 7-8 p.m. Thursday at Margaritaville Restaurant at 425 Rep. John Lewis Way South in Nashville.

Each episode, Arute and Kanaan give race fans the latest news, details and analysis from NTT INDYCAR SERIES races and from within the paddock.

After Arute and Kanaan, stay at Margaritaville Restaurant from 8-9 p.m. to see a taping of “Off Track with Hinch and Rossi,” a podcast hosted by NTT INDYCAR SERIES athletes Alexander Rossi and James Hinchcliffe, which airs on SiriusXM.

From 5-7 p.m. Thursday at AJ’s Good Time Bar on 421 Broadway in Nashville, owned by country music legend Alan Jackson, Women with Drive will host a reception to honor the many successful women in the motorsports industry.

Women with Drive Summit and Play Like a Girl:

Women with Drive will continue to kick the weekend into high gear with an all-day summit at The George Jones on Friday.

This summit benefits Play Like a Girl, a 501(c)3 charitable organization inspiring girls through sport and active play with a mission to ensure that every girl reaches her full potential by providing girls ages 9-13 an opportunity – and in many cases, their only chance – to participate in sport and physical activity.

Additionally, INDYCAR and Play Like a Girl will bring a group of young women front and center to the NTT INDYCAR SERIES action in Nashville with an at-track experience from 1:30-4:30 p.m. The group will get a jam-packed tour all over the venue that showcases the variety of opportunities and future career paths for women in motorsports, the automotive industry and within the NTT INDYCAR SERIES.

This free event at the track for middle school-aged girls and one parent still has spots available. Interested individuals can learn more here.

Nashville’s prominent country music scene kicks into gear at 5:15 p.m. Friday with Drew Green at the Main Stage. The Main Stage is located on the corner of 1st Street and where the pedestrian bridge across the Cumberland River begins, just next to the Korean Veterans Memorial Bridge.

Green, a Nashville-area native, is a singer and songwriter known for songs such as “She Got That” and his debut single “Little More Be Alright.”

At the Main Stage at 5 p.m. Saturday, another evening of music will kick off, starting with country music singer and race fan Tim Dugger, known for singles including “You’re Gonna Love Me” and “Beer On A Boat.”

Following Dugger on the Main Stage Saturday night will be Jon Pardi at 8:30 p.m. The Country Music Association and Academy of Country Music award-winning artist will headline an epic concert the night before the Big Machine Music City Grand Prix. Known for his critically acclaimed album “Heartache Medication,” Pardi will bring the energy to downtown Nashville before a fireworks show ends the evening.

The exhilarating INDYCAR takeover of Nashville concludes Sunday night as one of Nashville’s most iconic venues merges with America’s most iconic open-wheel series with a Grand Ole Opry-style concert at 7 p.m. on the Main Stage, featuring some of country music’s biggest artists.