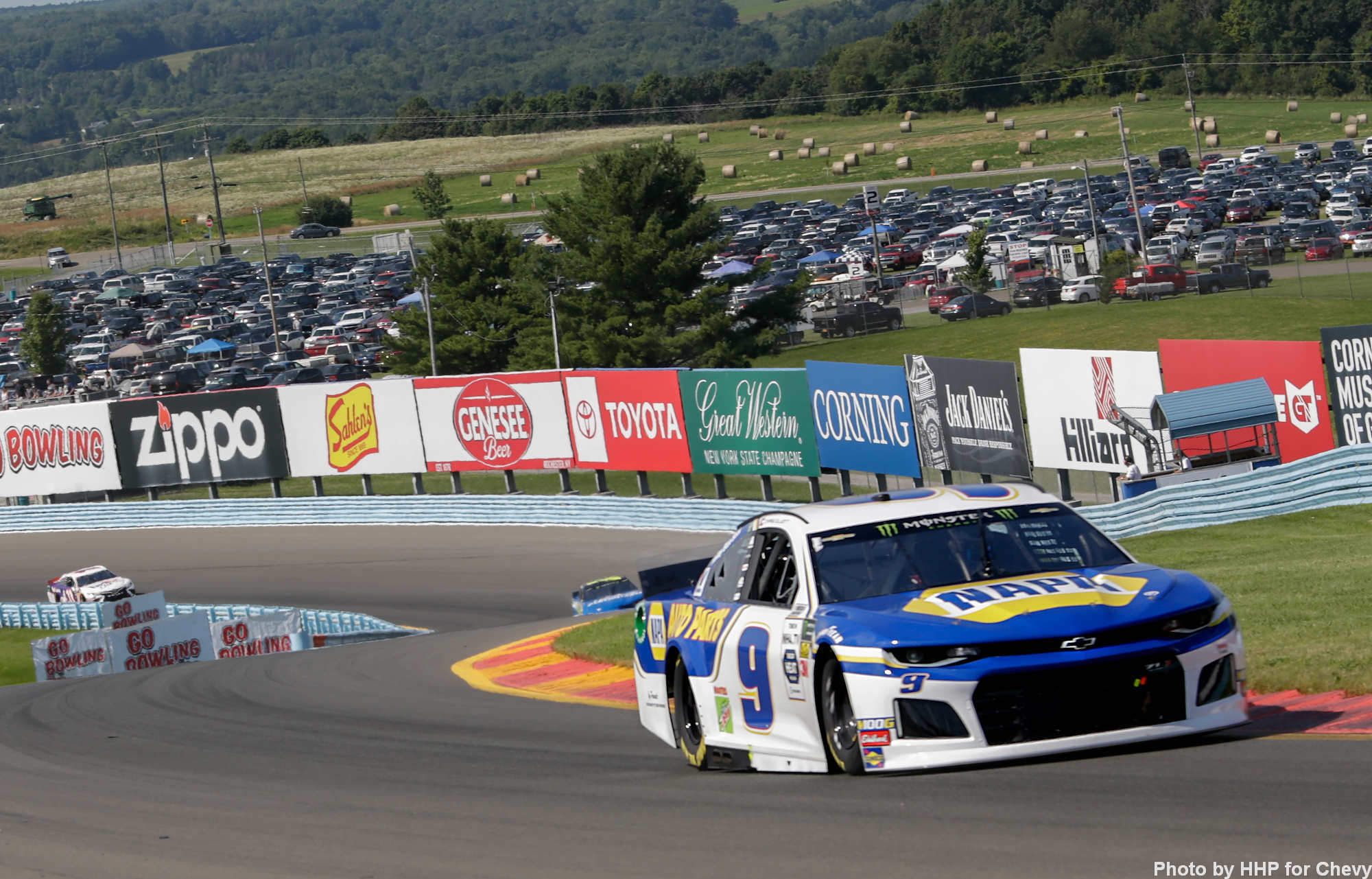 When NASCAR resumes racing after the longest break in the schedule in three decades, we should be prepared to hand the winner’s trophy to Chase Elliott after 82 laps at Watkins Glen International, right?

After all, the reigning NASCAR Cup Series champion won the last two races at the 2.45-mile road course, and he’s the heavy favorite to win a third straight in Sunday’s Go Bowling at the Glen (3 p.m. ET on NBCSN, MRN and SiriusXM NASCAR Radio).

Elliott’s road course credentials are impeccable. The driver of the No. 9 Hendrick Motorsports Chevrolet picked up his first career victory at The Glen in 2018 and followed that with another win in 2019. (There was no race at Watkins Glen in 2020 because of the coronavirus pandemic).

All told, seven of Elliott’s 13 Cup victories have come on road courses, including both his wins this year—in the inaugural event at Circuit of The Americas in Austin, Texas, and the long-awaited return of the NASCAR Cup Series to Road America.

“We’re excited to get back to Watkins Glen,” says Elliott, who beat runner-up Martin Truex Jr. in his last two trips to The Glen. “Any time you can run well and win somewhere, it’s always nice to go back.

“Winning in the Cup Series, in general, is something to be proud of, in my opinion, regardless of where it is or who you beat. The last couple of trips to The Glen, I’ve enjoyed battling Martin. I feel like we share a lot of mutual respect and have for many years, so I have enjoyed those battles with him.”

There’s one obstacle to Elliott’s march to Victory Lane on Sunday. After finishing 18th at New Hampshire Motor Speedway in the last Cup event before the Olympic break, he’ll start 11th at Watkins Glen.

In the last 16 events at the historic road course in New York’s Finger Lakes District, the winner has come from the top 10 on the grid 14 times—the exceptions being Tony Stewart from 13th in 2009 and Joey Logano from 16th in 2015. Elliott’s two victories at the track came from third in 2018 and from the pole a year later.

Truex starts two positions ahead of Elliott, so the driver of the No. 19 Joe Gibbs Racing Toyota also will have work to do.

“I think the last two second-place finishes, it was just track position,” says Truex, who picked up his lone victory at WGI in 2017. “The 9 (Elliott) ended up in front of us, and we couldn’t pass him. That’s a really, really fast place, and it can be difficult to pass. His car was better in different spots than mine.

“From lap times, we were faster both years—I could get to him, but he was fast in the right places where I couldn’t pass him. I will have to hopefully figure out how to get faster in a few key areas.”

The three Team Penske drivers—Brad Keselowski, Logano and Ryan Blaney—will start from the top three spots on the grid, in that order. Keselowski finished second in three consecutive races (2011-2013), twice to road course ace Marcos Ambrose and once to Kyle Busch.

Logano won at The Glen in 2015 and finished second to Denny Hamlin a year later, but in his last three starts there, he has a best result of 23rd. Blaney’s best finish was fifth in 2019, in his fourth Cup start at the track.

With the Cup debut at the Indianapolis Motor Speedway Road Course to follow, Sunday’s Go Bowling at the Glen is the first of two straight road course races and the 23rd event of the 26-race Cup regular season.

At WGI, two very important battles are set to take place. Hamlin, who is winless this year, is fighting to retain his series points lead over Kyle Larson, with 15 Playoff points and an automatic Playoff berth on the line for the regular-season champion.

Hamlin holds a 13-point lead over four-time winner Larson, who has clinched a Playoff berth thanks to his multiple trips to Victory Lane.

At the bottom of the Playoff grid, Tyler Reddick leads Richard Childress Racing teammate Austin Dillon by five points in a heated battle for the final Playoff position.

Four of Cindric’s 12 career wins have come at road courses, but all four of his 2021 victories have come at ovals—Daytona, Phoenix, Dover and Pocono. There’s a strong possibility that could change in Saturday’s Skrewball Peanut Butter Whiskey 200 (4 p.m. ET on CNBC, MRN and SiriusXM NASCAR Radio).

Between his victory at The Glen in 2019 and Saturday’s return, Cindric has posted 11 wins and captured the series championship with a victory in the season finale at Phoenix last year.

“I’ve thought about it, because we didn’t have the race last season, and obviously the last time we were there, I won the race, and it was my first win in the Xfinity Series,” says Cindric, who will start from the outside of the front row next to polesitter Justin Allgaier. “And to think how far I’ve come as a driver in that amount of time is pretty incredible, and I’ve got a lot of the same guys around me.

“It’s going to be fun to kind of show up there knowing what we did the last time, but it’s still the same challenge. That’s not going to make it any easier, I can promise you that, but it’s a fun race track. It’s a great track to have on the schedule, and I know there’s always a great fan base that shows up at that place, so looking forward to going back.”

If Cindric, the current series leader, is comfortably in a Playoff position this season, drivers on the bubble by definition are not. With seven races left in the regular season, Michael Annett currently holds the last of 12 Playoff-eligible position by 32 points over Riley Herbst 41 points over Brandon Brown.

Annett missed the last two Xfinity races after suffering a stress fracture in his right femur, which has been surgically repaired. After recovering during the Olympic break, the driver of the No. 1 JR Motorsports Chevrolet has been cleared to race at Watkins Glen.

Annett also retained his Playoff eligibility, thanks to a medical waiver from NASCAR.

Carson Hocevar, Stewart Friesen and Chandler Smith currently occupy the last three Playoff-eligible positions. Given that Smith holds a 40-point lead over Derek Kraus—the first driver out—it’s likely Kraus will have to win the race to advance to the postseason.

The same is true of Tyler Ankrum and 2016 series champion Johnny Sauter, who are 44 and 51 points below the cutoff, respectively.

Smith, on the other hand, simply needs to avoid disaster—and to avoid the whammy of a driver below him in the standings winning the race.

“I think the biggest thing for us going to Watkins Glen is just not beating ourselves,” says Smith, who will start third behind Hill and Gilliland. “We’ve got to finish the race, make sure we are 25th or better, have a solid day on my end and the pit crew’s end and hope everything goes our way.”

Former NASCAR Cup Series driver Paul Menard will drive a fifth truck for ThorSport Racing on Saturday. Though the Truck Series hasn’t competed at Watkins Glen since 2000, Menard has a combined 27 national series starts there—11 in the Xfinity Series and 16 in Cup.

To win the race, however, Menard will have to overcome a 39th-place starting position.

Next Race: Go Bowling at The Glen