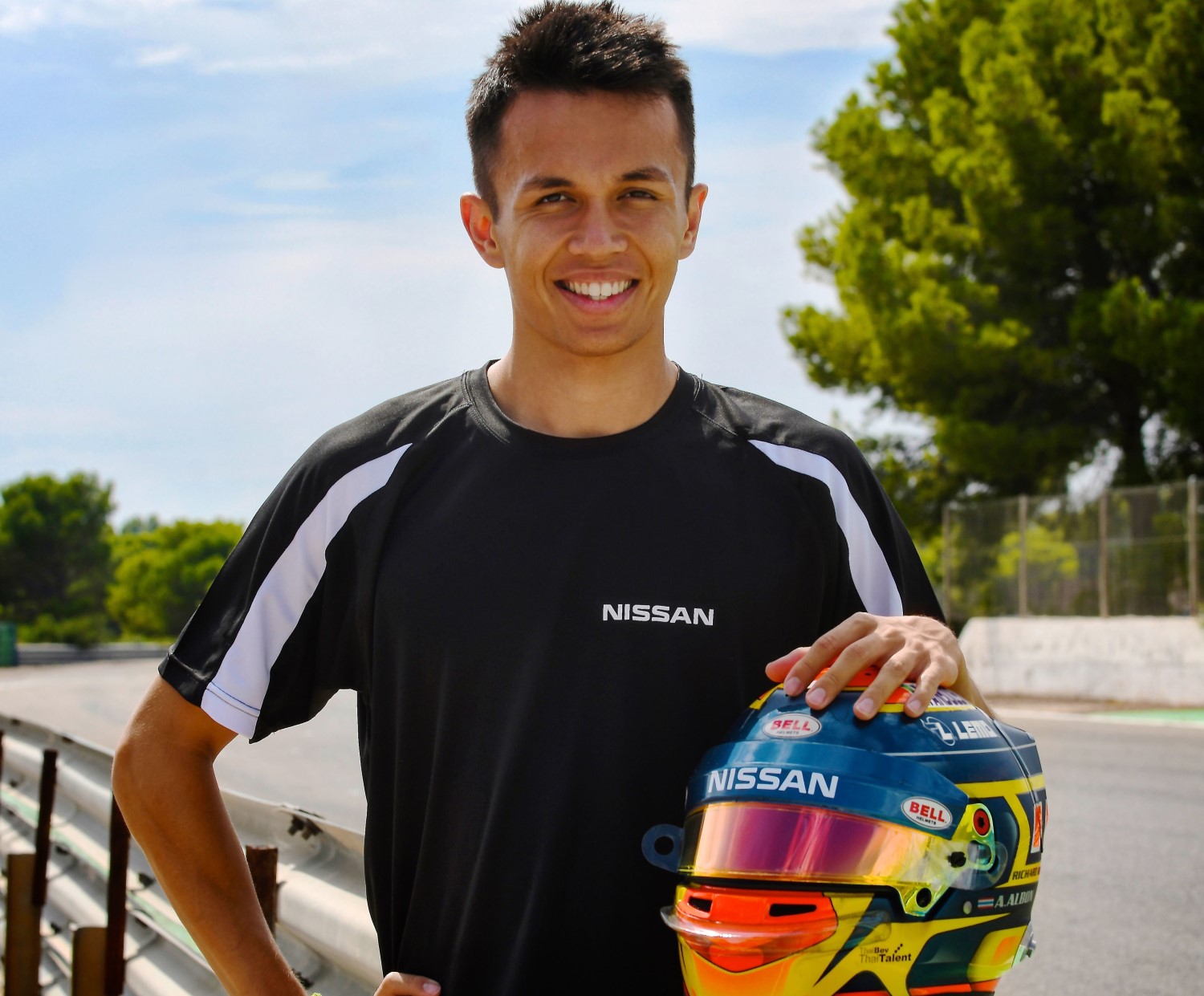 We have already rumored that Michael Andretti is close to wooing former F1 driver Romain Grosjean and his engineer Olivier Boisson over from Dale Coyne Racing to his team. If it happens, Coyne, who has a history of bringing talented young drivers into IndyCar, will need a suitable replacement.

We also showed a photo of Alex Albon sitting in Dale Coyne’s IndyCar at IMS this past Friday (below) trying it on for size and checking the Aeroscreen visibility.

Tired of racing Taxicabs in the DTM series, the former F1 driver Albon has expressed a keen interest in IndyCar next year.

And it was revealed he has been in talks with IndyCar team owner Dale Coyne for some time now.

“He’s been on our radar for a while and we’ve been speaking with him for over a year now and he’s interested, for sure”, Dale Coyne said in an interview with F1i.com about the former teammate of Max Verstappen, who paid a visit to the Indycar grid last weekend. Coyne is also the man who offered Romain Grosjean a seat in the racing class last year.

“Grosjean and Alex talked together for quite a while,” Coyne continued.

“Romain was telling him it was fun to be in IndyCar, a lot of less pressure, better relationships between teams, team owners, and between drivers.”  “And I think Alex appreciates that the teams here aren’t set up to have one guy as number one and the other as the bridesmaid. That’s something Alex has been through, right?” Coyne said.

“So anyway, I think if they’re used to the pressure of Formula 3, 2 and especially Formula 1, drivers find IndyCar a breath of fresh air. The hard work is what’s done on track, in pitlane and in the engineering trailer. There’s not the politicking and pressure here like over in Europe.”

Alex Albon is in the Indy paddock this weekend and visited with a number of team owners.

“I want to see what’s out there,” Albon told IndyCar.com. “My main goal is to be in F1, but there’s never a 100 percent certainty on that, so you got to have plan B and C to see what else is out there. I’ve always had that interest within INDYCAR. You see it on the rise now, especially with the viewership and everything going up.”

Albon visited with former Formula One driver and NTT INDYCAR SERIES rookie Romain Grosjean before practice for the Big Machine Spiked Coolers Grand Prix (12:30 p.m. ET Saturday, live on NBCSN). Afterward, he talked with team owners Dale Coyne and Rick Ware and hopped inside the cockpit of the No. 52 Nurtec ODT Honda of Dale Coyne Racing with Rick Ware Racing.

Albon said he was curious to see the aeroscreen in person and was impressed with how good the vision was from within the cockpit. The aeroscreen was something he saw in development while racing for Red Bull, because Red Bull Advanced Technologies helped design the innovative cockpit protection device.

Albon said Grosjean’s happiness and success also have been a source of curiosity that made the 25-year-old want to see the NTT INDYCAR SERIES in person.

“Seeing Romain, as well, seeing what he’s doing, it’s been really interesting to see,” Albon said. “I just wanted to see what he thinks about it. Is he happy? Of course, he’s happy. He’s always got a smile on his face. How was that transition for him, and how did he feel in INDYCAR straight away? He looks very comfortable here.”

“It’s been really interesting to see,” he said. “Honestly, it’s more just hard to say if it’s something I would want to be doing. I’m seeing a few teams out there right now. I want to chat with them and see what’s out there, so I can decide what I am going to do.

We have had F1 driver Alex Albon on our Silly Season page (below) for a number of months now as a possible driver for Andretti Autosport, replacing James Hinchcliffe.

He will be at the Indianapolis Motor Speedway this weekend talking to a few IndyCar teams about a possible ride for 2022, but we assume his talks will be focussed with Andretti.

Albon is tired of sitting on the sidelines as a reserve driver, just running laps on a simulator, and wants to be back in a cockpit.

With Romain Grosjean driving for Dale Coyne Racing, and Kevin Magnussen dipping his toes into IndyCar, Albon now views IndyCar as a valid alternate to F1 if the right deal can be put together.  He has some Thai money behind him.

(GMM) A new contender has emerged for the potential vacancies at Williams and Alfa Romeo for 2022.

Alex Albon lost his Red Bull seat at the end of last year, but he has remained a reserve driver as well as racing with the energy drink company’s support in the German series DTM.

The 25-year-old is not ruling out a racing return to Formula 1.

“But in my situation, you always have to be open to other options such as IndyCar or Formula E. If there is a chance to stay in the Red Bull family, I will definitely take it.”

From Red Bull’s perspective, Albon remains an important part of the Formula 1 camp.

“He’s our best in the simulator,” confirms Dr Helmut Marko. “His contribution to development is extremely important for the team.

“We won’t ruin his future, but we want to keep him with us.”

However, Marko does not deny that Red Bull might even help Albon to sniff out opportunities for 2022, with Williams and Alfa Romeo openly on the driver market.

“That would depend on the details of the contracts,” said Marko.