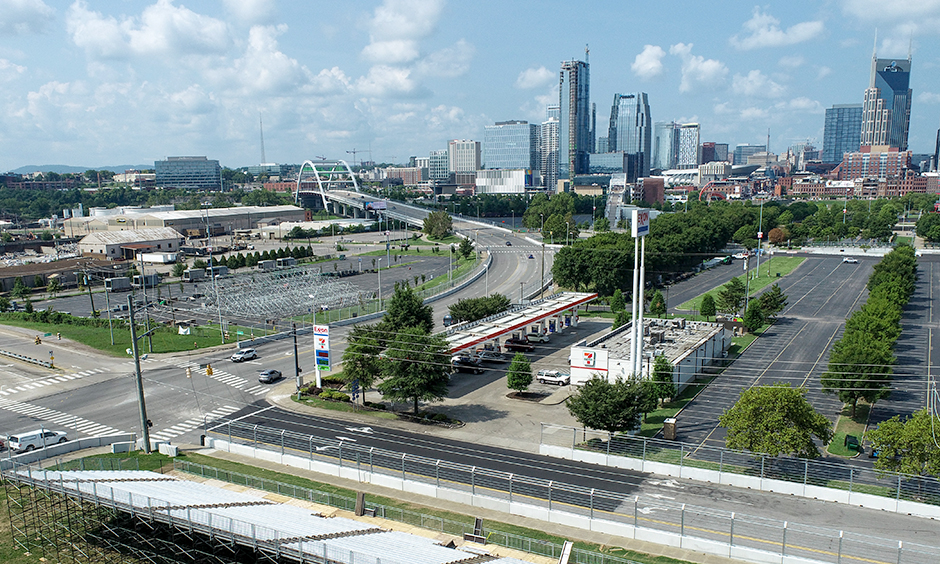 Good morning from Nashville, TN and the first Music City Grand Prix on the streets of downtown Nashville.  The excitement locally for this event is immense.  The  starting lineup of 27 cars this weekend is the most cars outside of the Indianapolis 500 the series has had in eight years.

IndyCar has not had an inaugural street race event since Baltimore 2011.   The highlight of that 3-year event was the IndyCars racing over a light rail track, which proved to be tricky when the cars went airborne for seconds.

The defining feature of the brand new 2.17 mile track is the cars crossing the Korean Veterans Memorial Bridge twice.  This prompted safety concerns which were quickly dispelled by track designer, Tony Cotman.  Cotman explained that there will be divers and other water safety crews onsite just in case a car careens off the bridge.  But the bridge is wide enough to accommodate the two racing lanes.

Cotman expects much of the passing to happen in Turn 1, right off the bridge.   In that area the braking/passing zone will be 80-feet wide.  And if you do not get through turn 1 properly, turn 2 also offers an overtake opportunity.

Weather today should be much better than the rest of the weekend.   Temperatures will hit the mid-80s today with some clouds expected this afternoon.

The IndyCar practice session for today is scheduled for 3:10 pm.

Stay tuned to AR1 for more updates from Nashville.