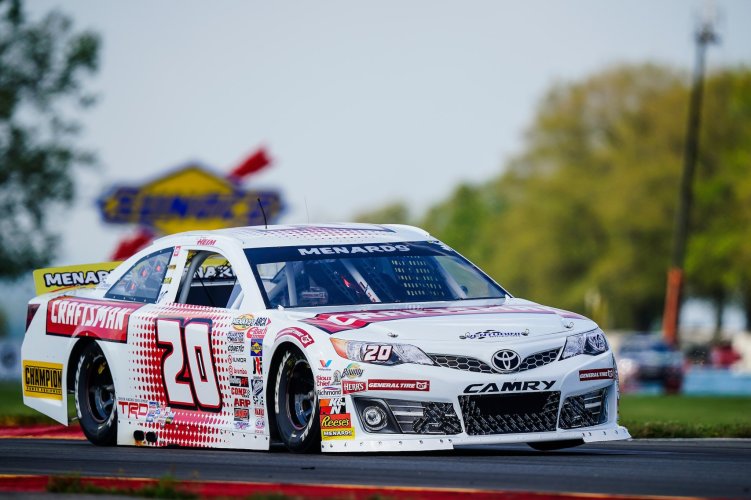 Corey Heim’s worst run of the 2021 ARCA Menards Series season thus far came in June, when he finished seventh at the Mid-Ohio Sports Car Course the last time the series competed on a road course.

He made up for that result Friday evening at Watkins Glen International, where the driver of the No. 20 Craftsman Toyota all but coasted to victory in the Clean Harbors 100 at The Glen, the series’ second and final road course race of the season.

Heim, who won his fifth ARCA Menards Series race of the year and sixth overall dating back to last season, closed the gap to points leader Ty Gibbs in the championship standings. Just two points separate the series’ top title contenders after 13 races.

“Everything we possibly could bring to the race track, we brought today,” said Heim, who led the final 18 of 41 laps on the 2.45-mile road course. “This Venturini Motorsports team has battled back from a lot this year. I’m really proud of them; this Craftsman Camry was rolling really good today.”

The entire complexion of Friday night’s race at Watkins Glen changed at the end of Lap 23. Chase Briscoe, who had taken the lead from Gibbs eight laps prior with what appeared to be the dominant car, was forced to pit with a suspension issue.

At the same time, Heim was catching and passing Gibbs for position. Because of Briscoe’s issue, what would have been a move for second became a pass for the lead when Heim got the best of Gibbs going into the bus stop at Watkins Glen.

“He’s just another car on the race track, and I was trying to get the lead,” Heim said. “Race him hard. Race him clean. And he did, too.”

Added Gibbs, who struggled with a left rear issue Friday: “My guys worked on it, and we tried to fix it, but that’s still not the reason we got beat. We still got beat by (Heim). Congratulations to the 20 group.

“We just kind of missed it today, and we’ll keep hammering down.”

Briscoe, the 2016 ARCA Menards Series champion who was competing on the platform for the first time since his title run, eventually had to park his car with the suspension issue. He finished 23rd after leading nine laps.

Austin Hill, who like Heim is scheduled to race in Saturday’s NASCAR Camping World Truck Series race at Watkins Glen, finished second after passing Gibbs in the closing laps.

Riley Herbst, Taylor Gray, Nick Sanchez, Austin Wayne Self and Jack Wood rounded out the top 10 in the Clean Harbors 100 at The Glen.

Heim, with his win at Watkins Glen, shrunk Gibbs’ lead in that series, too,

Friday’s Clean Harbors 100 at The Glen was almost completely clean, with one caution breaking up what otherwise was a green race. The yellow flag was displayed after Dale Quarterley spun into the wall after contact with Drew Dollar on Lap 17.

The NASCAR Cup Series Go Bowling at The Glen race weekend continues with a first for Watkins Glen as Saturday will feature a double-header of NASCAR racing, starting off with the United Rentals 167 at The Glen at 12:30 p.m. ET in the return of the NASCAR Camping World Truck Series to The Glen for the first time since 2000. That will be followed up by the Skrewball Peanut Butter Whiskey 200 at 4 p.m. ET. Sunday’s Go Bowling at The Glen will cap off the weekend at 3 p.m. ET.