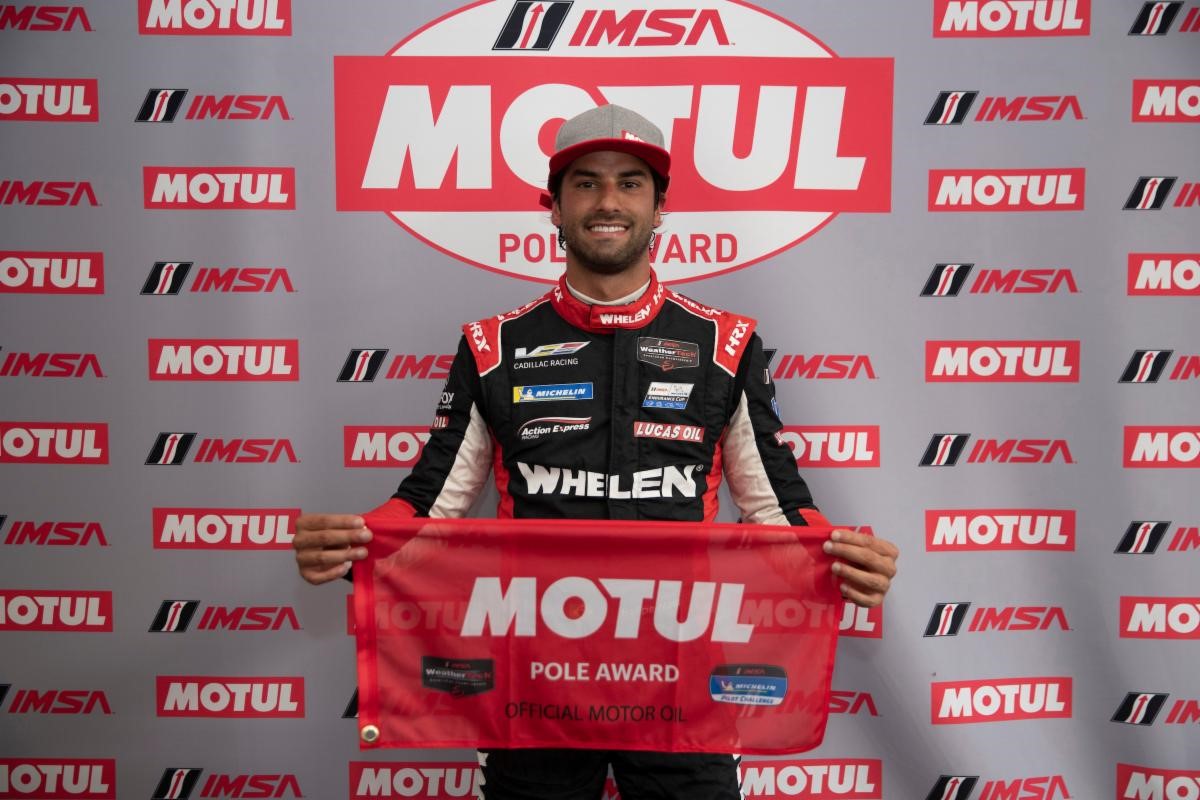 The full qualifying results and starting lineup for today’s IMSA WeatherTech SportsCar Championship Sportscar weekend at Road America have been added to the bottom of this article.

Because of the disjointed way IMSA publishes their qualifying results, no other publication was able to provide the complete aggregated rundown.

Felipe Nasr had the controls of the No. 31 Whelen Engineering Cadillac DPi-V.R for the 15-minute qualifying session this afternoon. The Action Express Racing team had to change the No. 31 Cadillac over to a wet setup for the Brazilian for the run. A steady sprinkle of rain covered the 4-mile, 14-turn circuit making it tricky for the DPi field. Nasr posted a time of 2:07.919 that was good for pole position for tomorrow’s two-hour-and-forty-minute race that takes the green at 1:40 p.m. CT. He and teammate Pipo Derani will pace the field to the green.

“It was awesome,” Nasr said. “Rain conditions, just how I like it (laughing). I don’t think we have had a wet qualifying session for some time. This track is very tricky. We managed to put a lap together. I was able to get some clear laps and get the peak tire performance for that one lap. The 31 Whelen Engineering Cadillac felt pretty good. It is always great to be up front. I couldn’t be happier for the team.”

Nasr was one of at least five cars to spin in the DPi/LMP2 qualifying session in treacherous conditions that also saw offs by Chip Ganassi Racing’s Kevin Magnussen and an impact with the barriers by the No. 60 Meyer Shank Racing Acura DPi of Olivier Pla.

Both cars continued after their incidents, in what appeared to be overly increasingly wet conditions.

The No. 55 Mazda RT24-P of Oliver Jarvis qualified third, ahead of Magnussen and Tristan Vautier, who completed the top-five in the No. 5 JDC-Miller Motorsports Cadillac.

Jordan Taylor gave Corvette Racing its second pole position at Road America in three years with the fast time in qualifying for the IMSA SportsCar Weekend race – the team’s 20th event at the historic road course and a fourth straight 1-2 qualifying result in GT Le Mans (GTLM) on the season.

Taylor, driving the No. 3 Mobil 1/SiriusXM Chevrolet Corvette C8.R with Antonio Garcia, set a best lap of 2:20.979 (103.368 mph) ahead of Sunday’s two-hour, 40-minute race. Taylor and Garcia arrived at Road America after three straight victories and lead the GTLM Drivers Championship, as does Chevrolet in the Manufacturers standings.

Taylor went 0.627 seconds quicker than Nick Tandy in the No. 4 Mobil 1/SiriusXM Corvette that he shares with Tommy Milner. Tandy and Milner were second in the two most recent GTLM races at Watkins Glen and Lime Rock, and they also won the non-points Detroit round in mid-June.

Aaron Telitz scored class pole in GT Daytona, which wound up as the quickest lap time out of all cars due to the change in track conditions.