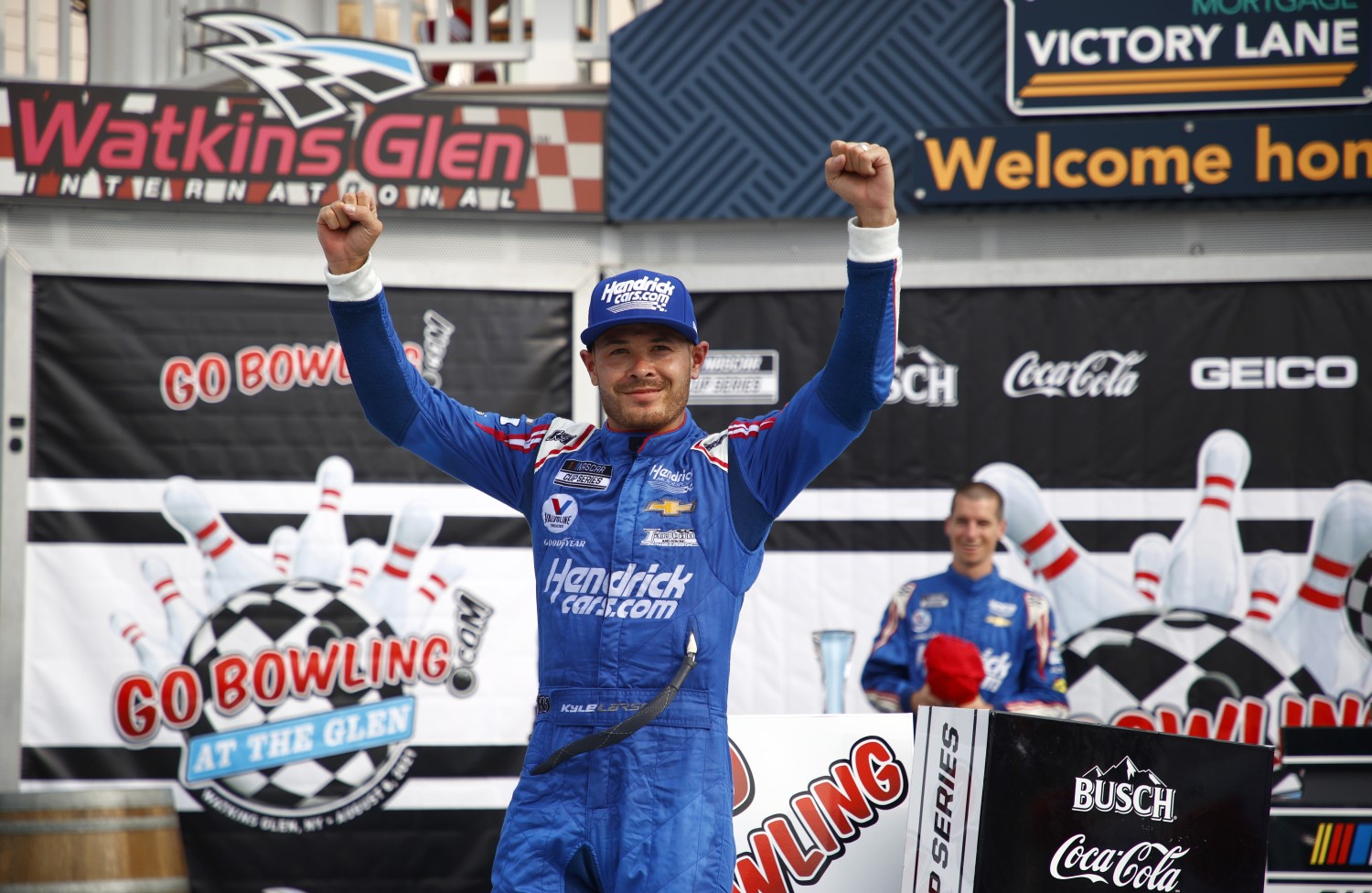 The cancel culture tried to cancel him, but once again Kyle Larson showed the world that he is the best NASCAR driver by defeating road course ace Chase Elliott in the NASCAR Cup race at Watkins Glen. It was Larson’s 5th win of the year as he came home 2.4s ahead in his #5 Hendrick Chevy.

It was a 1-2 finish, the fourth time Hendrick Motorsports drivers Larson and #9 Elliott have finished 1-2 this year.

Martin Truex Jr. finished third in the #19 JGR Toyota and he was followed by JGR teammates #18 Kyle Busch and #11 Denny Hamlin who rounded out the top-5.

Watkins Glen International today announced the sixth consecutive grandstand sellout and the first-ever camping sellout for the Go Bowling at The Glen NASCAR Cup Series to cap off a historic weekend of racing in Central New York.

“We can’t thank our dedicated fans enough for getting The Glen to this sixth straight grandstand sellout and first sellout for camping,” said WGI President Michael Printup. “We’ve seen their passion as they have packed the campgrounds, as well as the stands, welcoming NASCAR back to our storied venue. And we were proud to bring them an action-packed weekend that included four series racing over the course of three days.”

Sunday’s trophy at the historic Watkins Glen International road course is Larson’s NASCAR Cup Series-best fifth of the year, 11th of his career.

His 2.430-second victory over Elliott was good enough to move him into a tie with Denny Hamlin for the regular-season championship with only three races remaining before the playoffs.

It marked the eighth Hendrick Motorsports victory in the last 11 races and the fourth time Larson and Elliott have finished 1-2 – the third time at a road-course event.

Larson led the final 27 laps of the 90-lap event, taking the lead for good from Joe Gibbs Racing driver Martin Truex Jr., who had paced the field for a race-best 34 laps. Elliott got around Truex with nine laps remaining to claim second place.

“Chase was already catching me pretty quick, even with me being in open track so when I caught those, I think four (lapped) cars and got into the 38 (Anthony Alfredo) right here, I thought I would look at my mirror and the 9 (Elliott) would be right on me, but thankfully had a comfortable enough gap to where I could make a mistake like that,” said Larson, who apologized to Bell during his post-race interview. The two made contact racing door-to-door for second place late in the race.

“Incredible race today, hats off to Hendrick Motorsports,” Larson added. “It’s awesome. It really just shows how good the organization is, all the people that they’ve assembled at the race shop, all the men and women. All four of us (Hendrick drivers) could not be getting these wins like we have been without them. Thanks to them and thanks to everybody else I get to race for.”

Although Elliott, 25, had to settle for a runner-up showing, it was a stellar drive for the reigning NASCAR Cup Series champion and two-time Watkins Glen winner. He started the race from the last row – and his crew chief Alan Gustafson was suspended – after his car failed pre-race technical inspection.

Elliott steadily made his way forward, picking off cars with each turn. And as with Larson, he had to navigate that lapped traffic in the closing laps, which essentially cost him any shot at getting close enough to his teammate to challenge for the lead.

“I made too many mistakes to get the win unfortunately, and made it too late in the race,” Elliott said. “Super proud of our team. Been kind of an uphill battle all day, but everybody was just super prepared coming into the day and our NAPA team just did a really good job of fighting it.”

With three races remaining to set the playoff field, Reddick gave himself a little more cushion in that 16th and final transfer position. He improved his advantage over his Richard Childress Racing teammate, 17th-place Austin Dillon, from six points entering the race to 15 points heading to Indianapolis next week.

Brad Keselowski started from the pole and led the first nine laps before spinning out of the top spot in Turn 6. He recovered, but another brake lock-up in the final stage sent his No. 2 Team Penske Ford sliding into teammate Joey Logano’s No. 22 entry on Lap 56. Keselowski kept going and finished 35th. Logano, who started second and won Stage 1, continued and finished 22nd.

Note: Post-race inspection in the Cup Series garage was clear without major issue, confirming Larson’s victory. Two cars were found with one unsecured lug nut each — the No. 18 Joe Gibbs Racing Toyota of Kyle Busch and the No. 38 Front Row Motorsports Ford of Anthony Alfredo. According to the guidelines in the NASCAR Rule Book, those infractions should result in fines for each crew chief in next week’s penalty report.

Kyle, what a great victory, but there in those closing laps, I have to ask, as you caught all those lap cars were you worried about losing the time there?

KYLE LARSON: Yeah, I was. Chase was already catching me pretty quick, even with me being in open track, so when I caught those, I think, four cars and got into the 38 right here, I thought I would look at my mirror and the 9 would be right on me, but thankfully had a comfortable enough gap to where I could make a mistake like that.

I want to say a big apology to Christopher Bell. I was inside but I wasn’t inside enough, and I didn’t — I needed to have the nose a few feet further ahead, and the angles just caught there in the middle and I ended up turning him. I hate that. I race with him a lot. He’s probably the one guy that I race with the most in all my racing, so hate to turn him like that. We’ve had incredible races together.

Anyways, hats off to Hendrickcars.com. Thanks for everything you guys do for me, everybody at Hendrick Motorsports, Rick Hendrick, Jeff Gordon, Cliff Daniels, this whole 5 bunch. Another amazing car. I could tell from about lap 3 after I stopped making a bunch of mistakes that we were going to have a car that could win today.

This is your fifth win on the season, one of the most successful seasons of all time. What does it mean to come to Hendrick Motorsports and have this successful of a season?

KYLE LARSON: Yeah, it’s awesome. I mean, it really just shows how good the organization is, all the people that they’ve assembled at their race shop, all the men and women. All four of us could not be getting these wins like we have been without them. Thanks to them, and thanks to everybody else I get to race for. Get to go to Iowa this week and chase another big win, so looking forward to that, and hopefully can just keep racking these wins up.

What do you want to say to another massive crowd here at Watkins Glen?

KYLE LARSON: Yeah, thanks all you guys for coming out. It’s been a while.

Chase Elliott, exhausting day but what a heroic effort it was to get back there to second at the end. How do you sum up this day? You passed more cars than I think anybody out there but still come up one spot short.

CHASE ELLIOTT: Yeah, I made too many mistakes to get the win, unfortunately, and made it too late in the race. Super proud of our team. Been kind of an uphill battle all day, but everybody was just super prepared coming into the day, and our NAPA team just did a really good job of fighting it.

If I hadn’t have let them down there, I think we would have had a shot at it, but congrats to Kyle, Cliff, all the guys on the 5. Happy for everybody at HMS. Hendrick Motorsports has been working extremely hard, and not only do the people deserve to win, but Mr. Hendrick deserves to win. Really happy for him, and I’ll try to clean some things up and make less mistakes next time. Maybe it’ll work out.