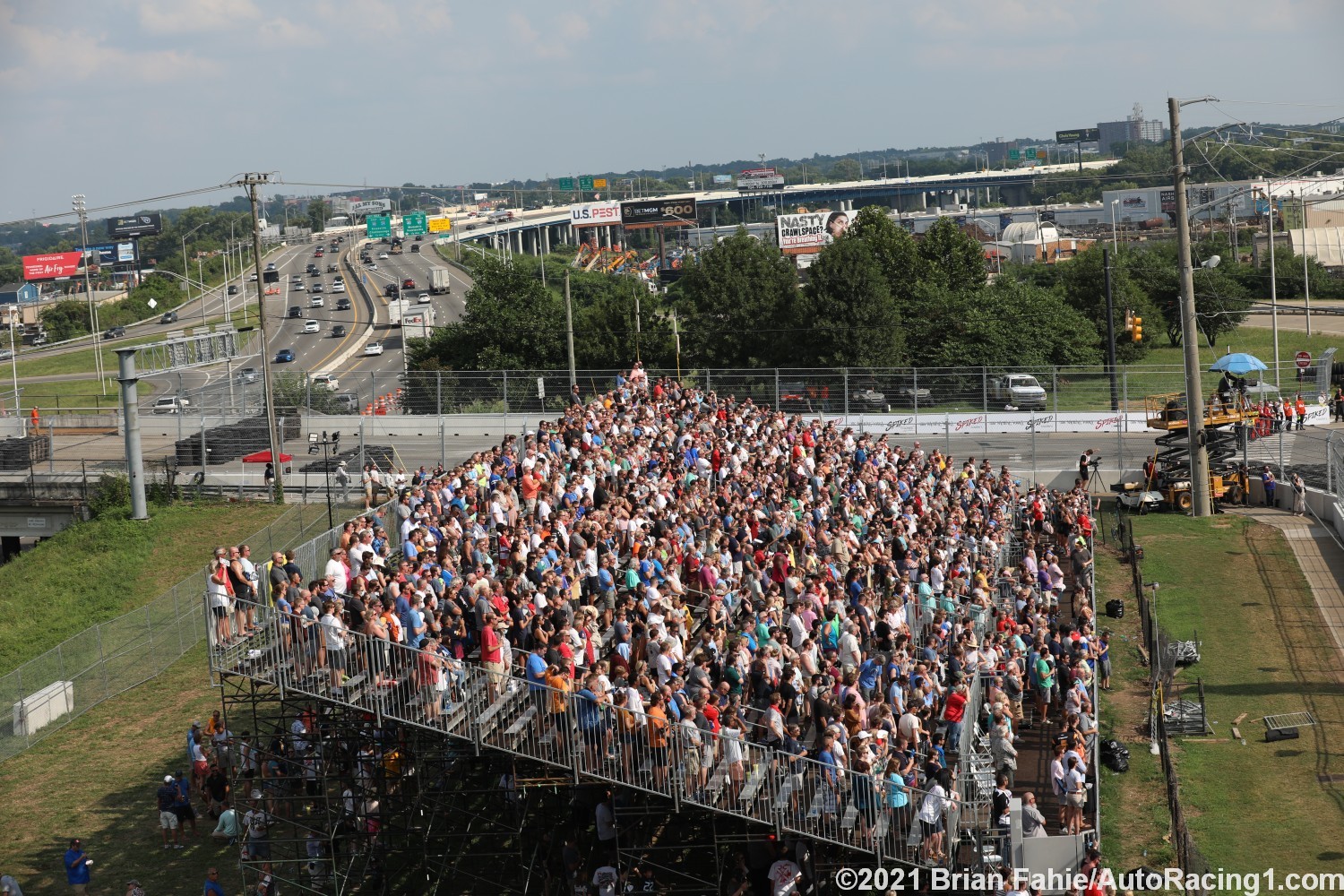 That was something else, wasn’t it”, writes Gentry Estes of the Tennessean?

The kind of crazy, untamed enjoyment that comes with seeing race cars zip through hairpin turns on the same downtown streets we regularly commute — though, you’d hope, a bit slower.

Look, honey! That crash was where we tailgate for Tennessee Titans games!

Sunday afternoon’s (deep breath) inaugural Big Machine IndyCar Music City Grand Prix (exhale) represented a new treat for our city. Maybe it wasn’t great racing with all the caution flags, but for the most part, this weekend was a success.

Because it wasn’t about a race anyway [Average race speed was a snail’s pace 72.6mph]. It was about the spectacle.

“For the first crack at it as an event, this was pretty freaking awesome,” driver James Hinchcliffe said. “… This town knew that we were here, and it looked like it loved that we were here.”

Over three days, more than 100,000 people withstood brutal summer heat. They packed grandstands and stood shoulder to shoulder on ramps in Nissan Stadium, and I’d bet the vast majority didn’t know much about the drivers they were watching, including Marcus Ericsson from Sweden, the eventual winner.

Nashville loves NASCAR and football and these days maybe even hockey. But outside of a rooting interest in local product Josef Newgarden, Music City isn’t much of an IndyCar hotbed – I mean, is there another in the country besides Indianapolis?

A big party downtown, though? We can do that.

“It can’t just be a race. It has to be an event, OK? And nobody throws a party like Nashville,” said Joe Mattioli, who watched Sunday with his wife while attending a rooftop event at The Joseph Hotel.

Mattioli wasn’t just any racegoer. He’s the former president of Pocono Raceway, and he has a history with Nashville and at the Fairgrounds Speedway Nashville. He understands this city and how to promote an event here.

Remember the DukesFest years ago at the Fairgrounds, celebrating the Dukes of Hazzard? That was him. He has raced school buses and mascots and even pastors on golf carts with jugs of water on the back. Whoever went faster without spilling the water would earn a church donation.

“The whole idea (of promotion) is to get people there, and generally they’re going to find something they like,” Mattioli said. “But you’ve got to get them there to begin with.”

And that was the inspiration behind this IndyCar race – Mattioli’s idea.

Going back to 2007, Mattioli tried unsuccessfully at least twice to start the race that finally came to life Sunday.

Each attempt was derailed, basically, by bad timing. The Nashville flood in 2010 halted the first try. Efforts were redoubled in 2015, leading to serious progress. But Nashville’s mayor, Megan Barry, ended up resigning in scandal, and “the political climate was not real stable” for a big event, Mattioli said.

Much like the ever-present talk about NASCAR returning to the Fairgrounds, the possibility of an IndyCar race in Nashville was out there for so long that it ceased appearing all that possible anymore.

And then, it happened.

“I came up with the idea, OK, but they got it done,” Mattioli said. “So they deserve the credit. I’m just thrilled.”

Now 68, Mattioli is living in suburban Dallas, working as a consultant. He sure wasn’t going to miss Nashville’s first IndyCar race and road race, though: “It’s like I’m going to my daughter’s wedding but somebody else is paying for it.”

Was a fun weekend for a wedding party.

In Nashville, they usually are.