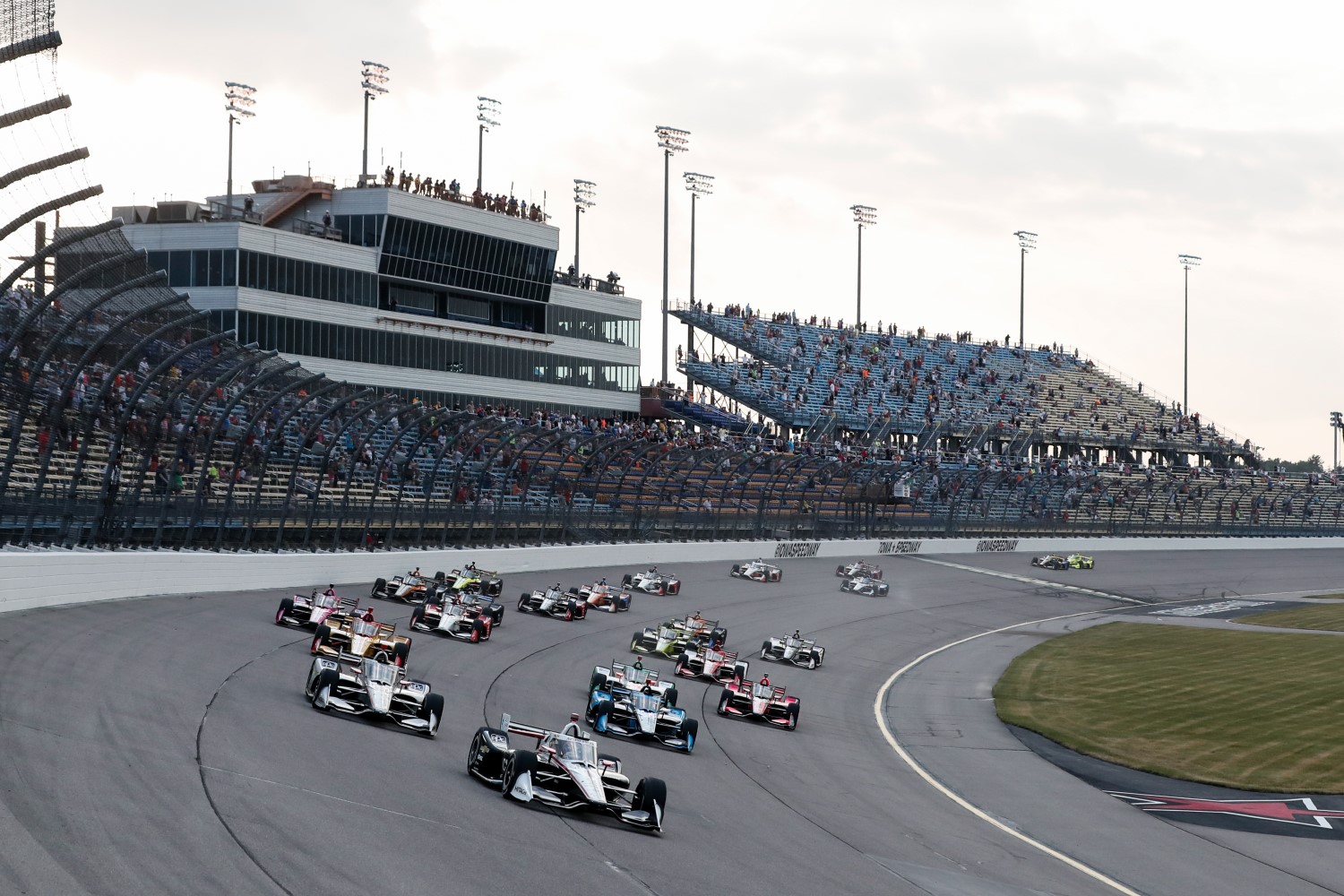 IndyCar will rent the track from NASCAR, who owns the facility, and promote the race themselves.

IndyCar has tried that before and failed miserably, but now Roger Penske is in command.

This rumor has now been upgraded to ‘fact’ with this announcement:

The NTT INDYCAR SERIES and Hy-Vee, a grocery chain based in the Midwest, have announced a new multiyear agreement, which returns the excitement of the NTT INDYCAR SERIES to the Iowa Speedway. Hy-Vee will provide broad support for next year’s doubleheader event set for July 23-24, 2022, through a wide-ranging partnership that will bring INDYCAR racing back to the 0.875-mile oval after a one-year hiatus.

The NTT INDYCAR SERIES was among the first to race on the D-shaped layout when it made its debut in Newton, Iowa, in 2007. Quickly known as a favorite of fans and drivers alike, the NTT INDYCAR SERIES has held 15 races at the track known as “The Fastest Short Track on the Planet” since it opened in 2006.

Drivers will now have another chance to race at Iowa Speedway as Hy-Vee and the NTT INDYCAR SERIES announced that the Hy-VeeDeals.com 250 will take place Saturday, July 23, and the Hy-Vee Salute to Farmers 300 will occur Sunday, July 24.

“We’re extremely pleased to return Iowa Speedway to the NTT INDYCAR SERIES calendar,” said Roger Penske, founder and chair of the Penske Corporation and owner of the NTT INDYCAR SERIES. “Over the years, Iowa has proven to be a fitting showcase for North America’s premier open-wheel series. A key oval and a hallmark on our schedule, we deeply missed seeing our fans in Iowa this year and look forward to what’s ahead.”

Plans for the 2022 NTT INDYCAR SERIES event include several additional entertainment activities, making for a festival-like atmosphere throughout the weekend.

“With our strong connection to local communities and involvement in the state, we plan to host an event that will receive national attention and make Newton an annual destination for racing fans,” said Randy Edeker, chairman, CEO and president of Hy-Vee. “The weekend will be filled with multiple attractions and events that celebrate everything that is great about Iowa and NTT INDYCAR SERIES racing.”

West Des Moines, Iowa-based Hy-Vee was first involved in the NTT INDYCAR SERIES when the supermarket chain was the primary sponsor for Rahal Letterman Lanigan (RLL) Racing’s No. 15 car in Race 2 of the 2020 Iowa Speedway doubleheader. Driven by Graham Rahal, the Hy-Vee Honda finished third. It later sponsored the team’s No. 45 car driven by Spencer Pigot in the 2020 Indianapolis 500. In 2021, Hy-Vee provided primary sponsorship of RLL’s No. 45 car, driven by 2019 Indianapolis 500 Rookie of the Year Santino Ferrucci, for the Indianapolis 500 and other selected events, and was the primary sponsor of Rahal’s entry at Road America as well as this Saturday’s race in Madison, Illinois.

“The state of Iowa made a commitment to the sport of racing when the Iowa Speedway was built, and today’s exciting announcement of Hy-Vee’s partnership with the NTT INDYCAR SERIES reaffirms that,” said Iowa Governor Kim Reynolds. “Iowa is well suited to be an INDYCAR destination for racing fans nationwide, and I encourage Iowa businesses and organizations to support the success of this event in whatever way they can.”

“The state is rich with racing history and has a strong appreciation for INDYCAR and its terrific drivers and teams,” Penske said. “The fantastic addition of Hy-Vee and their commitment to our sport underscores the added value. Thanks to Hy-Vee and the State of Iowa for welcoming the return of INDYCAR racing to Iowa Speedway.”

Two-time NTT INDYCAR SERIES champion Josef Newgarden is a three-time winner at Iowa Speedway and the most recent to celebrate in victory lane. Other champions at the track include four-time Indianapolis 500 winner Helio Castroneves along with “500” and NTT INDYCAR SERIES champions Simon Pagenaud, Ryan Hunter-Reay, Tony Kanaan and Dario Franchitti.

The entire 2022 NTT INDYCAR SERIES schedule will be announced at a later date. For more details about this event and to sign up for ticketing information, visit www.INDYCARatIowa.com.

It is expected that this rumor will become ‘fact’ this coming Thursday when Iowa will be announced at a scheduled press conference to be back on the IndyCar schedule in 2022 with Rahal Letterman Lanigan Racing sponsor HyVee as the race sponsor.

According to Adam Stern of Sports Business Journal, IndyCar is in advanced talks with, NASCAR, who owns the track, about a deal to restore Iowa Speedway to the IndyCar schedule in 2022, with HyVee likely to serve as title sponsor of the prospective race, per sources.