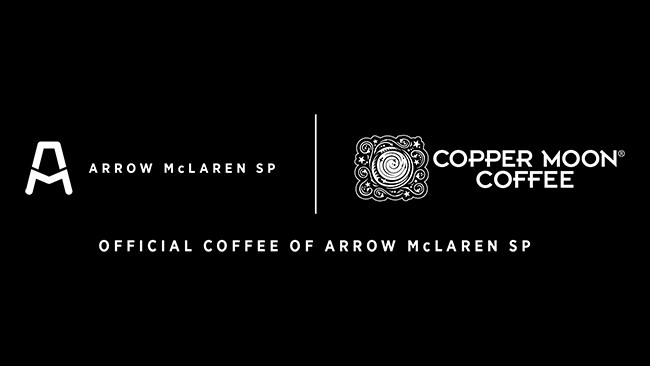 Arrow McLaren SP announced today a continuation of their partnership with Indiana-based company Copper Moon Coffee. Arrow McLaren SP, a team that has won two races in the NTT INDYCAR SERIES so far in 2021, first partnered with Copper Moon in 2017, and the duo has been a winning blend ever since.

“Copper Moon has been a great partner of ours for many years now, and we are excited to continue the partnership,” said Taylor Kiel, President of Arrow McLaren SP. “The entire team drinks Copper Moon Coffee every day, whether we are at our shop in Indianapolis or at race tracks across the country. We have a lot of early mornings in this sport, and coffee gets us going on time.”

The partnership will see Copper Moon Coffee continue to fuel all of Arrow McLaren SP’s coffee needs at the shop and at the track.

“As lifelong IndyCar fans who are passionate about world-class racing and out-of-this-world coffee, we are inspired by Arrow McLaren SP’s success on the racetrack and their love for our coffee,” said Brad Gutwein, CEO of Copper Moon Coffee. “We are honored to continue fueling the team as they reach for victory lane.”

See Arrow McLaren SP drivers Pato O’Ward and Felix Rosenqvist in action this weekend at the Indianapolis Motor Speedway road course, and tune in to watch the Big Machine Coolers Grand Prix at 12:30 p.m. ET on NBCN on Saturday, August 14.